GRETA THUNBERG appeared to have the last laugh in her feud with Donald Trump as she took to Twitter to mock the former president.

On Wednesday, shortly after Trump had officially left his post, the Swedish activist stuck the sword in, recycling a tweet that he'd posted about her 16 months ago.

"He seems like a very happy old man looking forward to a bright and wonderful future. So nice to see," Thunberg wrote, underneath a photo of Trump boarding a helicopter on his way out of the White House.

She'd been biding her time.

He seems like a very happy old man looking forward to a bright and wonderful future. So nice to see! pic.twitter.com/G8gObLhsz9

Trump was of course unable to respond due to the ban he received by Twitter earlier this month in response to part he played in inciting the Capitol riots in Washington D.C.

The tweet was in direct response to one Trump had written about Greta following her speech to the United Nations in September 2019, where she famously told attending delegates: "You have stolen my dreams and my childhood with your empty words," due to their inaction on climate change.

Trump made fun of the then 16-year-old by tweeting: "She seems like a very happy young girl looking forward to a bright and wonderful future. So nice to see." 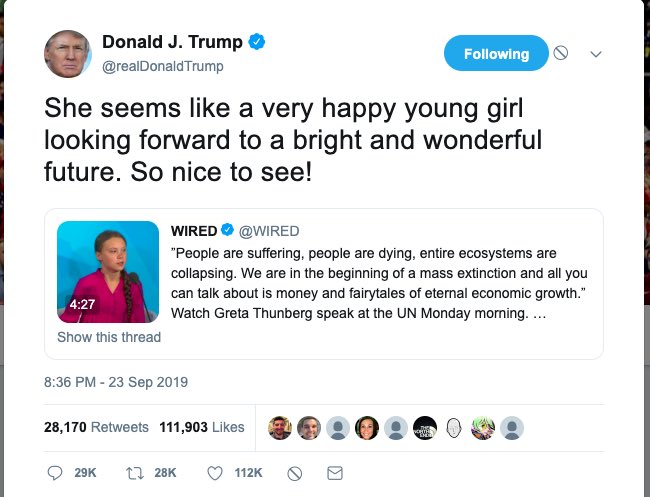 The Trump-Thunberg feud has been quietly raging ever since.

Last year, Thunberg was pictured giving Trump an icy stare as he spoke during a UN conference, while the former president was reportedly angry when the teenager beat him to the prestigious Time Person of the Year award in 2019.

Revenge is a dish best served cold, I suppose.