'He was a freedom fighter, not a terrorist' - Gerry Adams on Martin McGuinness

Speaking at Derry City Cemetery, President Adams spoke of how the former leader and Deputy First Minister was a "formidable person."

"Ireland lost a hero, Derry lost a son, Sinn Féin lost a leader, and I lost a dear friend and comrade.

President Adams also said how Mr McGuinness would not be surprised at the comments made about his life, but instead "answered for him".

"He would be the first to say that these people are entitled to their opinions, particularly those who suffered at the hands of the IRA," he said.

"But let me take issue with those in the editorial rooms or in the political ivory towers, who denounce Martin McGuinness as a terrorist.

"Martin cannot answer them back, so let me answer for him.

"Martin McGuinness was not a terrorist," he said.

"Martin McGuinness was a freedom fighter. 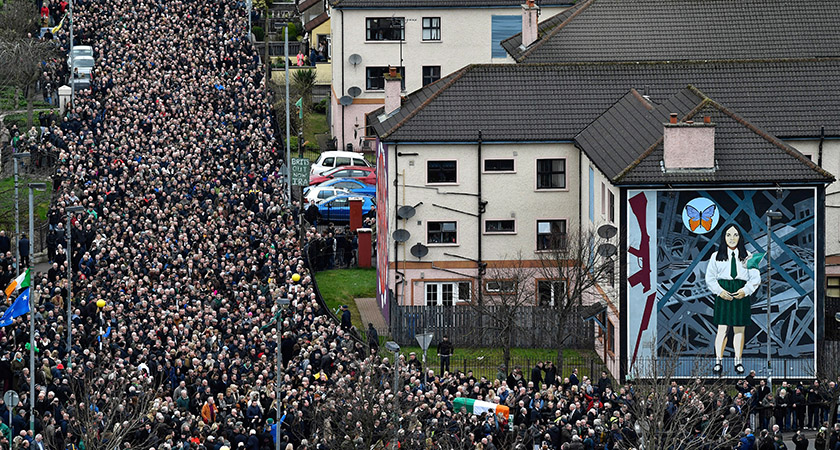 "He was also a political prisoner, a negotiator, a peace maker, a healer," he continued.

"Thanks to Martin we now live in a very different Ireland, an Ireland that has changed utterly.

"The future can now be decided by us, it should never be decided for us."

Martin McGuinness died on March 21, aged 66, after a short illness.

He is survived by his wife Bernie, and children Gráinne, Fionnuala, Fiachra and Emmet and his grandchildren.

At his funeral last Thursday, March 24, crowds lined the streets leading to the church, while inside St Columba’s political figures past and present gathered to pay their respects.

Also in attendance, the former President of the United States and friend Bill Clinton, who flew in for the service and spoke of Mr McGuinness during the funeral.

“I liked him, they asked me to speak for three minutes, but he could do this in 30 seconds; I could just hear him now, ‘Here’s my eulogy, I fought, I made peace, I made politics.'

President Clinton also said that if those in attendance wanted to honour Martin McGuinness’ legacy then “continue his legacy, make your own and finish the work of peace so we can all have a future together.”