Andrea Bocelli says it is 'an honour' to perform for Pope Francis (Image: Getty)

IT has been confirmed that world-renowned tenor Andrea Bocelli will perform for Pope Francis at the upcoming Festival of Families concert at Croke Park.

The concert is part of the World Meeting of Families 2018, which begins on August 21 and culminates with the pontiff’s visit to Ireland on August 25-26.

Bocelli will join acts already announced for the event including Daniel O’Donnell, Nathan Carter, The Riverdance Troupe and Moya Brennan.

The tenor said it was an honour to be able to sing for the Pope in Dublin.

“Singing before Pope Francis is a privilege for our soul; it is an honour for what the Supreme Pontiff represents in the world,” he said.

“For the indescribable human fragility, typical of the average man such as myself, it brings me great pleasure and immense satisfaction to even have the privilege to be close to a person of such exceptional importance and grace.” 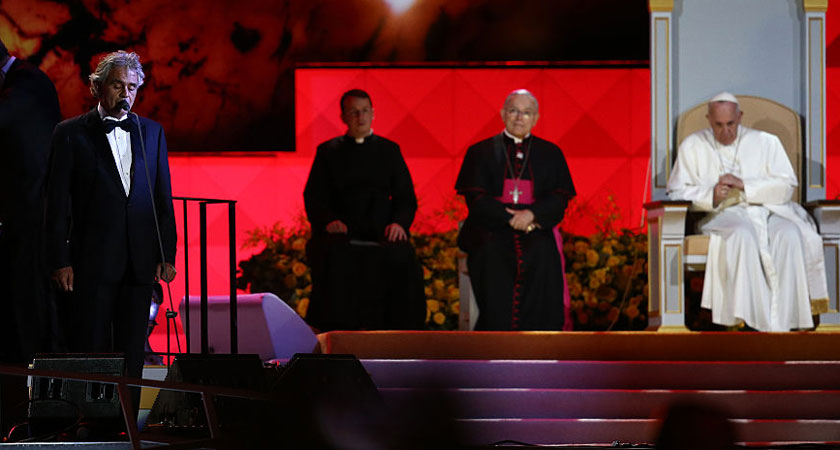 Bocelli performed for the Pope at the last Festival of Families concert in 2015 (Image: Getty)

Father Timothy Bartlett, Secretary General of WMOF2018, praised both Bocelli’s talent and ‘love for his faith’.

“We are delighted to announce that Andrea Bocelli will be with us for our celebration of family life in the presence of Pope Francis,” said Fr Bartlett.

“We are honoured that he has taken time out of an intensely busy schedule to come to Ireland to be part of our global celebration of family life.”

Bocelli, a devout Catholic, has met Pope Francis and performed for him on several occasions, including at the last World Meeting of Families in Philadelphia in 2015.

Also performing at the event will be an orchestra in excess of 50 musicians; over 700 Irish, Sean Nós and contemporary dancers, including 500 from Irish dance schools across the country; a 1,000-strong choir; 100 community groups and 300 flag bearers.

Andrea Bocelli to perform for Pope Francis at Croke Park