A HUGE ‘Free Palestine’ sign has appeared on Belfast’s Black Mountain in protest at Israel’s soccer match with Northern Ireland.

The 60m x 20m display is accompanied by a large Palestinian flag and the hashtag ‘BDS’ (boycott, divestment, sanctions).

Meanwhile a protest took place at the Broadway Roundabout ahead of the game close to the Windsor Park venue. 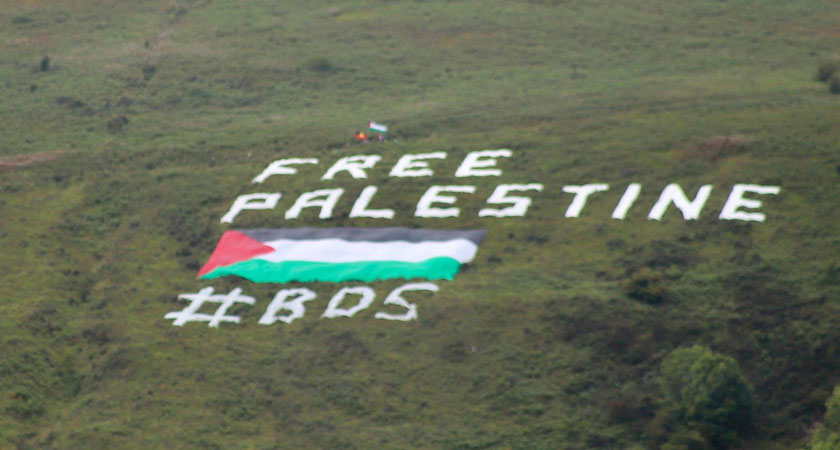 Reports claim there were up to 200 pro-Palestinian protestors, while a counter-protest took place nearby.

Last week Sinn Féin led calls to have the game cancelled, while unionist politicians accused critics of the fixture of 'hijacking' it for political gain.

Those behind the display claim it is a protest at the Irish Football Association’s decision to play the game in light of what it calls Israel’s human rights violations.

In a statement on Facebook, Gael Force Art said: “Israel maintains a system of settler colonialism, apartheid and occupation over the Palestinian people, a history that is all too familiar to our own here in Ireland in which the northern state was built on.

“And so tonight these two soccer teams, who represent two artificial states who have the same prejudice view of indigenous people, play each other in a so-called friendly.”

Meanwhile as protestors gathered close to Windsor Park ahead of the game, Gerard Foster from the Irish Republican Socialist Party said it was important to protest sporting events.

“The occupation forces in the West Bank and Gaza are shooting Palestinian football players in feet so they cannot play football again,” he said, “so anyone trying to say we shouldn’t be protesting a sporting event, think about that.

“Sport is a legitimate target for protest. End the occupation, give the Palestinians their rights.”

The Irish Post has contacted the Israeli Embassy in London, which has jurisdiction for Northern Ireland, for comment.

Just arrived in Belfast supporting my friend for the match against Israel. Looks like Jeremy Corbyn arrived before me. Free Palestine flag on the hills. pic.twitter.com/Hk5JPVDHeo

West Belfast will always stand side by side with the oppressed nations of the world. End the genocide of Gaza. Free Palestine! pic.twitter.com/Rr8PPOuGN6