TRIBUTES have been paid to the three people killed by the freak storm Ophelia in Ireland on Monday as work continues to restore power to over a quarter of a million homes.

The fatalities occurred in three separate counties yesterday in tragic accidents related directly to the strongest storm Ireland has faced in recorded history.

The first death caused by Ophelia on Monday occurred at around 11.40am in Aglish, Co. Waterford.

Clare O’Neill, 58, was killed when a tree fell onto her car just a day before her 59th birthday.

Nursing worker Mrs O’Neill, whose mother suffered injuries in the incident, was pronounced dead at the scene.

Local shopkeeper Richard Hurley told MailOnline: “She was a very jolly woman and always seemed to be happy and cheerful.

“She was very friendly and if I ever did anything for her, she was always very appreciative.”

The second fatality caused by Ophelia occurred at around 12.30pm in Cahir, Co. Tipperary.

Michael Pyke, 31, was killed as he attempted to clear a fallen tree with a chainsaw when another tree collapsed onto him.

Emergency services were called to Ardfinnan Road where the incident occurred but Mr Pyke was pronounced dead at the scene.

Mr Pyke's friend Liz Davies said he was "a lovely young man taken far too soon" and would be greatly missed. 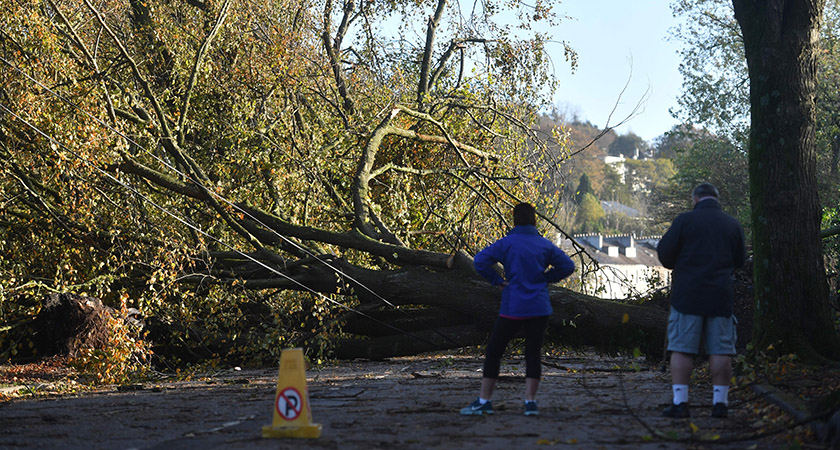 Residents look at fallen trees that were blown down by Storm Ophelia in Cork on Monday (Picture: Ben Stansall/Getty Images)

“He grew to be such a lovely young man and now he is reunited with his mum. I am praying for his dad, his sisters and brothers and his whole family, that they can find the strength to get through this awful time," she told the Irish Sun.

“My thoughts are with them all, they are such a beautiful family.”

The third and final death on Monday occurred at approximately 2.45pm in Dundalk, Co. Louth.

Fintan Goss, 33, died after a tree collapsed onto his car while he was driving home from work in the Ravensdale area.

He said: “Fintan and the Goss family are extremely well regarded in the community.

“He will be greatly missed by his friends, family and the local community in Ravensdale. Our thoughts are with his family at this terrible time.”

“We have had three tragic deaths but the most important thing is that no-one else loses their life,” Mr Varadkar said.

“There are still dangers even if the storm is gone.”

More than 245,000 homes across Ireland continue to be without power after the devastating storm made landfall in the southern counties shortly before midday on Monday.

Local council workers have been removing fallen trees and collapses power lines from roads in a bid to get Ireland back up and running as soon as possible.