CONOR MCGREGOR has sparked fresh concern after telling fans “I will never kill myself” in a rambling Facebook post.

The Notorious took aim at online trolls in the message, which was post just days after the UFIC icon was questioned by police in Corsica amid allegations he flashed his private parts at a bar in the French region.

McGregor was arrested last Friday but subsequently released without charge, pending the results of further tests.

The Irishman first broke his silence on the arrest in a now-deleted tweet in which he said he “could not go on”.

Many interpreted the message as indicating the fighter was feeling suicidal.

However, McGregor has moved to dismiss those claims in his latest social media post, telling fans he would never take his own life "no matter how many people wish for it".

"I will never kill myself no matter how many wish for it,” he wrote.

McGregor also appeared to address the accusations he is currently facing, telling followers of how he had faced false claims before from people who were after a slice of his fortune.
McGregor said: "Never will I fold! The truth is the truth and it gives me wings!

"The truth is power! I am free!

"Never will a dime be paid to anyone coming at me with vicious lies! Not now not f***ing ever!

"I will fight! And I am only beginning my fight!

"I will not allow these people to just accuse me and then disappear into the dark to attempt to ruin someone else's life! No f***ing way!" 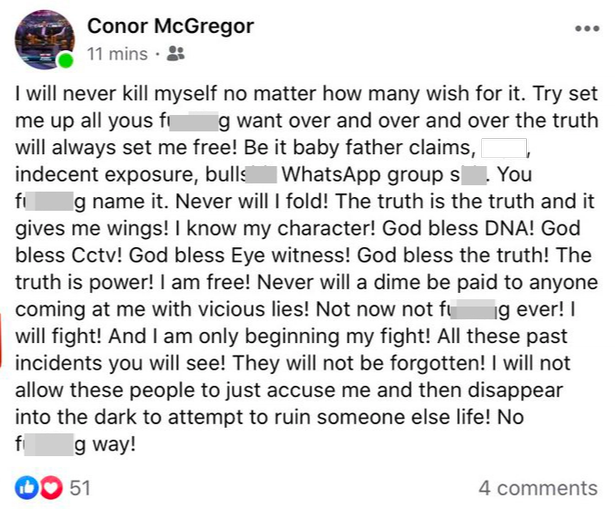 The erratic nature of the post sparked renewed worry among McGregor’s fans.

The Irishman’s previous remark, in which he stated he “can’t go on like this” was in response to a troll on Twitter who alerted him to a BBC story in which the fighter was described as
“English”.

Commenting on the story, the user said: "They can have him. The BBC is correct, [Conor McGregor] is English."

McGregor responded: "[You work in] suicide intervention yet [you are] ridiculing me in this manner online, at this horrendous time in my life.

"I am trying to stay strong for my kids and the people that rely on me and that love and support me. Thanks for the insults, hypocrite. 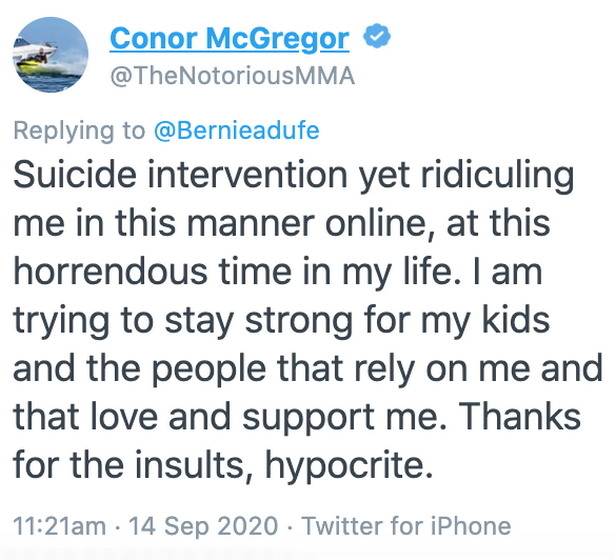 The Irishman stands accused of allegedly exhibiting his private parts to a young woman during a trip to Calvi on September 6.

McGregor was arrested last Friday, just a day before he was due to take part in a 180km, 24-hour charity water bike race from Calvi to Monaco with Princess Charlene.