THE Late Late Show's annual Christmas Toy Show is set to be turned into a magical stage musical.

Toy Show The Musical was announced on Friday's Late Late Show by host Ryan Tubridy and will premiere in Dublin on December 1o.

The musical is billed as a story about family, tradition and how the magic of the Toy Show brings the whole world together each year for one truly amazing night.

Friday night's Late Late Show also gave viewers a taste of what to expect from the musical, as singer RuthAnne Cunningham performed the show's lead song, All the Same.

The Irish Grammy nominee, who has composed the songs for the forthcoming show, said All the Same aims to bring people together.

"When I was approached by RTÉ to compose the music for the Toy Show The Musical, they sent me the story and I immediately thought of this song I had written with Jennifer Hudson And Busbee," she said.

"I felt it was special with a relatable lyric that fitted in with the story perfectly, so I sent it over to the producers and they loved it instantly and wanted it to be a part of this show.

"It's an important lyric for children of all ages to remember that everyone in life is often feeling a lot of the same things, wanting the same things and going through more than we realise on the surface.

"As humans we really are all the same and the song aims to remind everyone to unite and support each other, be kind to each other and love each other."

The festive special has become an Irish Christmas television institution since it first aired in 1975, so demand for tickets for the stage adaptation is sure to be fierce.

Promising to he full of fun, laughter and love, audiences will see how the Toy Show allows children to teach us that the magic they need to change their world already exists within them. 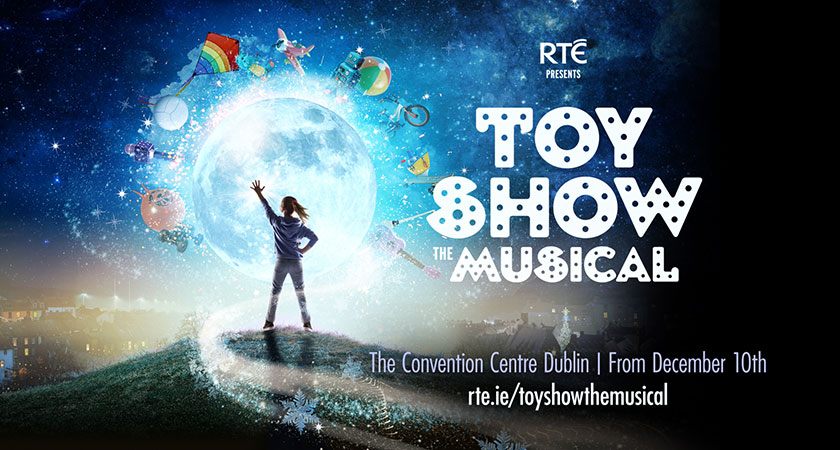 The musical will show how the magic of the Toy Show brings the whole world together each year for one truly amazing night (Image: RTÉ)

The show will be directed by Séimí Campbell, whose recent work includes Gary Barlow's A Different Stage.

Speaking about Toy Show The Musical, he said: "It's an honour to come back home to direct a new, original musical that celebrates the incredible tradition of the Toy Show; the magic of childhood, resilience of family and the power and significance of play."

The show will run from December 10, 2022 at the Auditorium at Dublin’s Convention Centre.

For information and to purchase tickets, visit rte.ie/toyshowthemusical.