After winning a surprise majority in Thursday’s general election, the Prime Minister confirmed this week that Ms Villiers – who was re-elected in her Chipping Barnet seat with a 7656 vote majority – will retain her NI cabinet seat in his reconstituted government.

"I welcome the re-appointment of Theresa Villiers as Secretary of State for Northern Ireland,” Mr Flanagan said, after talking to Ms Villiers yesterday afternoon.

“With this important cabinet role now filled, there is no time to lose in getting down to business,” he added.

“I have already had a constructive discussion with Secretary of State Villiers on our priorities and the challenges that lie ahead.  In particular, we discussed the crucial work that remains to be done in implementing the Stormont House Agreement.”

His welcoming words follow those of Taoiseach Enda Kenny, who was one of the first to congratulate Mr Cameron when news of his majority win was confirmed last Friday.

“I send warm congratulations and best wishes to David Cameron on his re-election as British Prime Minister,” the Taoiseach said. 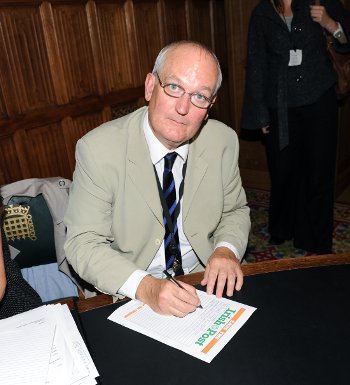 "I look forward to my next meeting with the Prime Minister to build on our very close relationship and to continue our work on sustaining and developing the strong and positive relationship that exists between our two countries," he added.

The Irish in Britain organisation has also reached out to the new parliamentarians who will now take up seats in the House of Commons, while saying a fond farewell to the many outgoing MPs who were friends of the Irish community.

“We look forward to working with the recently elected members of parliament to raise awareness of the Irish community’s interests and concerns,” Irish in Britain CEO Jennie McShannon told The Irish Post today.

“Most importantly, however, we say a huge thanks and a farewell to many parliamentary friends of the Irish community who have been so supportive over the years - in particular Chris Ruane, who gave so much of him time in chairing the APPG and will of course be greatly missed as a parliamentarian and as a staunch supporter of the community.”

She added: “Also Simon Hughes, Stephen Lloyd and others who retired, such as Peter Hain and Paul Murphy, both who had such key roles in building relationships between Britain and Ireland.”

The organisation also welcomed newly-elected MP Conor McGinn, who takes up the St Helens North seat in Merseyside for Labour.

Their sentiments were echoed by the Irish community in Liverpool, where Liverpool Gaelic League spokesman Tony Birtill said: "We were delighted to see Conor McGinn interviewed in Irish direct from St Helens by Seán MacSíthigh on Nuacht TG4 in the run-up to the election. As far as we know, he is the first ever Irish-speaking MP for a Merseyside constituency and it is the source of great pride to us to have such a representative in the area."

As the dust settles on the general election 2015 the Irish in Britain organisation has pledged to press the newly-elected government to represent the community effectively.

“As we see a new parliament take shape, Irish in Britain will continue to seek voice for the community’s most pressing concerns,” Ms McShannon confirmed.