The Irish national was arrested in connection with the murder of a rough sleeper who had no legs (Image: Policía Nacional)

AN Irish woman has been arrested in Gran Canaria following the brutal murder of a wheelchair-bound homeless man on the holiday island earlier this year.

The woman, aged 50, was detained alongside a 43-year-old Spanish man over the grisly killing back on January 11.

They are accused of strangling the 61-year-old victim to death before attempting to burn his body using an accelerant at an abandoned building where he slept in San Bartolome, Tirajana to the south of the island.

The victim was a homeless Romanian man who used a wheelchair because both of his legs had previously been amputated.

Police have confirmed the Irish woman – who has not been named – is a local resident and has no previous convictions.

The force also revealed that the two suspects and the victim were known to each other, but refused to elaborate on the nature of their relationship. 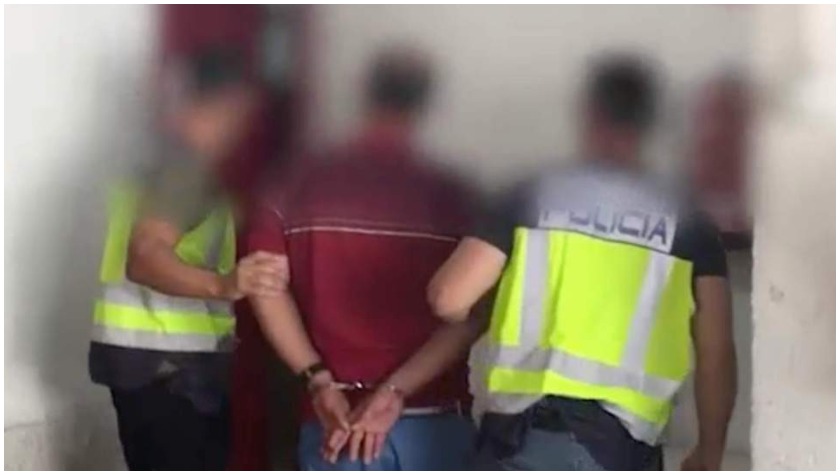 In a statement, a spokesperson for Spain's National Police Corps said: "National Police have arrested in San Bartolome de Tirajana a 43-year-old man and a 50-year-old woman as the suspected authors of a crime of murder.

"The arrested man is Spanish and the arrested woman is Irish. Both live in the south of Gran Canaria.

"The victim, a 61-year-old Romanian of no fixed abode, was sleeping in an abandoned building in San Bartolome de Tirajana and moved around in a wheelchair after having both legs amputated.

"He was strangled at the place where he used to sleep and then burnt after having accelerant poured over him.

"An intense police investigation lasting two months has led to the identification of the suspected authors of the January 11 murder."

Police also released footage of the Irish woman being detained with her face pixelated.

A spokesman added: "Officers armed with a search warrant raided the home of the two people under investigation and seized several items of clothing they are thought to have been wearing the day of the crime.

"They have been handed over to a judge for further questioning."

The two accused are expected to appear in court this week for a hearing which will be held behind closed doors.

An investigating judge will first decide whether to remand the suspects in custody or release them on bail pending an ongoing probe.