A CO. MONAGHAN man has been named Lutonian of the Year at this year's Luton’s Best Awards.

Peadar McKenna, who moved to the town in the 1960s, was presented with his award at the Luton Hoo Hotel on Friday, November 24.

The glitzy event, which was compered by broadcaster Andrew Castle, saw Peadar take the top prize, which recognises an individual’s outstanding achievements in promoting Luton as a town to be proud of.

Clontibret native Peadar, 74, was also runner up in two other categories – Luton’s Most Outstanding Citizen and Volunteer of the Year.

Since retiring 14 years ago, Peadar has dedicated his life to full-time volunteering,

In that time he has fundraised and supported charities including Luton's NOAH Enterprise, Luton Foodbank and Breast Cancer Research. 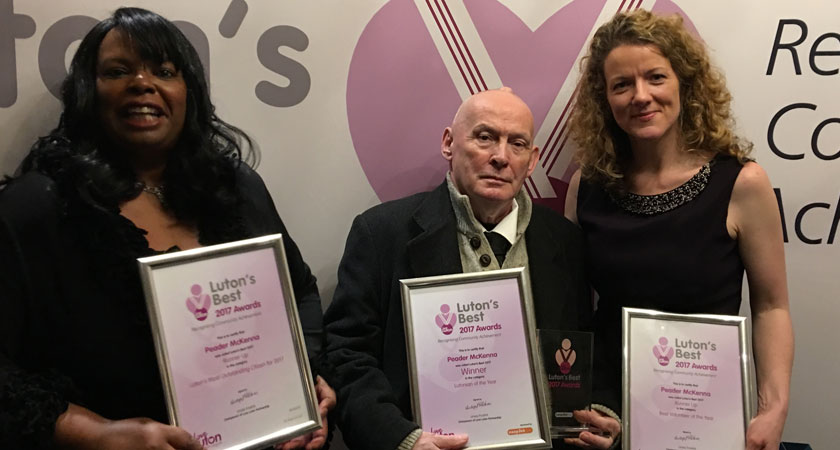 A former governor for Luton & Dunstable Hospital, he served on clinical commissioning groups and other NHS committees.

He also helped fundraise for the hospital’s neonatal unit and chapel refurbishment.

Although proud of his Irish identity, Peadar has always been determined to learn more about other cultures.

Knowing personally how daunting it is to be in a new country far from home, Peadar has welcomed new residents to Luton from abroad and shown them the best the town has to offer.

For health reasons, Peadar is calling time on his fundraising after December, so the award is a fitting tribute to the modest Irishman's hard work and dedication.

An amazing man who has given so much to Luton and now ill health is forcing him to retire. Peadar McKenna has volunteered for decades, raised £000s & originates from County Monaghan. He encaptures living a life embracing diversity. Well done to him ⭐️#LutonsBest#kindness