ISRAEL'S Prime Minister has vowed to "act aggressively" against Ben & Jerry's decision to pull their product from what they've described as 'occupied Palestinian territory'.

The American ice cream makers will no longer sell anything in the area known as West Bank, or the contested east Jerusalem, wading in to the extremely layered issue of the ongoing Israel-Palestine conflict.

"We believe it is inconsistent with our values for Ben & Jerry’s ice cream to be sold in the Occupied Palestinian Territory (OPT). We also hear and recognize the concerns shared with us by our fans and trusted partners," Ben & Jerry's statement read.

"We have a longstanding partnership with our licensee, who manufactures Ben & Jerry’s ice cream in Israel and distributes it in the region. We have been working to change this, and so we have informed our licensee that we will not renew the license agreement when it expires at the end of next year.

"Although Ben & Jerry’s will no longer be sold in the OPT, we will stay in Israel through a different arrangement. We will share an update on this as soon as we’re ready."

In response, Israel's ambassador to the US, Gilad Erdan, has urged state governors to impose anti-boycott laws, to punish the company.

Ben & Jerry’s will end sales of our ice cream in the Occupied Palestinian Territory. Read our full statement: https://t.co/2mGWYGN4GA pic.twitter.com/kFeu7aXOf3

He said the move would have "serious consequences, legal and otherwise," and Israel "will act aggressively against all boycott actions directed against its citizens."

"As Arab nations cancel their decades-long boycott of the Jewish state and sign peace agreements with Israel, and cultural and economic cooperation in our region is growing, American companies with radical ideological agendas cannot be allowed to go against the policy of the United States and act against normalization and peace," Erdan said.

"Moreover, the past has proven that the citizens of Israel are never the only ones who suffer from such boycotts as these significantly harm Palestinians as well." 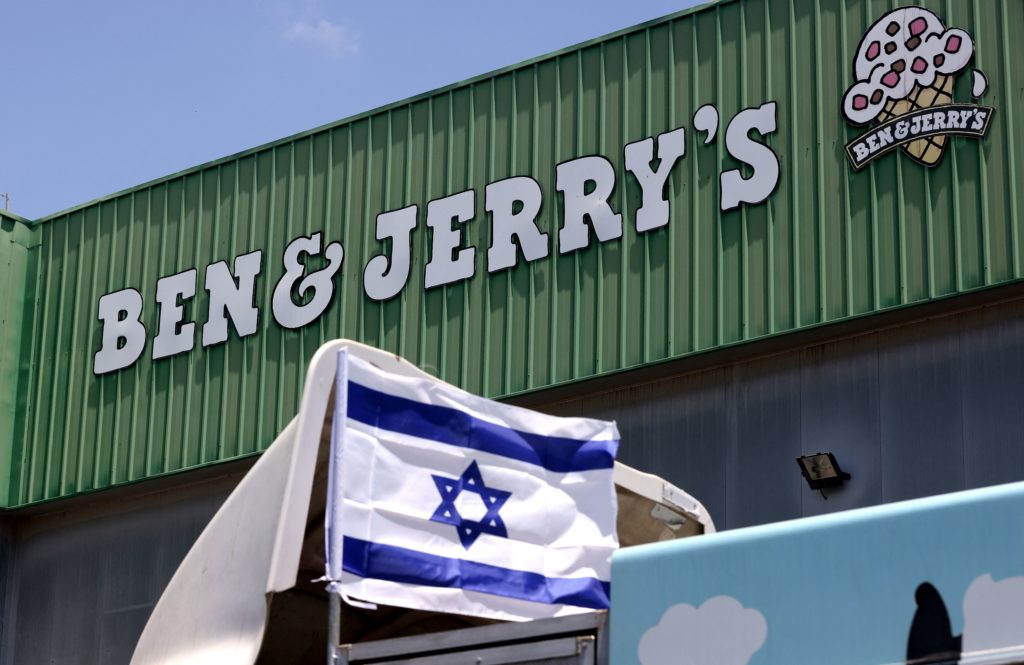 An Israeli flag is set atop a delivery truck outside US ice-cream maker Ben & Jerry's factory in Be'er Tuvia, on July 21, 2021. - Ben & Jerry's announced that it will stop selling ice cream in the Israel-occupied Palestinian territories since it was "inconsistent with our values", although it said it planned to keep selling its products in Israel.