A BATTERED tambourine used by Liam Gallagher on the recording of Oasis' What's the Story (Morning Glory)? album has fetched £3,600 at auction.

The instrument, which was almost thrown away after the recording session, sold for more than seven times its top estimate at the auction on November 2.

A British-based internet bidder landed the tambourine, which had a guide price of £300-£500.

Josh McCarthy, music memorabilia valuer at Hansons Auctioneers in Derbyshire, said the price paid for the instrument "took my breath away".

What's the Story (Morning Glory)? was recorded in early 1995 and propelled Oasis to global stardom after its release in September that year.

Featuring the No. 1 hits Don't Look Back in Anger and Some Might Say, as well as Wonderwall and Roll With It, the album was one of the most important records of the Britpop era. 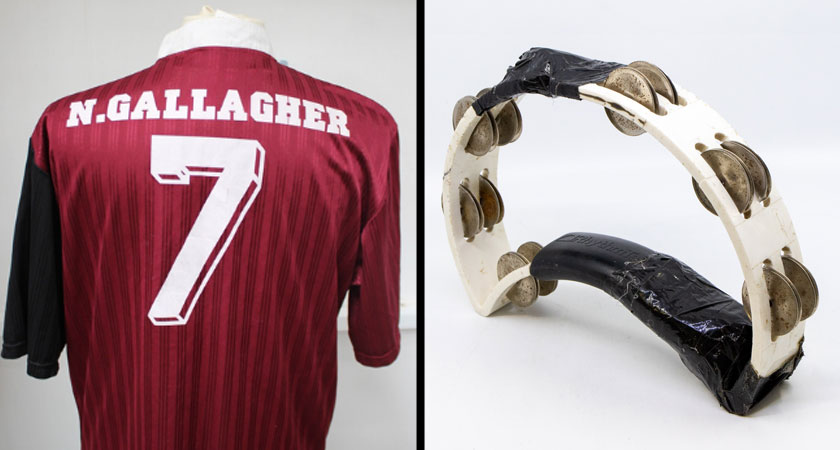 The tambourine and a football shirt went under the hammer (Image: Hansons Auctioneers)

The tambourine was set for the bin after taking a battering during the recording session, but was salvaged by sound engineer Nick Byrne.

It was subsequently used on recordings by other bands such as Kasabian, Arctic Monkeys and The Verve.

Two personalised Oasis football shirts that were gifted to Byrne during the recording of Oasis' third album, Be Here Now, were also up for auction.

"I was thrilled to bring these rock treasures to auction, and always hoped they'd do well," said McCarthy.

"Nevertheless, the price achieved for the tambourine took my breath away.

"Thanks to Nick, the provenance was second to none and that sparked worldwide interest.

"It was an opportunity to own a slice of British rock history."