LINDA Nolan has said she is 'scared of dying' as she opened up about her secondary cancer diagnosis on Monday's Loose Women.

Dublin-born Linda, 58, opened up on the programme today, September 11, in a segment called My Cancer Diaries which will air on Loose Women each day this week.

The segment documents Linda coming to terms with her diagnosis as she prepares for her first scan this week after undergoing radiotherapy since her secondary diagnosis in March.

The former popstar had been in remission from breast cancer for six years, but just six months ago a fall at her home revealed that the cancer cells had metastasised and spread to her hip bone.

"[They said] it's not curable, but it is treatable and I said to the nurse, 'that's what they said to Bernie.'"

Speaking of her family and sister Bernie - who died in 2013 aged 52 after her breast cancer metastasised - Linda said her diagnosis was 'emotional', but harder for her family.

"It was really emotional because immediately you fear death. It was really hard, but I felt worse for my family, having to go through it all again.

"I sent them all a text saying, 'I'm so sorry to put you through all this again.' I think it is still raw with us, losing Bernie."

"This illness has got no friends, and doesn't have favourites. I don't think we've ever thought we're cursed, we're maybe unlucky."

Speaking of her first diagnosis in 2006, Linda said 'it all happened together', as her husband Brian died in 2007 as she was undergoing treatment and then her mother died just months later.

"I went into a downward spiral of depression and grief," she said. 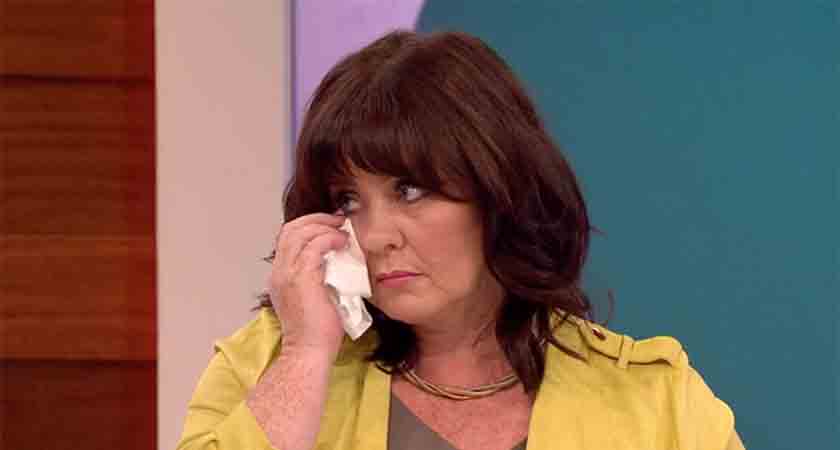 Linda's tearful sister Coleen told her Loose Women co-panellists that the cancer had hit her sister again just as she had 'picked herself up.' (Picture: ITV)

"My husband isn't here, so those times of the night when I wake up and - the first time around - he'd put his arms around me and say it's ok, and I would think it is ok because he's here.

"I still wake up in the night, he's not there and it's a double blow. I do miss that one person that you can be 100 per cent raw with."

Just seven years ago, Linda says, she 'wanted to die, to be with Brian.'

"There was a time when I was suicidal, and wanted to die and be with Brian. I did consider taking my own life but thankfully I got help.

In the segment, Linda also revealed how, when it comes to the end of her life, she plans to spend it in a hospice, and will not use chemotherapy 'for another six months of life.'

"I said I won't have it, if it's just for another six months of because I would rather have another three months and not have to go through the side effects of chemo.

"I don't want my bothers and sisters to become my carers... I just want them to come and spend happy times at the end of my days."

After the segment, Linda's sister Coleen tearfully told her Loose Women co-panellists that the diagnosis for Linda was 'mixed emotions' for the family.

"It was such mixed emotions of devastation and so damn angry. Just when she's picked her life up and not feeling guilty about carrying on living, it comes and hits her again. That's the anger."