BE honest lads, we've all thought about this at some point.

Obviously when you're living together, 'mine' and 'yours' fly out the window. It becomes 'ours'. Isn't that lovely?

Desserts are one problem. "I won't order one, I'll just have a bite of yours," ... bugger off! We all know you fully intend to have most of my cheesecake.

Snacks are another problem. Especially if you like the same stuff. Though there are a number of tactics us lads can use to combat this.

Top shelves are good idea. Chances are you're a little taller than your partner, and hiding things in high places can help. But at some point, you'll find a chair next to the fridge and your snacks snarfed.

Buying things they don't like it another option. But you're only limiting yourself with this option. You shouldn't be forced to endure fruit & nut dairy milk just because she's unable to control herself.

But fear not! A man, nay, a legend named Dave Williams has come up with the ultimate solution: A fridge safe. And it might just mean the end of the war.

Dave's fiancée Stacey took to Facebook last week to show the world the lengths her husband-to-be went to to keep her out of his stash.

She wrote: "So this is what it has come too! You buy a house together, have a child together, get engaged, are planning a wedding and doing your house up and this happens!

"Dave goes and buys a f*ckin fridge safe because he's an arsehole and doesn't want to share his chocolate with me anymore! Anyone want him? Surely this is breakup material right?! Pr*ck!"

Dave, you're a genius.

The post went viral, and vast amounts people (lads presumably) got in touch to ask Stacey where Dave had bought it so they could get their hands on one.

Stacey, you've opened Pandora's Box here, and allowed us blokes to close ours! We thank you. 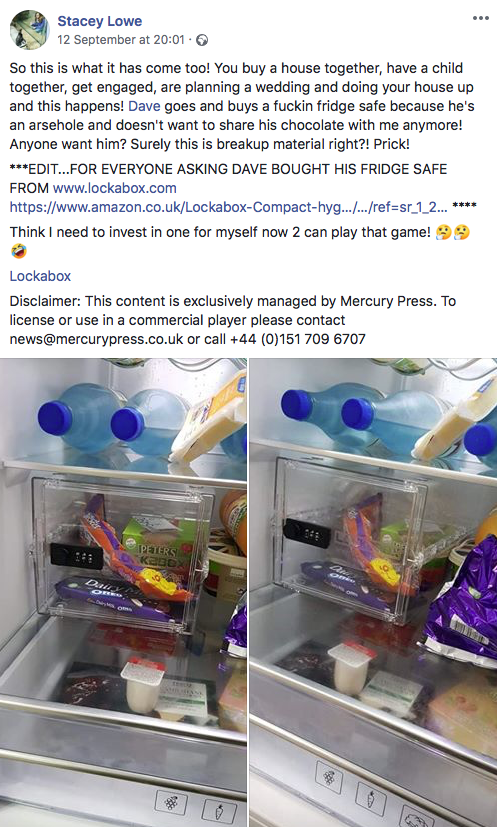