A POLICE investigation is underway after a man died and another man and woman were left critically injured follow an incident involving multiple stabbings in Birmingham City centre.

The knife attack took place in the early hours of Sunday morning, with seven people injured in the incident.

West Midlands police has declared a major incident in the wake of the attacks.

A murder investigation is now under way with Chief Superintendent Steve Graham indicating to reporters that the stabbings are linked.

He confirmed that police are currently searching for one suspect.

Officers were first called to a stabbing in Constitution Hill, north of Birmingham City centre.

Several other knife attacks were reported nearby, with the attacker evidently working north-to-south during his rampage.

He told reporters that officers were called to reports of a stabbing in Constitution Hill, north of the city centre, and the suspect worked north-to-south.

"We are still in the early stages of that inquiry but I can say that we are treating all four of those incidents as a linked series,” Chief Superintendent Graham said.

"We are searching for one suspect and inquiries to identify and then trace that suspect are ongoing."

Despite the nature of the attacks, he was keen to stress there was "absolutely no suggestion" the stabbings are linked to terrorism or that guns are involved.

"It does appear to be a random attack," he added.

West Midlands police issued a statement outlining the facts behind the attacks: “We can now confirm that we’ve launched a murder investigation following the events in Birmingham city centre overnight.

“A man has tragically died. Another man and a woman have suffered serious injuries and five others have also been injured, although their injuries are not thought to be life-threatening.

“We believe the incidents, which took place between 12.30am and 2.20am, are linked and we’re doing all we can to find whoever was responsible.”

They are appealing for witnesses or anyone who may have access to pertinent video footage to come forward. 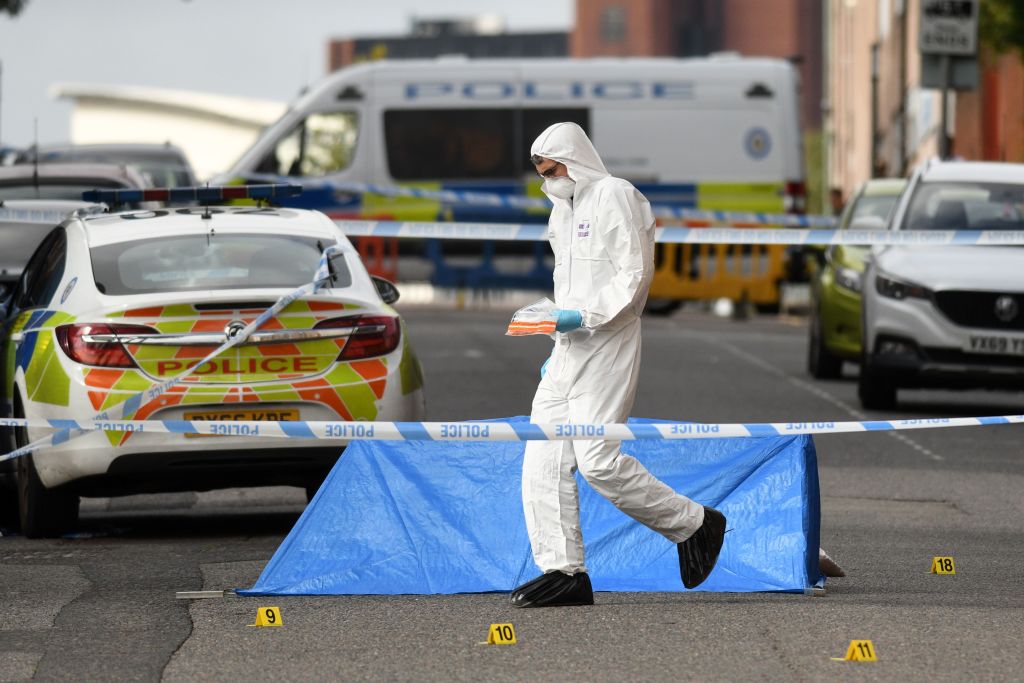 Chief Superintendent Graham described the events as “tragic, shocking and understandably frightening” but insisted every effort was being made to apprehend the suspect.

“Please be assured that we are doing absolutely everything we can to find whoever was responsible and try to understand what exactly happened,” he said.

“We have well-rehearsed plans for dealing with major incidents. Your safety is always our priority and that’s why you’ll see an increase in officers on the streets.

“In the meantime, we’d ask anyone who’s in the city to remain vigilant and report anything suspicious to us.”

Police has been spotted at several scenes across the UK city, including Livery Street, Irving Street and Hurst Street.

Speaking on BBC1's Andrew Marr Show, British Foreign Secretary Dominic Raab acknowledged the attack was a “very serious incident” but refused to be drawn on whether it may have been a terrorist one.

He said: "We know it's a very serious incident. Our thoughts and prayers are with the victims and their families.

"I think at this point in time we don't know too much more than that other than to say the public should be very vigilant."

The West Midlands Police and Crime Commissioner David Jamieson, meanwhile, paid his respects to the victims and their families.

“Last night’s events are truly terrible and have shocked the people of Birmingham, the West Midlands and the country,” he said.

“My first thoughts are with the victims and their families at this time.

“I have every faith in West Midlands Police, who are working extremely quickly on this investigation.

“My thanks also go to the ambulance and hospital staff who are working around the clock to help those who have been injured.”