Officers from Northern Ireland's Maghaberry Prison watched rather than intervene as an inmate blinded himself because it wasn't "life threatening".

A report by the Prisoner Ombudsman for Northern Ireland said that Sean Lynch's self harm episode where he rendered himself blind, was "directly observed by prison officers".

The report, published yesterday, also cites that officers complied with a "strict interpretation" of Governor's Orders which require intervention only if a situation is "life threatening".

Under the Order "life threatening” is defined as “a prisoner with a ligature, with serious cuts, or unconscious, or any unexplained reason where there is no response from them.”

Under these orders, Lynch, aged 25 from Derry, "did not meet the definition", the report read.

The report also condemned officers saying, "it seems remarkable that the officers felt it was neither necessary or appropriate" to enter his cell.

"Their duty of care was trumped by security concerns," it stated, "that appear to have no basis in reality."

From June 2 to June 5 2014, Lynch inflicted a series of "extreme and shocking" self-harm incidents.

On June 2, Lynch tried to choke and drown himself, and used a knife and fork to poke his eyes and face and bit his fingers.

He also asked for his cellmates' razor blades (which were not provided), lifted the TV and hit his head with it.

On June 4, Lynch used a 15 centimetre piece of broken glass from the inside of a flask he found in the bin in his cell to cause an eight centimetre laceration to his genitals.

On June 5, Lynch gouged out his two eyes with his fingers over a 53 minute period, while officers watched. 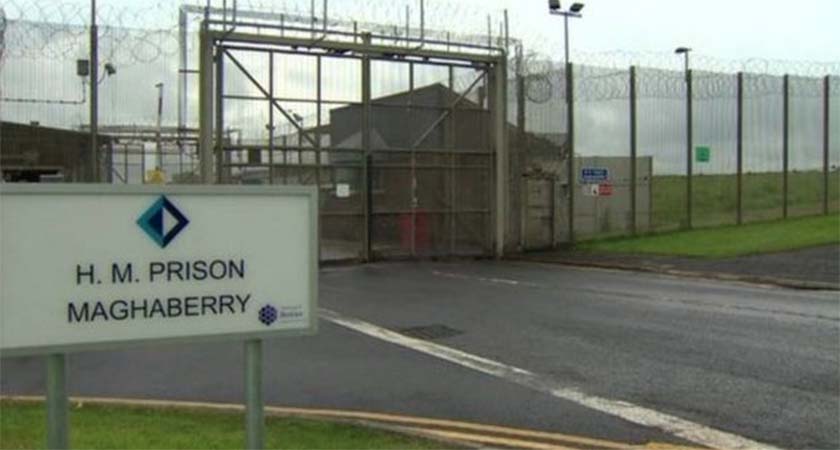 Lynch was in an observation cell under CCTV during the last incident.

Shortly after 8pm on June 5, Lynch, "in a calm and controlled manner" walked to the mirror in his cell with his finger in his left eye.

While he turned away from the camera, the report says "the position of his arm would suggest he continued to injure his eye".

A prison officer observed Lynch's actions for a total of 15 seconds, 12 of which Lynch was on his knees facing the cell door as he continued to injure his left eye.

By CCTV records, details of which are provided in the report, approximately five minutes later Lynch was observed gouging out his right eye.

Afterwards, Lynch could be seen shouting and crying, reporting his blindness.

A short time later just after 20 past eight, Lynch was observed by an officer stumbling and falling in his cell, pulling at the wound to his genitals from the day before.

At five minutes past nine, Lynch ceased self-harming, and was taken to hospital in an ambulance at 9.19pm.

Lynch was charged with assault and criminal damage in November 2013.

He was granted bail but breached the conditions and was remanded to Maghaberry Prison on April 22, 2014.

The Derry man underwent a medical assessment by a Forensic Medical Officer at Strand Road PSNI station, who expressed concern over his "bizarre behaviour".

The FMO then wrote a letter to prison staff, saying a formal psychiatric assessment was an "absolute necessity."

Upon his arrival at Maghaberry, it took two weeks before he was seen by a psychiatrist where he was diagnosed with a drug-induced psychosis.

The Ombudsman's report said Mr Lynch's problems may have been "compounded by an eight day delay" in administering the medication he was prescribed.