AN OIL SPILL in a tributary of the Shannon near Athlone has left dozens of birds of other local wildlife "absolutely caked" in oil.

Birds were found covered in oil near the Al River in an area known as the Big Meadow, including a family of swans who were left badly affected by the spill. 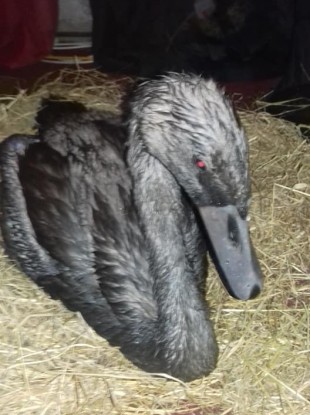 Black swan: Good in the cinemas, not in the rivers

“One of the cygnets was in a very bad state, his whole body was black,” welfare officer with the Athlone Society for the Prevention of Cruelty to Animals Billy Gallagher told TheJournal.ie.

Two adults and three cygnets (baby swans) were found by locals near the spill on Saturday, covered in oil. After being cleaned, the family has been moved to the Kildare Animal Foundation to recover.

John and Una Stroud, a local couple who rescued and cleaned the worst affected cygnet on Saturday had also rescued a cormorant earlier in the week following the spill.

“I rescued a cormorant covered in oil on Thursday. I didn’t realise that the oil was just around the corner,” said John Stroud. 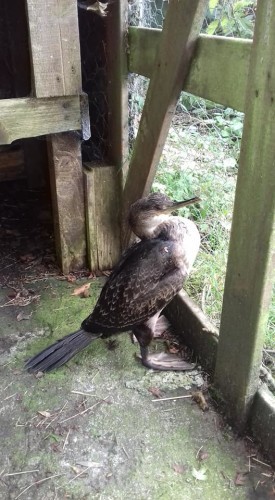 The cormorant which sadly died on Friday

Mr. Stroud returned to the area the following morning after a period of heavy rainfall, when he noticed a lone cygnet sitting in the road.

“I was walking around and saw that in the middle of the road, there was a cygnet sitting there literally covered in oil,” he said.

“It started hissing at me as I picked her up and carried her home.

“She was absolutely caked in thick, black oil. We stayed up all night cleaning her.”

They wrapped a towel around the cygnet to stop her from trying to clean herself, thereby ingesting oil. The family cleaned the cygnet using water, fairy liquid and towels.

Mr. Stroud said they wrapped the cygnet in a towel to stop her from trying to clean herself and accidentally ingesting oil. They then cleaned the little bird with water and fairy liquid, before drying her off again. 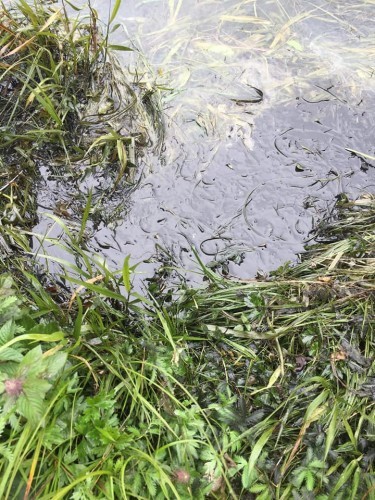 The source of the oil spill has not been confirmed yet

The birds are now being looked after at the Kildare Animal Foundation and according to the shelter’s wildlife manager Dan Donoher, most of them are doing well.

“We took off all the heavy oil from them and stabilised them before doing the proper wash,” Donoher said.

He added that some blood dripped out of a few of the nostrils of the birds, but “they’re doing well now”, though the worst affected cygnet is now reportedly on a drip at a local vet.

The source of the spill has yet to be confirmed.

Westmeath County Council confirmed that it was aware of the oil pollution in the area and deployed a boom in the affected area on Saturday. This is a floating barrier put on the surface of water to temporarily contain spills.

Although oil retention barriers are in place, the council said they "it's clear" that some of the oil has escaped from the tributary into the main channel of the Shannon.

“Westmeath County Council is currently investigating the matter further, and has technical personnel on site to try and confirm the source of the pollution, and determine the next steps,” the council said in a statement.

“We will be taking measures to commence the clean up as soon as practically possible."