A POLICE dog is being hailed as a hero after reuniting a man with his wedding ring after he threw it out of the window of his car in a fit of rage.

Odin came to the rescue of the careless man after he discarded the ring following an angry row with his wife.

It all started when PC Carl Woodall spotted two men acting suspiciously while on patrol in Northfield Road, Harbourne, in the UK at 2am on Saturday morning.

After pulling over to find out what they were up to, the West Midlands Police officer was told they had been looking by the side of the road for some time to no avail.

Thankfully Odin was on hand to lend his nose to their efforts.

It took the canine just two minutes to find the ring – much to the relief of the embarrassed man.

PC Woodall said: “Apparently the man pulled the ring off and threw it in a momentary loss of temper… but very quickly regretted his actions and was desperate to find it.

“Our dogs are trained to sniff out human scent. The men said they’d been looking for quite some time and the ring was quite small, so I wasn’t confident there’d be enough scent for Odin. 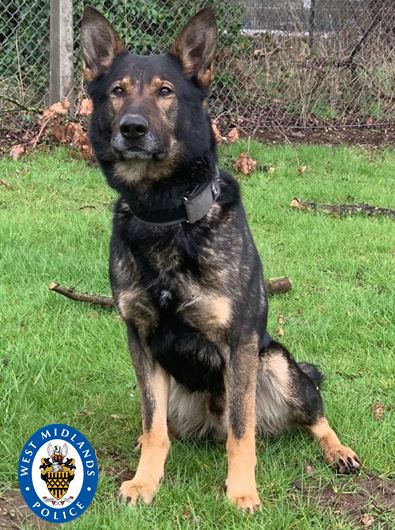 “But he proved me wrong and indicated by the ring in a matter of seconds. It was in grass a couple of inches long. And of course it was pitch black. They could have spent all night and still not found it.

“Odin got a pat and thanks all round. It’s nice to be nice and I was back on patrol in less than five minutes.”

They really are a man’s best friend.