The group posed near the Bangladesh Islamic Centre in Newtownards, Co. Down on Saturday night (Image: Twitter)

POLICE are treating an incident in which a group dressed up as Ku Klux Klan members outside an Islamic prayer house in Northern Ireland as a hate crime.

Images of around 10 people in KKK robes posing for photos near the Bangladesh Islamic Centre in Newtownards, Co. Down emerged on social media over the weekend.

The pictures were taken on Saturday night on Greenwell Street in the town, and were reported to police at around 5pm on Sunday.

PSNI Inspector Richard Murray said: "Our enquiries are ongoing, and we are treating this as a hate incident at this time.

"Hate crime, in all its forms, is totally unacceptable. 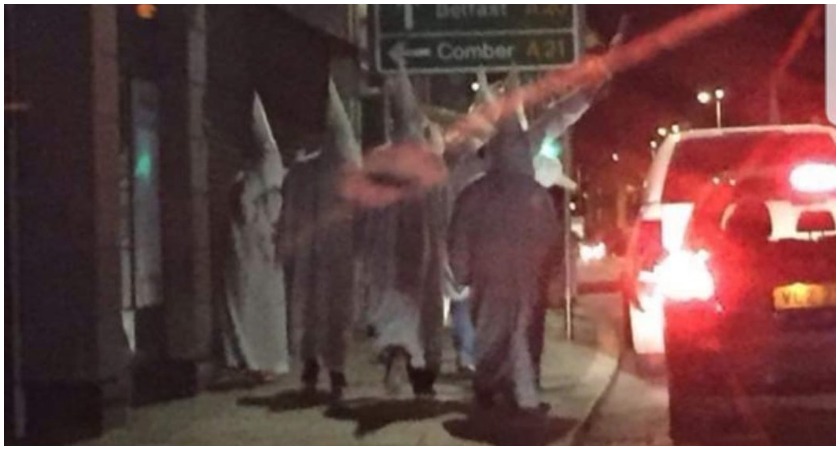 The group were also pictured walking around the town (Image: Twitter)

"It is the responsibility of each and every one of us to ensure that we live in a society where diversity is respected."

One of the images posted over the weekend shows the group in a threatening pose, some with fists raised, outside the Islamic Centre.

In August 2017, a pig's head was left at the Islamic Centre's door and graffiti painted on the building.

Anyone with any information about the incident is urged to contact police on the non-emergency number 101, quoting the reference number 1066 of 28/10/2018.

Alternatively, information can also be provided anonymously to the independent charity Crimestoppers on 0800 555 111.