Poor cat found with 'horrific' burns is rescued in Limerick

A CAT discovered in Co. Limerick with horrific burns has been rescued and is now being treated by an animal welfare group.

It's believed that the poor animal was scalded with boiling water, but is reportedly making "good progress" in her recovery after being rescued, according to breakingnews.ie

The animal welfare group who made the save have since rescued another cat and are now on the lookout for two others suspected of suffering from the same awful burns.

A spokeswoman for the Deel Animal Action Group, based in Newcastle West, spoke of how the group were notified by a local woman who discovered the cats "in tremendous pain" sheltering in her garden, along with a number of kittens.

"So, there are four adults with burns. The kittens in the same colony are in bad health with sore eyes, but they are not burned. We are trapping the kittens as well to get them treatment," said the spokeswoman.

The cats that were scalded had "no ability to fend off their human attackers", she added.

"The ISPCA cruelty officer has been informed and we have spoken to the gardai a couple of times. We will be making a formal statement to the gardai in the coming days," added the spokeswoman.

The first cat to be rescued is reportedly on pain relief after being sedated and treated with antibiotics, and her wounds are said to be healing.

"She is being sedated daily and receiving daily bandages. She is on pain relief and antibiotics. The infection in her wounds is clearing up and she is eating and drinking well, and making good progress," the spokeswoman noted.

"We are currently trying to sort out a foster [home] for her where she can go once the vet thinks she is well enough. She will stay short-term in foster [care] until her skin can heal more.

"We’ve trapped a second one, so there are two in our care at the moment, and there’s reports of a third and fourth one, so we are still trying to get them."

Over €4,000 in donations has been raised to cover the cats' medical bills.

If you wish to donate, you can do so here. 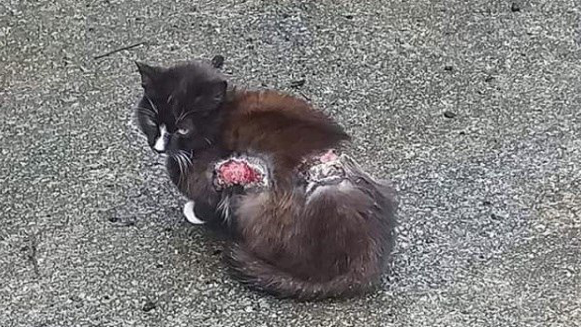