BELFAST, NORTHERN IRELAND - MARCH 4: A bomb disposal unit officer inspects the damaged van following a suspected car bomb attack on a prison officer at Hillsborough Drive on March 4, 2016 in Belfast, Northern Ireland. The 52 year old man, a serving prison officer who was driving the van has been taken to hospital. The attack is believed to have been by a dissident terrorist group. The Northern Ireland First and Deputy First Ministers Arlene Foster and Martin McGuinness have condemed the attack. (Photo by Charles McQuillan/Getty Images)

A PRISON officer has been injured following a bomb explosion under his van in east Belfast, which police warn is part of a dissident republican threat to disrupt Easter Rising centenary commemorations.

The bomb partially detonated when the man drove over a speed ramp at Hillsborough Drive, off the Woodstock Road, at 7.10am this morning.

The 52-year-old was taken to hospital where his injuries are believed to be serious but not life threatening.

It is understood the prison officer works in Hydebank Wood Young Offenders' Centre in Belfast.

A number of residents in Hillsborough Drive have been moved from their homes and an emergency evacuation centre has been opened at the Salvation Army on the Cregagh Road.

The Woodstock Road in east Belfast has been closed at its junctions with Omeath Street and Ravenhill Avenue.

Following the incident, a senior PSNI officer has warned that dissident republicans want to kill members of the security forces in the run up to the centenary of the Easter Rising.

PSNI Assistant Chief Constable Stephen Martin said: "The threat is severe in Northern Ireland. That means an attack is highly likely. We are very worried by the current threat picture.

“Easter is very significant time in calendar, it’s the 100th anniversary of the Easter Rising, so we’re working hard with the people organising many events across Northern Ireland. 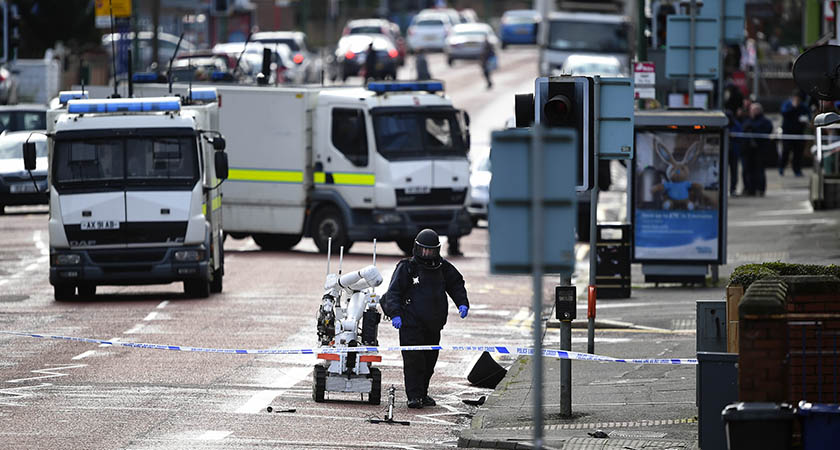 “We’re also working hard to be culturally sensitive in our policing of the Easter Rising events.

"However, there are those within dissident republican groupings who want to mark the 100th anniversary in an entirely sinister way.”

He added that there would be an increased security presence in the North of Ireland in coming weeks.

Mr McGuinness said that the car bomb attack on the prison officer is a futile attempt to destabilise two decades of peace process.

“I think all of us in society need to understand that when people resort to this type of violence, that these are people who are dead set against the progress we have made over the last 20 years,” he said.

“I think everybody in society has a role to play and I would urge anybody with some information whatsoever to give that information to the police."

The Irish Government has also expressed its deep concern following the attack.

"Not only was it targeted on an individual public servant, it represented a futile attack on the entire community which is determined to achieve a peaceful and reconciled society in Northern Ireland.”