The scientists collected vital biological data from the shark before releasing her safely.

The huge female specimen, estimated to weigh 400-500lb, is the largest ever recorded in Irish waters and likely to be 25-30 years old.

Local anglers (Sid, Terry, and Peter from Counties Cork, Down and Antrim, respectively) worked together to catch the giant “porgie” and transfer it to the scientists’ vessel so the team could quickly measure it, attach two different types of satellite tag, and take samples to examine reproductive status.

Nick Payne, shark biologist and Assistant Professor in Trinity’s School of Natural Sciences, said this was a significant moment:

"It is exciting to see such huge porbeagles in Irish waters," he said. "The conservation status of porbeagles has been really concerning in this part of the world, with the European population considered critically endangered. There’s evidence that the Donegal coast may act as a globally important reproductive area for this species, with lots of very large female sharks appearing here for a short period in Spring."

Last week was the first trip in a new research collaboration between Trinity, Inland Fisheries Ireland (IFI), and local shark anglers, together with leading scientists from James Cook University (Australia), University of Miami, and US non-profit Beneath the Waves.

"This was an incredible start to an important new project, where we will work with the local shark angling community to learn as much as we can about porbeagle movements and their reproductive dynamics in Irish waters. If this is an important breeding location then we need to know about it, so we can monitor and conserve the animals as best we can when they visit our shores."

Overfishing saw severe declines in porbeagle stocks since the 1930s, and commercial fishing by EU vessels has been prohibited under EU regulations since 2010. The International Council for Exploration of the Sea considers there to be just a single stock in the Northeast Atlantic, with tagging data showing individual porbeagle sharks can migrate long distances throughout the region.

“If we are to see recovery of the European porbeagle population it is especially important to monitor reproductive areas. If Ireland is a key breeding site then we really have a global responsibility to protect porbeagles using this area,” Dr Payne said. 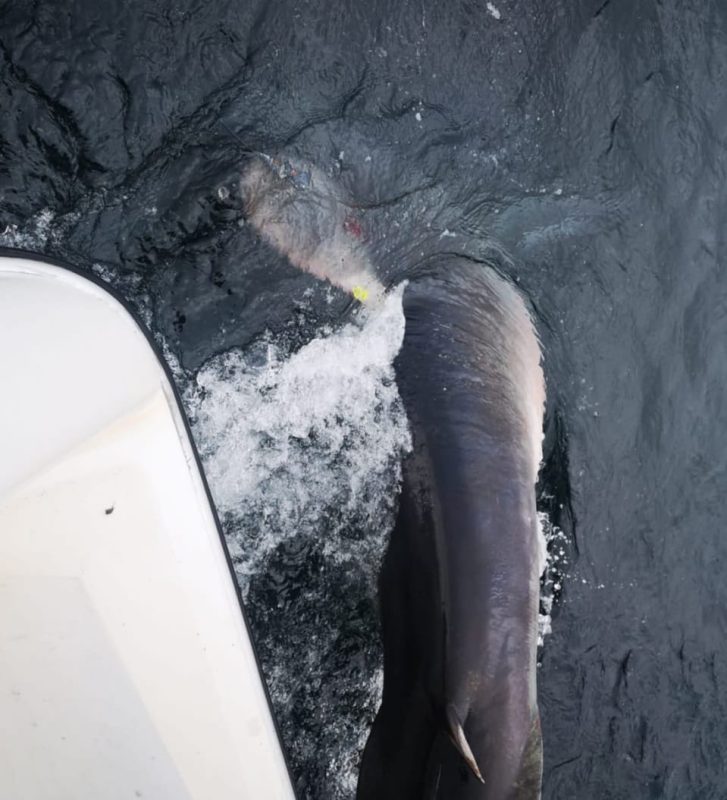 Danu is released safely back into Irish waters. Her movements in the coming months promise to better inform scientists about the ecology and behaviour of porbeagle sharks.

"Understanding the movements and migrations of porbeagles, especially large females which we are targeting for tagging, will contribute immensely to identifying potential challenges to their continued survival, as well as piecing together their seasonal patterns.

"The satellite tagging data is complemented by IFI’s long running Marine Sportfish Tagging Programme, which uses conventional tags to tag mainly elasmobranchs. The role of anglers in both these tagging initiatives highlights the importance of their contribution to targeted tagging studies and, as active marine environment observers, to ongoing monitoring of elasmobranch species generally."

The shark, which the team have nicknamed Danu, was handled and tagged safely and released in a healthy condition. One of her satellite tags will transmit a wealth of information to satellite on her migration history and ocean conditions encountered, before detaching in several months.

A second ‘SPOT’ tag provides near real-time data on her location whenever her fin breaks the water surface – a trait of porbeagles.

Dr Payne said that Danu had already covered a lot of ground and was almost at the Hebrides in Scotland 48 hours after her release. A second large female porbeagle (around 2.4 m in length, nicknamed Sorcha) was also tagged and released, but she was spending more time cruising around the same region in which she was captured.

The research team plans to tag more porbeagles in the near future. Analysis of the blood samples collected last week will begin almost immediately.

To learn more about shark research at Trinity visit www.thepaynelab.com

Donegal bar charging €2 for every mention of the word 'Covid'