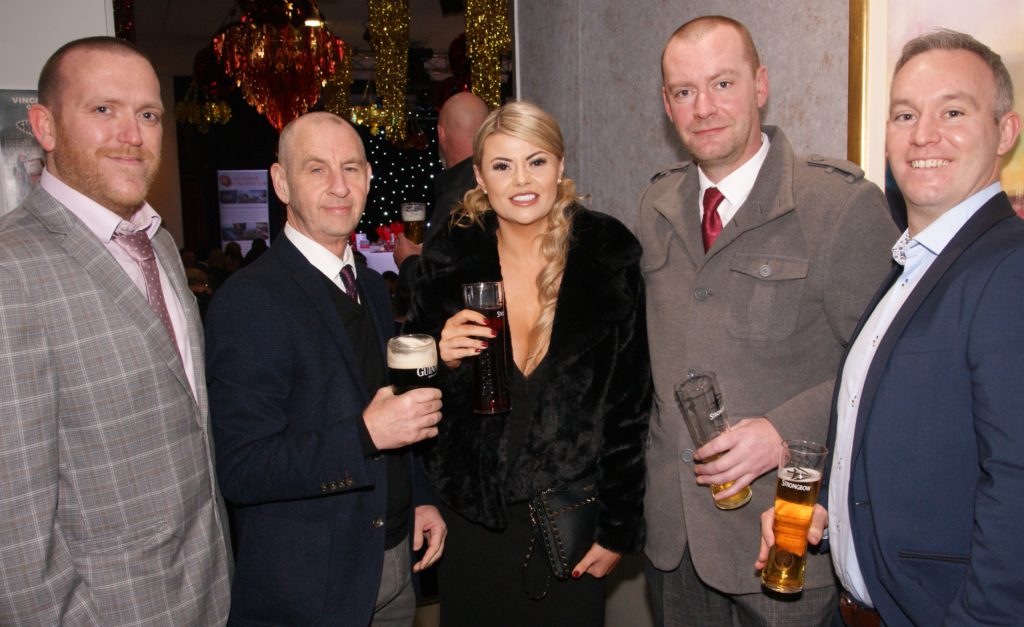 The team from Keyline Polypipe enjoying the annual event

Now in its 22nd year, the event has raised nearly £3million in total, every penny of which goes to charities and good causes across the county.

This year, they have supported Mr Burrow, the ex-Leeds Rhinos Rugby League player who was diagnosed with Motor Neurone Disease two years ago. 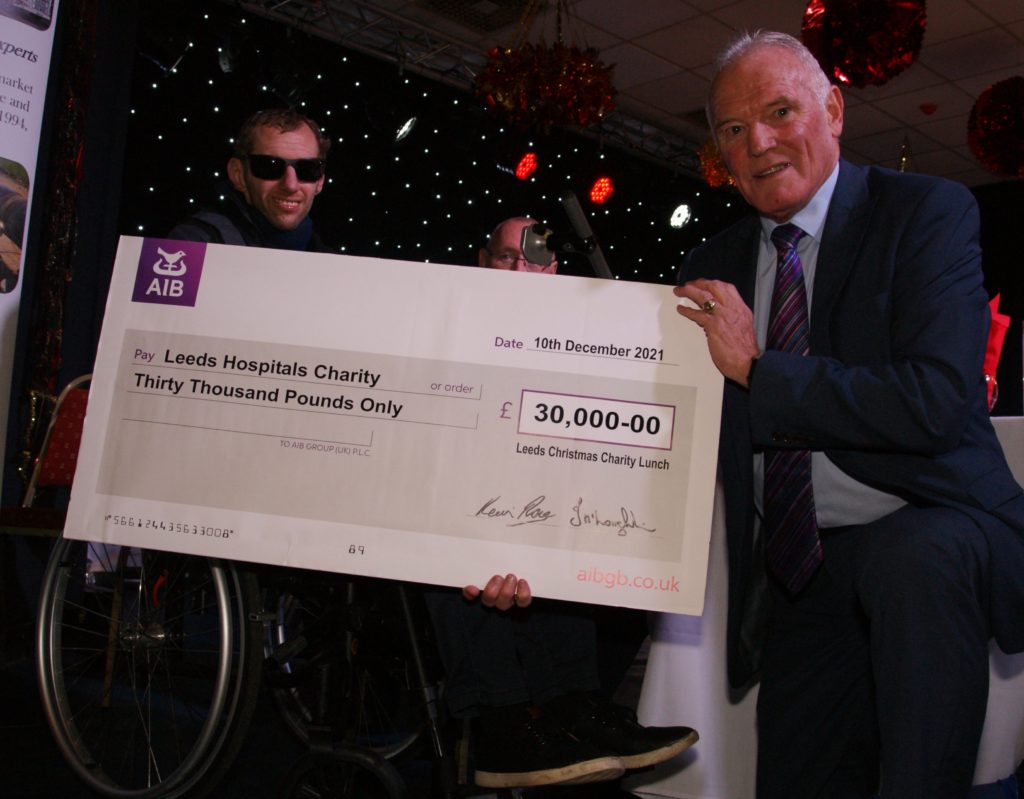 Since then, the former England and Great Britain player has campaigned to raise awareness of the incurable condition that attacks the nervous system and brain.

Earlier this year the married dad-of-three launched a £5million fundraising campaign to build The Rob Burrow Centre for Motor Neurone Disease at the city's Seacroft Hospital. 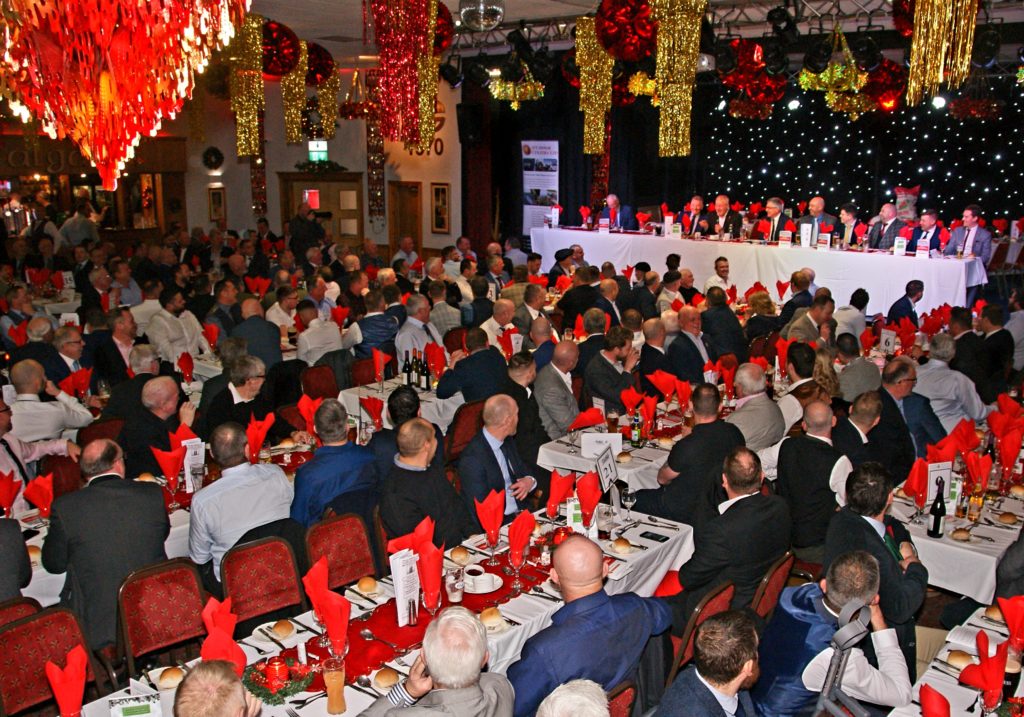 Pontefract-born Mr Burrow, 39, and his family were surprise guests at Friday's lunch at which former Leeds United winger Eddie Gray, 73, presented him with the donation.

Cheers, applause, and a few tears were shed as Mr Burrow made his entrance on the stage accompanied by his parents, Irene and Geoff.

The business community donated an initial £30,000 then a further £13,500 was raised from three prizes and, as the day had been so successful, the centre donated a further £20,000 to Mr Burrow's charity. 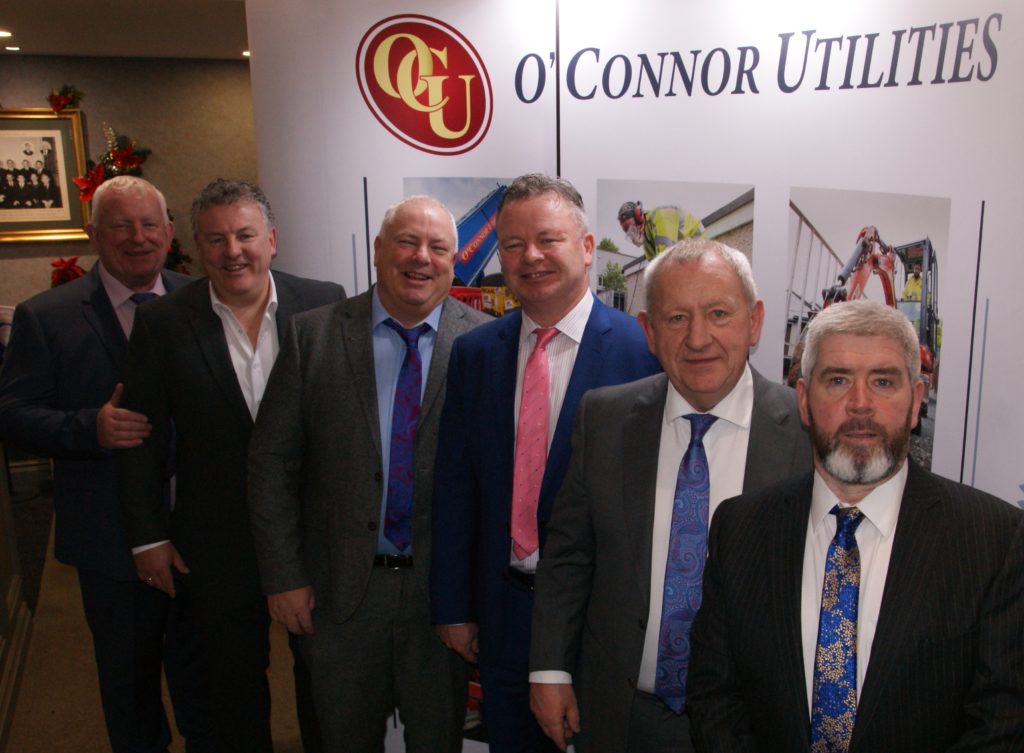 Tim Ó Connor (2nd from right) Chairman of the O'Connor Group of companies, who were the main sponsors of the Leeds Gentleman's Sporting Lunch with his senior management team (PICS: Pete Fawcett)

A team-signed rugby ball from the 1999 Leeds match against London Broncos at Wembley's Challenge Cup final went for £5,500 on the day.

A meal for eight people with Mr Burrow's ex-team mates Kevin Sinfield and Jamie Jones-Buchanan at the Leeds Dakota Hotel went for £8,000 and a meal at Akbar's Restaurant went for £1,000.

Accepting the cheque, Mr Burrow said he was overwhelmed by the centre's and business people's lunch donation. 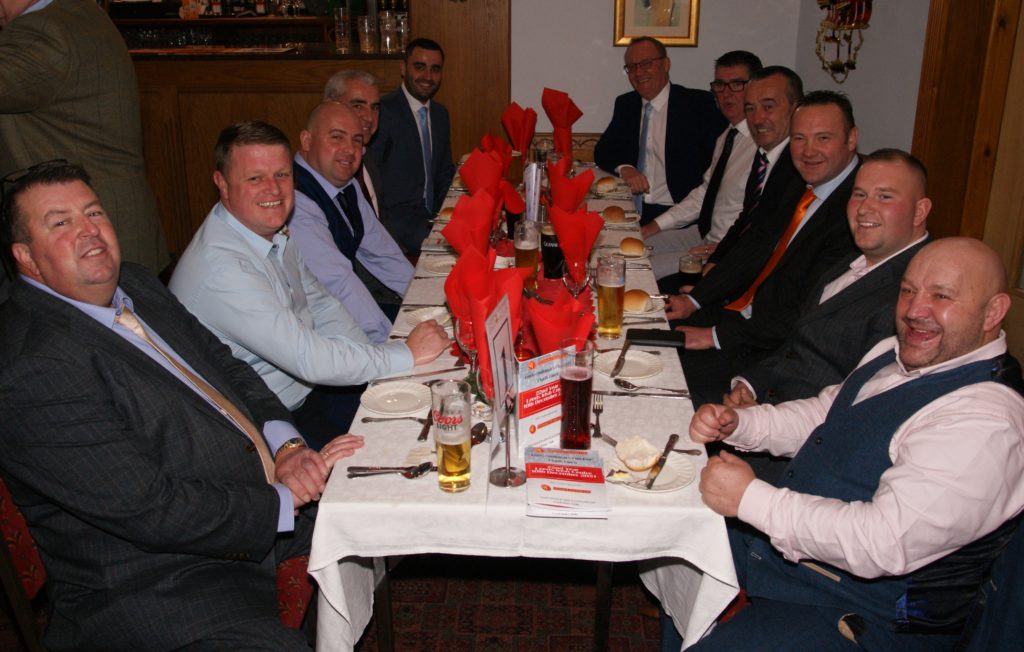 Enjoying the event, which took place at the Leeds Irish Centre

“I am so grateful for the money raised. It's extra special because it is in Leeds, near where my dad grew up, and its the city I played for.

“The Irish Centre is an iconic venue, it has always been. Bit like Leeds Rhinos,” he added.

“My parents and I were so moved by the donations. We can't thank you enough. Onwards and upwards for us all. 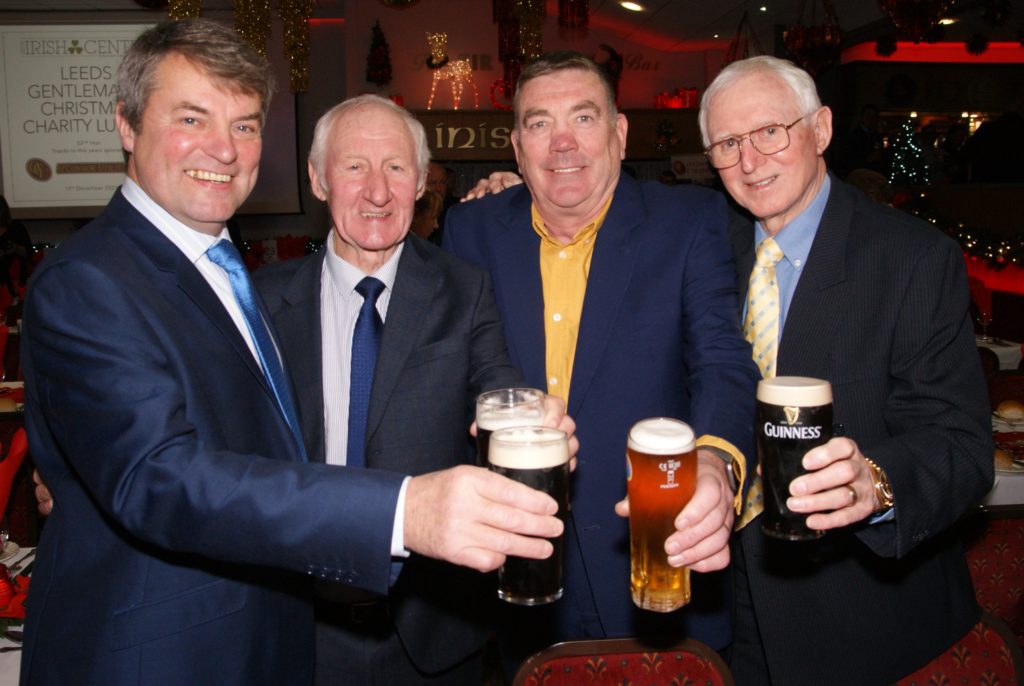 His devoted dad Geoff said: `We had no idea we were getting any donation. To get this amount is just fabulous. I was born up the road in Gipton so it is lovely to see my community helping our boy.”

Irish Centre Manager Tommy McLoughlin MBE said: “It was a highly emotional and poignant moment for Rob to be given this donation from the city's business community.

“We like to support our own and Rob was loyal in his stellar career to Leeds Rhinos.”

He added: “Many people who visit our centre will gain from Rob's amazing efforts when the new MND centre opens.

“His sporting skills gave many people much pride and pleasure over the years and now it's our turn to say thank you to him and help Rob and other MND sufferers." 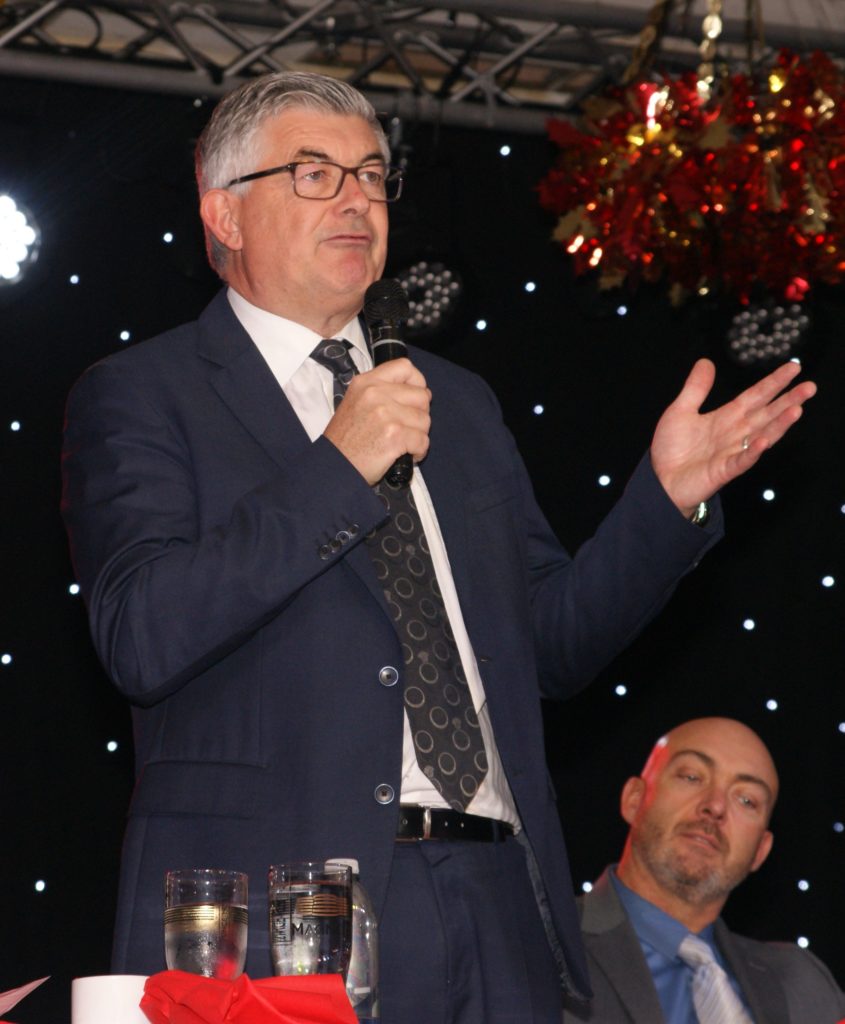 Eddie Gray praised Mr Burrow, who he deemed a star on the pitch and a hero off it, for his efforts.

“Our famed Leeds United boss Don Revie had MND and I saw how it robbed him of his life,” he said.

“I am privileged to hand over the donation from the ever-generous Irish Centre and its members.

“To do what Rob is doing now shows what an amazing person he - he is a great ambassador for the sport, Leeds and for all those who have MND and their families.”

The Irish Centre, which celebrated its 50th anniversary last year, hosts the annual Christmas lunch, whch is organised by a group of local Irish businessmen, every December.

Six people are diagnosed with MND every day in Britain.

The incurable, life-shortening condition affects the nerves in the brain and spine.

The Rob Burrow Centre for MND is set to become a flagship centre for both treatment of patients with MND and also research into the condition and possible cures.

The current centre for MND care in Leeds is based at Seacroft Hospital and was originally built in the early 20th century with care for infectious diseases in mind.

However, the building is showing its age and while technology relating to the care needs of people with MND have moved on, the environment remains the same.