SINN FÉIN Senator Niall Ó Donnghaile has called on the Football Association of Ireland (FAI) to pull out of an Under-21 Euro Qualifier with Israel.

With two games remaining, Ireland can still mathematically top their group and qualify for next year’s UEFA European Under-21 Championship in Italy.

Ó Donnaghaile though believes the FAI should pull out of next month's fixture to highlight the ‘disgraceful restrictions’ placed on the Palestine national team by Israel.

“Today I met with the FAI and asked them to reconsider the planned Under-21 Euro Qualifier which is set to take place in Israel on Thursday, October 11,” said Ó Donnghaile.

“Israel is an apartheid state which is involved in the slaughter of Palestinian civilians, flagrant human rights abuses while showing complete disregard for international law.

.@NiallSF & .@EnnisSinead met with the Football Association of Ireland and called on them to pull out of the upcoming U21 Euro Qualifier which is set to take place in Israel on Thursday 11 October. #NoToSportwashing #BoycottIsrael pic.twitter.com/IQBORwT7ax

“Palestinian footballers and facilities have been deliberately targeted by Israeli military and the national team blocked from partaking in international fixtures due to disgraceful restrictions placed on them by the Israelis.”

The senator’s request follows the party’s calls for Northern Ireland to cancel last week’s friendly with Israel in Belfast, which ultimately went ahead.

“UEFA have a responsibility not to put countries in the position of facing Israel in competitive fixtures by expelling them from their competitions while Israel continues its onslaught against the Palestinian people,” said Ó Donnghaile.

While Ireland can still mathematically top the group, their other remaining game is against Group 5 leaders Germany, who won 6-0 in the reverse fixture in Dublin.

However a win over already eliminated Israel in Acre next month would strengthen Ireland's bid for second spot and a place in the play-offs. 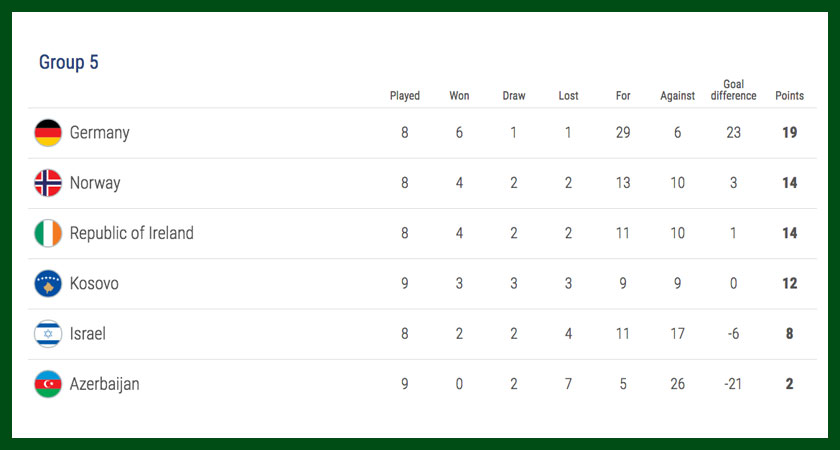 Ireland can still finish top of the group or in second place to secure a play-off spot (Image: Uefa.com)