THE LATE Sir Terry Wogan and 10 other notable Irish people abroad have been honoured at the Presidential Distinguished Service Awards.

President Michael D Higgins said that Sr. Mary Sweeney offered “hope, faith and empowerment” through her work as a missionary in Sierra Leone.

The President also praised Sir Terry Wogan’s “charm, wit, sensitivity and empathy” along with his contribution to the Irish community in Britain.

"I know you will all join with me in celebrating Terry’s gift: so many people have felt less lonely – indeed they have felt understood – as they listened to Terry on the BBC throughout the different stages of his life and theirs,” he said.

"Terry did his broadcasting with such charm, wit, sensitivity and empathy – including during some very challenging times for the Irish community in Britain. 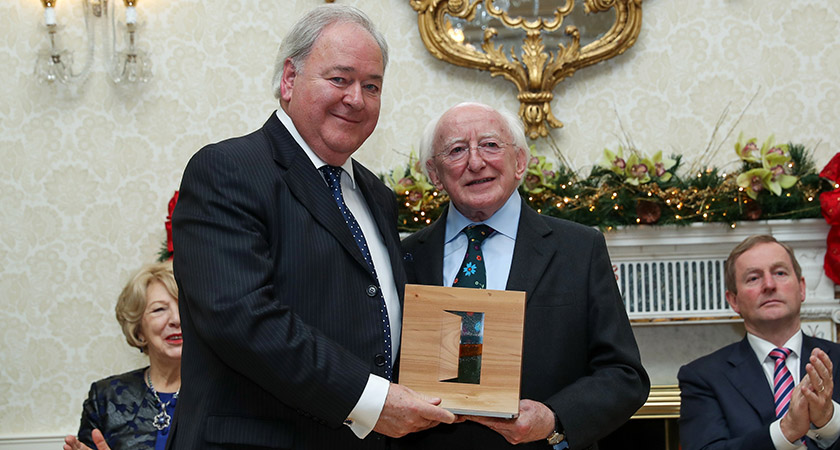 Brian Wogan collects his late brother's award from President Michael D. Higgins [Picture: Maxwell Photography]
“Terry Wogan was loved on both sides of the Irish Sea and we send his family our heartfelt condolences as today we honour him with our highest award."

Minister for Foreign Affairs Charlie Flanagan said that Sir Terry “reflected all that is good about Ireland and the Irish community in Britain.”

Sir Terry passed away in January after more than five decades in broadcasting, which saw him become the most listened-to radio host in Europe and a national treasure.

The event, which was held at Áras an Uachtaráin in Dublin, was attended by Sir Terry’s brother Brian who collected the award on behalf of his late brother.

President Higgins used the ceremony for Irish people abroad to raise the plight of those currently engaged in migration and distress. 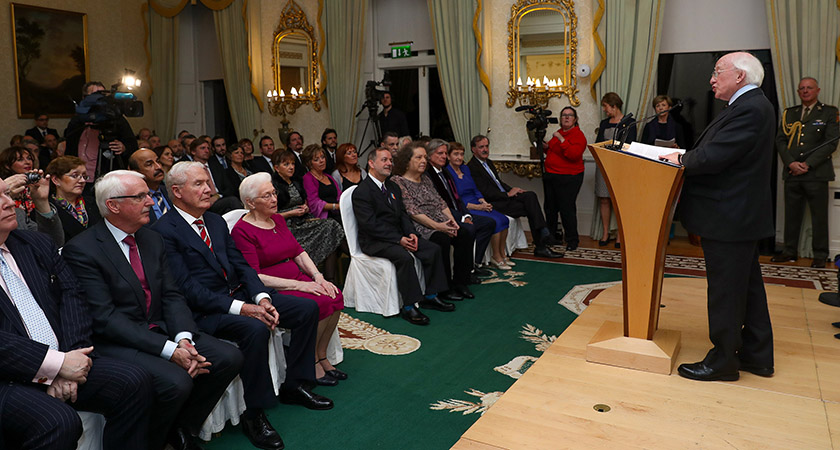 President Higgins addresses those gathered at Áras an Uachtaráin [Picture: Maxwell Photography]
He said that Irish people must be a “clear voice” in the defence of human rights.

He added: "Speaking out for those who are struggling and seeking to carve out a safe and dignified place for themselves in the world is that for which many of our awardees this evening are recognised.”

Mr Flanagan was keen to highlight the unique contributions of the Irish abroad to their respective communities.

“I am delighted that once again we have the opportunity to recognise the significant contributions of these members of our diaspora to Ireland, the Irish community abroad and Ireland’s reputation,” he said.

“In today’s ever changing world, this remarkable group of individuals have been constant in demonstrating the best values of Ireland."

Taoiseach Enda Kenny was also in attendance to pay tribute to the contribution of the diaspora to the reputation of Ireland.