TAOISEACH Enda Kenny has again defended his decision to take part in this weekend’s St Patrick’s Day Parade in New York stating that the event is “about our Irishness, not about sexuality”.

The Taoiseach came under fire in the Dáil last month for agreeing to participate in the famous US procession, which has been heavily criticised for its ban on posters promoting LGBT rights.

Minister for Social Protection Joan Burton will also be in New York but is expected to turn down her invitation to attend the parade over its ban on posters and banners promoting gay rights or causes.

But speaking in London last night after a meeting with Prime Minister David Cameron, Mr Kenny insisted that he believed the event was not an LGBT issue.

He said: “I have made the point that this is about our Irishness, not about sexuality. You make your point by turning up not by walking away.

“Half a million people march in the St Patrick's Day in New York. I do not know the sexuality of the people who are there. That is a matter for themselves. This is about an expression of our Irishness.”

The Taoiseach hit back at any suggestion that he was effectively endorsing the parade by attending, saying: “Well I am also, as the head of Government, committed to holding a referendum on gay marriage next year, and I have said publicly that I will campaign for that.” 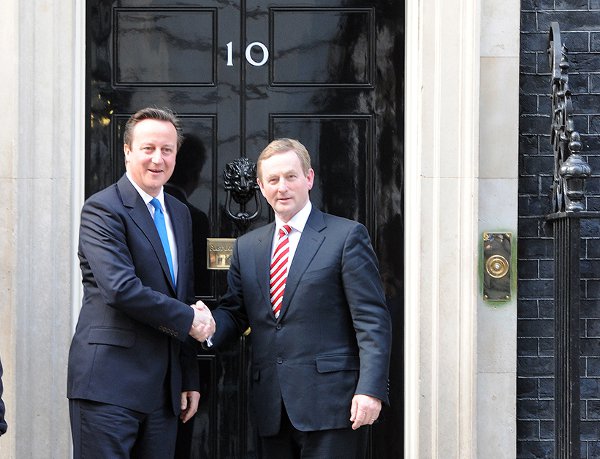 At his meeting with David Cameron in Downing Street, Mr Kenny said that he believed Anglo-Irish relations are at an "all time high”, telling the Prime Minister that the Queen's historic visit to Ireland in 2011 had made an "extraordinary" impact on the dealings between the two nations.

Mr Cameron added: "I think relations between our countries are very, very strong but I still think there is even more we can do to strengthen our ties and strengthen our relationship."

He added: "The economic ties between Britain and Ireland are strong and getting stronger. Both our economies are returning to growth and strengthening. I think there is a real opportunity to grow from that.

"In terms of trade, we have realised that one of the goals of the last summit we had when we talked about a joint trade mission between Britain, Northern Ireland and the Republic and we achieved that in Singapore, which I welcome."