EARLIER this week, news broke of a vegan woman taking her neighbours to court because they were using their barbecue and the smells were causing her "undue offence".

Cilla Carden, from Perth in Australia had claimed that she couldn't enjoy her garden anymore because the smell of cooked meat was wafting in from over the fence, and took her case to the Australian Supreme Court.

Not satisfied with simply seeking legal action - which was ultimately rejected by a tribunal  - Ms Carden appeared on local television to air her grievances with her neighbours, who she claims have had a "devastating" influence on her life.

As expected, there's been something of an online backlash against this litigating vegan, and now a massive barbecue outside her home has been planned in retaliation.

On Facebook, a page titled 'Community BBQ for Cilla Carden' has been created, urging people to come and have a cookout right on her doorstep to keep the "good old Aussie tradition" of barbecuing alive. 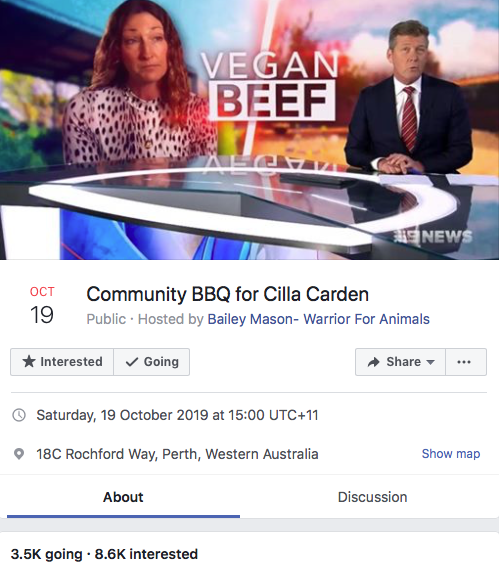 Already, 3,500 people have said they will be attending the event, while almost 9,000 others have declared an in going.

"Cilla Carden has a problem with her neighbours cooking meat on their BBQ, becuase she’s a vegan. Recently taking them to the Supreme Court!" Reads the event description.

"Don’t let Cilla destroy a good old Aussie tradition, join us for a community BBQ, and help Cilla Carden GET SOME PORK ON HER FORK.

The mass barbecue is scheduled for Saturday, October 19, and allegedly, Carden has been in touch with her lawyers regarding the event.