Flight staffers place candles in front of a memorial for the victims of the Ukraine International Airlines Boeing 737-800 crash in the Iranian capital Tehran, at the Boryspil airport outside Kiev on January 8, 2020. - A Ukrainian airliner crashed shortly after take-off from Tehran Wednesday killing all 176 people on board, in a disaster striking a region rattled by heightened military tensions. (Photo by Sergei SUPINSKY / AFP) (Photo by SERGEI SUPINSKY/AFP via Getty Images)

A HEARTBREAKING story has emerged of a man who, after a ticket mix-up, was left in Tehran airport while his wife boarded the Ukraine International Airlines flight that crashed soon after take-off.

All 176 people on board Ukraine International Airlines flight PS752 died, including 82 Iranians, 63 Canadians and 11 Ukrainians as well as nationals from Sweden, the UK, Afghanistan and Germany.

Mohsen Ahmadipour was supposed to be among that number but was unable to board the flight after it emerged his ticket had been accidentally cancelled.

According to the Ottawa Citizen, the 38-year-old, who lives in the Canadian city, had been visiting family in Iran with his wife, Roja Azadian.

Despite being separated prior to boarding the couple had arranged to meet once he found another plane to take him home.

Mohsen was still in the airport terminal when he discovered that the flight, which was bound for Kiev, had crashed just minutes after take-off.

His wife of nearly six years was among those who died.

A newlywed couple were also among those to die in the flight.

Pouneh Gorji (25) and Arash Pourzarabi (26) were on their way back back from their own wedding in Iran.

They boarded the doomed flight along with four other members of their wedding party. 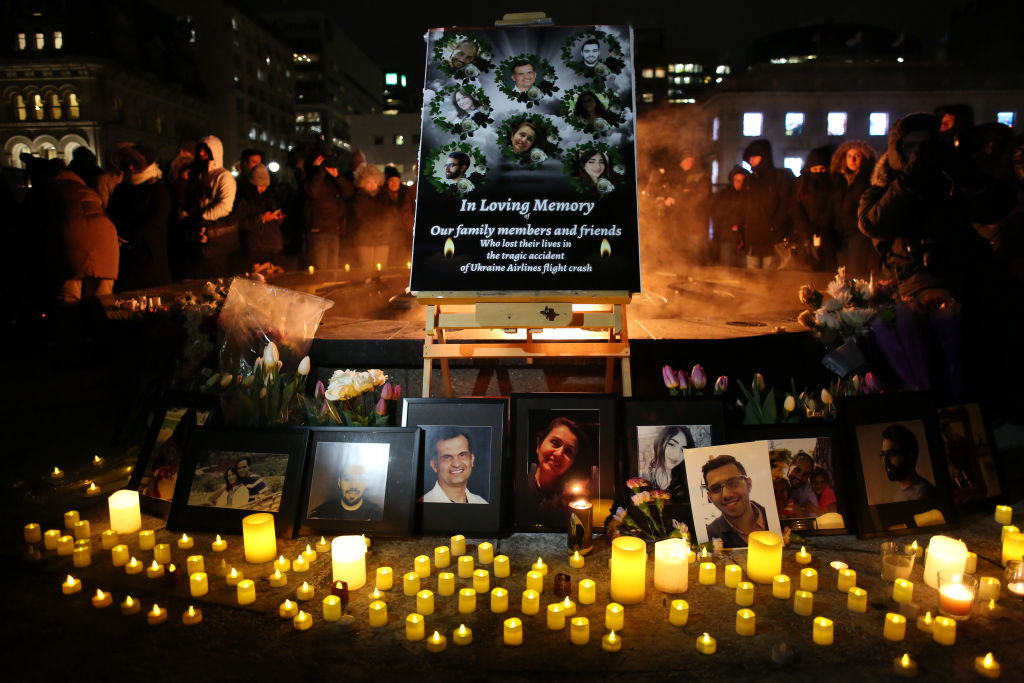 OTTAWA, ON - JANUARY 09: An altar with photographs of the victims who were killed in a plane crash in Iran is seen as people gather around to held a vigil in their memories on January 09, 2020 in Ottawa, Canada. (Photo by Dave Chan/Getty Images)

They had been due to take an earlier flight but had remained in Iran to pick up wedding photographs.

Western leaders believe that the evidence suggests the plane was hit by a surface-to-air missile, possibly in error.

However, Iran has rejected such suggestions with the country’s civil aviation chief stating that he was "certain" that the plane was not hit by a missile.