Tributes have been paid to a teenager who died after the car he was travelling in hit a ditch in Co Wicklow earlier this week.

Stephen O'Byrne, 19, from Aughrim, was a passenger in the car when the incident occurred on Monday night.

The 18 year-old driver of the vehicle was also injured in the single vehicle crash on Vale Road, on the outskirts of Arklow, but his injuries aren’t life threatening.

Stephen’s funeral mass will take place at 11am at the Sacred Heart Church in Aughrim tomorrow.

He was a talented GAA player and represented the Aughrim GAA club, following in the footsteps of his father. Stephen was also the nephew of former Wicklow county footballer and Aussie rules player Pat O’Byrne. 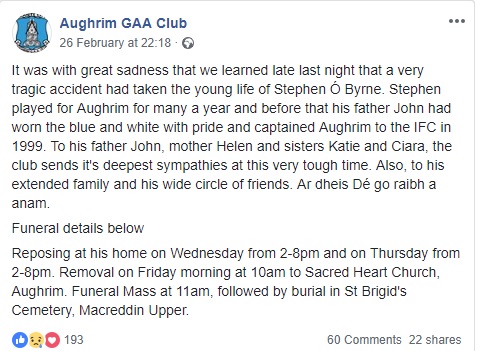 Another added: “RIP, condolences to his family and friends. Far too young to go but heaven has gained another angel. Fly high young man."

Stephen was a keen golfer and car enthusiast and friends have planned to mark his funeral with a gathering of cars on the day.

The Facebook page Right Side Society said: "Stephen was mad into his cars he will be very sadly missed by everyone in Aughrim, Arklow, surrounding areas and the car community.

"Stephen’s close friend Dylan wants to ensure that Stephen has the send that he would love and that he deserves by having a convoy/gathering of cars at his funeral."

Gardai in Wicklow are still appealing for witnesses to the accident to come forward with any information they might have. Contact Arklow Garda Station on 040226320, or the Garda Confidential Telephone Line 1800 666 111.