'We will not tolerate an economic united Ireland': Loyalist warning to Leo Varadkar & Boris Johnson

NORTHERN IRISH LOYALISTS have warned both Taoiseach Leo Varadakar and Prime Minister Boris Johnson that they "will not tolerate an economic united Ireland" amid tense Brexit negotiations.

Both leaders have been further warned that the current Brexit proposals would be "entering very dangerous territory."

The warnings came after a host of loyalists gathered for a meeting at the Constitutional Club in east Belfast.

A pamphlet advertising the meeting described the Prime Minister's deal as a "betrayal act." 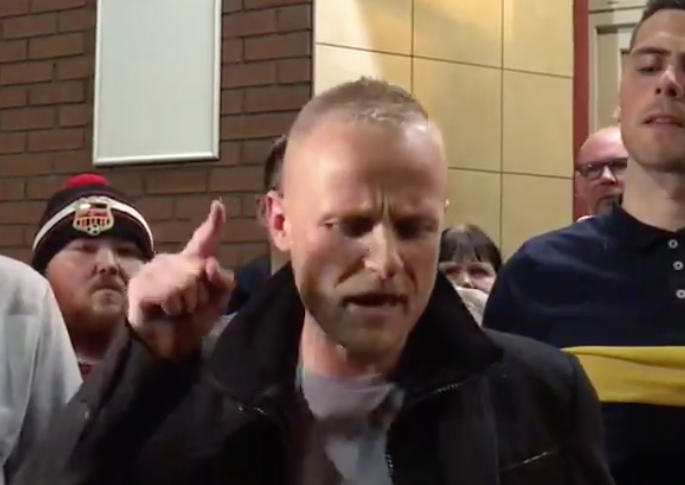 Jamie Bryson speaking to the media following a meeting at the Constitutional Club in east Belfast on Monday.

Loyalist spokesman Jamie Bryson spoke of the "immense anger" among loyalists around the current proposed Brexit deal, and together with the DUP, he criticised the notion of an economic border down the Irish Sea.

They've also openly opposed the idea that The Assembly would be given a say on whether to continuing following EU custom rules, and that the DUP would not be given the chance to veto any such decision.

Nothing agreed between Boris Johnson and the EU will be passed into law until they're agreed upon by both Westminster and the European Parliament however.

Speaking to media after the meeting, Mr Bryson said: "The unionist and loyalist community have had enough of this one-sided peace process, we're not going to tolerate an economic united Ireland and that was the feeling in the room.

"The anger is immense across unionism and loyalism, I can't think of a section of unionism or loyalism who was not represented here tonight in east Belfast so when you ask what was the outcome, no one group was behind this, it's not one group to come up with an outcome, this was the people speaking, this was the unionist and loyalist people speaking.

"They can take that message back to Boris Johnson. For three years Leo Varadkar and the Irish Government went to the European Parliament and everywhere else and said we can't have a border on the island of Ireland because it's a threat to peace, but it's OK we'll just shaft the loyalists and put a border in the Irish sea.

"I think they are entering very dangerous territory at this point in time."

Conservative MPs need to look deep within their own conscience. If you vote for this Betrayal Act then you are trampling on the memory of all your colleagues that died for standing firm against the IRA. You will be giving republicans what they always wanted. Think about it. pic.twitter.com/7fTWDJQVUp

When asked if the meeting was "stoking up violence", Bryson responded by saying: "No one is trying to stoke up violence, but let me say this, it is good enough for the IRA, it's good enough for nationalism including the Irish Government to win concessions and drive us into an economic united Ireland.

"No sensible person wants to see violence, loyalism has spent three years reaffirming a commitment to peace, but ultimately loyalism's support for the peace process and the Belfast Agreement was predicated upon one very simple thing, the union is safe and the threat of violence has been used to undermine the union and drive us into an economic united Ireland and people can read into that whatever way they want."