LAURA Plummer was making a routine trip to Egypt to see her husband when she was stopped at customs in an Egyptian airport.

The 33-year-old woman was visiting her husband Omar Plummer for two weeks when painkillers Tramadol and Naproxen were found on her person, which were reportedly brought over for her husband's sore back.

According to The Mirror, the British woman was confused in the airport by the arrest and signed a 38-page statement in Arabic. At the time of signing, she thought was a release form which would guarantee her leaving the airport however the holidaymaker was detained.

Laura Plummer has been held in a 15ftx15ft cell along with 25 other female prisoners for more than a month, with no sign of release imminent. 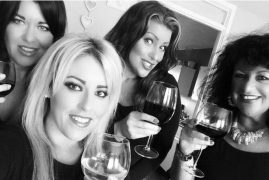 Laura, (left) with her sisters and mum

Authorities in Egypt have accused Plummer of trafficking drugs, however, the amount of medication that was in Laura's possession at the time is believed to have been £21.23.

Roberta Sinclair, Laura's mother has said her daughter Laura had "no idea" that bringing the painkillers over would result in such serious consequences... "The painkillers were placed at the top of her suitcase, she wasn’t hiding them... We’ve been told she’s facing either 25 years in prison or the death penalty."

Laura's brother James also spoke out about how badly his sister had been treated, explaining how she  had no previous convictions...  "She's so by the book, so routine, she just likes her own home comforts, watches Emmerdale every night or things like that, going to bed at nine o'clock every night."

James said the conditions of the cell was having a serious effect on his sister, with her hair falling out due to stress..."I don't think she's tough enough to survive it... She has a phobia of using anybody else's toilet, so let alone sharing a toilet and a floor with everybody else. That will be awful for her, it'll be traumatising."