A WOMAN who went into hospital for what she thought was kidney stones was in for a surprise with the news that she was actually in labour… with triplets.

Dannette Giltz, who lives in South Dakota, began experiencing strong pains in her back and side while at home.

The type of pain felt familiar to her, and she came to the conclusion that she was suffering from kidney stones, having experienced that before.

But the mother-of-two had no idea that the familiar pain was actually labour—she was 34 weeks pregnant with triplets.

When the pain became unbearable she took herself to hospital, resigning herself to the fact that she would need surgery to break up the stones.

But a urine sample and subsequent ultrasound showed she was pregnant—and with only two babies visible on the monitor the doctor incorrectly told Ms Giltz and her husband Austin that she was having twins.

With Ms Giltz already 4cm dilated, and one of the babies positioned feet first, the South Dakota woman was whisked in for an emergency C-Section.

Ms Giltz had had no symptoms whatsoever throughout her pregnancy—no morning sickness, no movement, none of the usual tell-tale signs, meaning the couple were completely unprepared.

Her husband, still in shock from the news, was hastily trying to think of two names for the new additions to the family when the couple got yet another shock: the doctor shouted for another blanket as there was in fact a third baby on its way. 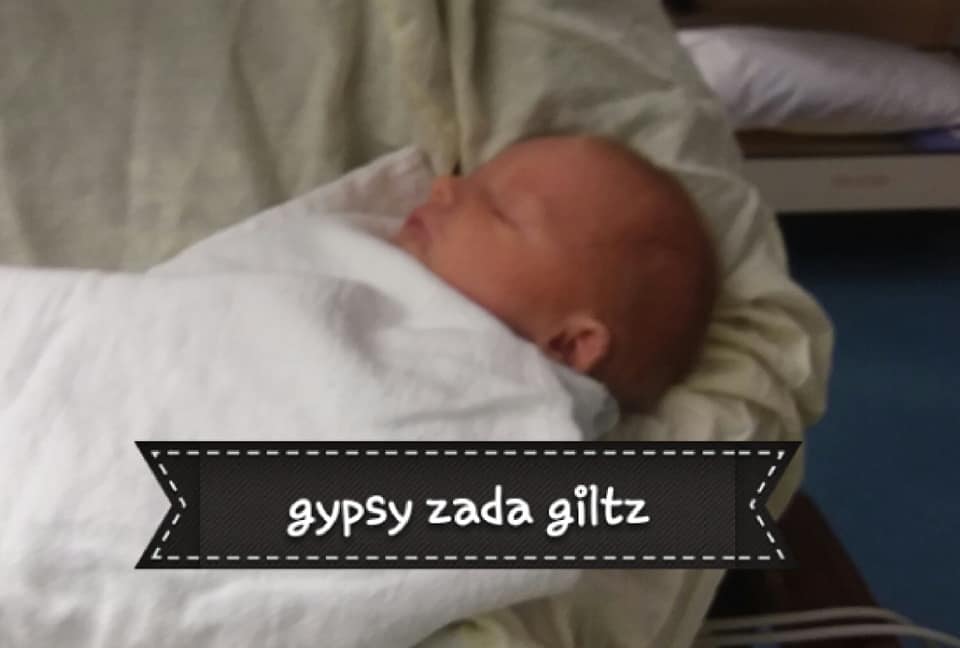 Ms Giltz broke the news to friends and family on Facebook with photographs of the three newborns and a short yet apt caption: “Well this was a huge shock.”

The two girls and a boy, Nikki Marie, Gypsy Zada and Blaze Jackson, were born weighing 4lbs each, are doing well—no longer being tube-fed, the parents will soon be able to bring them home and begin their lives with the new additions. 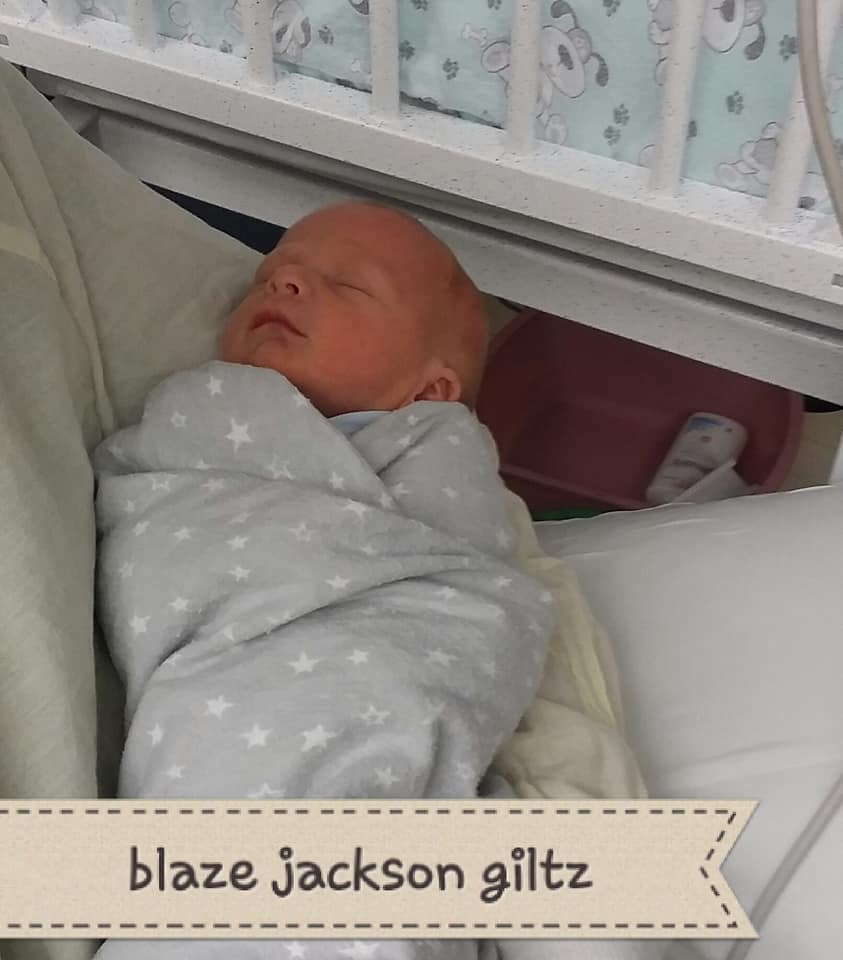 A friend of the family set up a fundraiser to help Mr & Mrs Giltz to cope with the unexpected financial pressures that comes with three newborns, and Ms Giltz gave a rundown of her experience leading to the births. 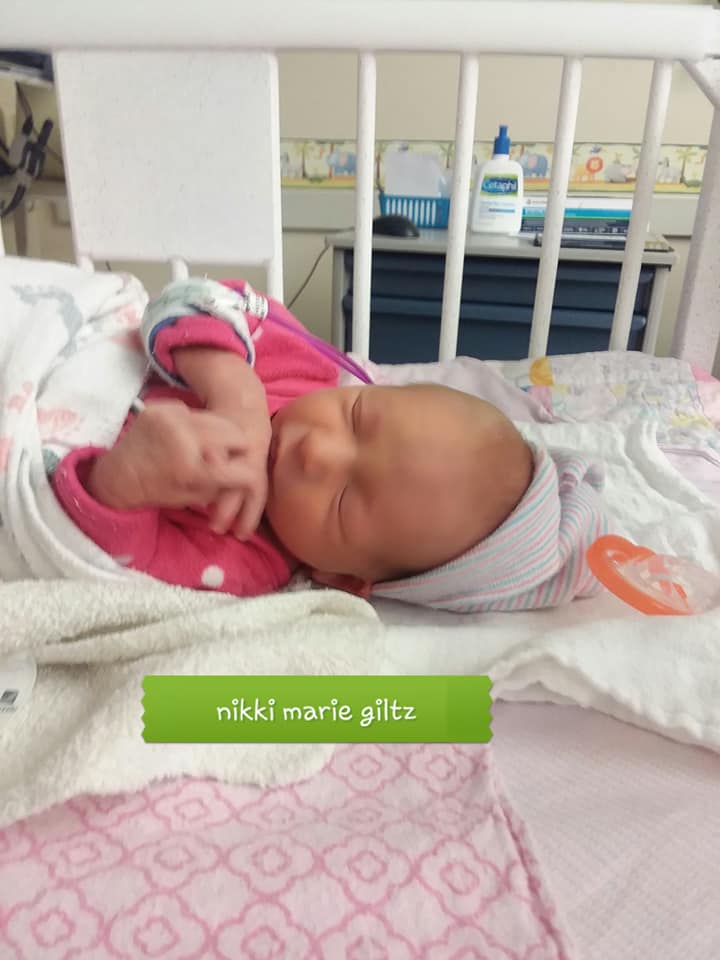 The post, which is edited here for clarity, reads:

“I started getting pains in my back and in my side. It felt like kidney stones because I’ve had them once before, so I just kept pushing until on Saturday when I was in so much pain all I could do was lay in bed and cry.

It hurt to move and even breathe. So I went to urgent care thinking I would need to have surgery to break the stones up. Well the Doctor came back in after doing a urine sample and said “You’re pregnant!” So they got the portable heart monitor that they use and did an ultrasound and said there was possible twins.

After about two hours they confirmed twins as there were two heartbeats. They noticed that the pains I was feeling was actually contractions, so the Doctor checked and I was 4 centimetres dilated. I had to be rushed by ambulance to Rapid City hospital.

They did an ultrasound and saw one baby was feet first so I would need a C-Section. When the Doctor checked I was already 6cm dilated so they moved very quickly and got me into surgery.

Then the Doctor yelled “I need another blanket, there’s a third!” I ended up having triplets, one boy and two girls.

That’s the story—I never felt movement, I never got morning sickness, nothing.”

The Giltz’s ten-year-old son Ronnie told local South Dakota news Channel KOTA-TV that he had wished on a shooting star for a little brother, and for baby sisters for his own younger sister, and that he “knew this day was always going to come”.

His parents could probably have done with a warning!

If you would like to donate to the Giltz’s fundraiser, you can do so here.

Revealed: USA ranked as having 5th worst coronavirus pandemic response in the world