THE DAUGHTER of Captain Sir Tom Moore paid tribute to her late father at his funeral today, telling him: "Daddy, you may be gone but your spirit lives on".

A man who emerged as a beacon of hope for so many during the darkest days of the coronavirus pandemic, Captain Tom was laid to rest this afternoon at Bedford Crematorium.

Covid-19 restrictions meant just eight close relatives were able to attend the service but Sir Tom still received a hero’s send-off that included a guard of honour and a breathtaking RAF fly-past.

Six soldiers from the World War II veteran’s regiment carried his coffin into the service.

It was a ceremony Captain Tom had been able to plan himself before he died.

His coffin was brought in draped in a Union Jack while My Way by Frank Sinatra, which was a personal favourite of Captain Tom’s, played at the funeral service’s conclusion

In between both of the NHS fundraising hero’s daughters paid tribute with emotional readings while his grandchildren read several poems in his hour.

A visibly emotional Lucy Teixeira spoke through tears of how her father "walked his way into the nation's hearts" at the start of the pandemic with his brave efforts and positive outlook on life.

She said: "Daddy, you would always tell us 'best foot forward', and true to your word, that's just what you did last year, raising a fortune for the NHS and walking your way into the nation's hearts."

She added: "I am so proud of you - what you have achieved, your whole life and especially in the last year.

"You may be gone but your message and your spirit lives on."

Captain Tom’s other daughter, Lucy Ingram-Moore, who he lived with over the final 12 years of his life following, also wept when talking about the loss of her father.

"The loss of you is a dull physical ache for me, but the power of love you left us with allows us to stay strong," she said.

"Our relationship cannot be broken by death.

"You will be with me always." 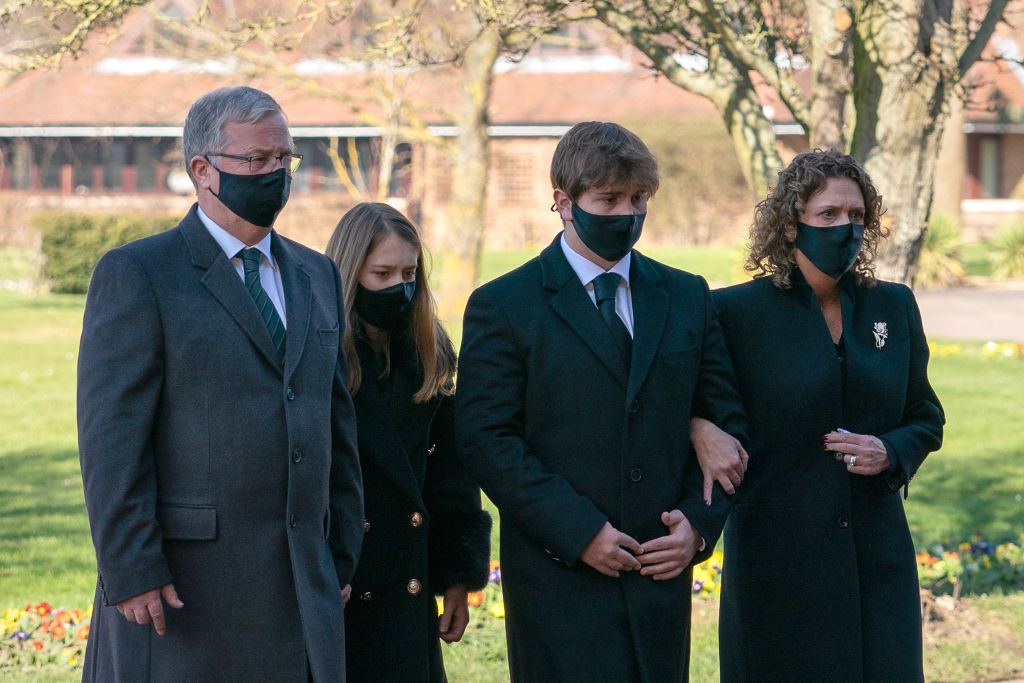 Captain Tom had first moved in with Lucy and her family following the sad death of his wife, Hannah and Lucy’s mother, in 2008.

She described the feel of watching her father become a "beacon of life and hope to the world" as simply "magical".

"We just couldn't believe it, could we, when [fundraising] reached £38.9million," she said.

"We are so proud of the way you handled everything that happened."

She also paid tribute to the "spirit of hope, positivity and resilience" her dad possessed and how the world became “enthralled” by his can-do attitude.

"They too saw your belief and kindness and fundamental goodness of human spirit," she said.

She finished with a personal tribute to the man who was such an intrinsic part of her family’s life.

"You are the fabric of our life and home - every cupboard we open, each door we go through, you are there,” she said.

"We have lost a huge part of our family. Our five now stands as four. We feel your loss with a deafening silence."

Regimental Sgt Maj Jamie Pearson led the pallbearers outside the service, while a Dakota took part in a special fly-pass organised as part of the service.

There was also a three-round gun salate in his honour, which took place while You'll Never Alone, the song Captain Tom hit the top of the UK singles charts with, played.

Church bells around the country rang at noon while a wreath was laid at Sir Tom’s birthplace in Keighley on behalf of the Queen.

Once Covid-19 restrictions permit, Sir Tom's ashes will be interred in Yorkshire, alongside those of his parents and grandparents in the Moore family plot.