Euro 2016: After Belgium battering Ireland must throw everything at Italy

WELL if this is what the Belgians are like when they’re fighting among one another, it’s scary to think how good they might be if they’re ever united.

Following a week of recrimination and denials, when their manager’s position was called into question, they brushed aside their troubles – and then brushed aside Ireland. So much then for the notion that discord reigns in their dressing room.

Certainly, it wasn’t visible in Bordeaux. But nor, for that matter, were Ireland. In a game of two halves, Martin O’Neill’s men were dreadful in the opening period and humiliated in the second. And all of a sudden the exit door is staring them in the face, unless, somehow, they find strength from adversity and defeat the Italians in Lille.

What helps is that the Italian manager, Antonio Conte, is prepared to rest as many as nine starters from his team, knowing they have already booked their spot in the second round as Group E winners. Perhaps Martin O’Neill should adopt the same policy, especially when you consider that James McCarthy doesn’t look fit, Glenn Whelan and Shane Long have ran themselves into the ground and Ciaran Clark’s psychological scars from a horrible year at Aston Villa have yet to heal.

So change is needed – in attitude as well as personnel. If the narrative from Saturday’s game focused on parking the bus and hoping to survive, then Wednesday requires a different theme, a point Martin O’Neill was quick to make in the aftermath of the 3-0 defeat. “We have to throw everything at Italy,” he said. “We have to be positive. We created a lot of chances against Sweden and had we taken a couple of those, then we would be sitting here with three points on the board and with a much stronger chance of qualifying. 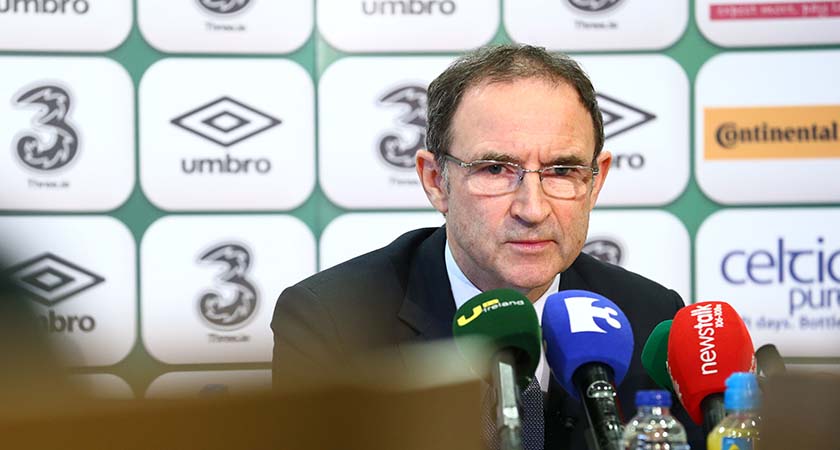 Martin O'Neill is keen to look ahead to Italy [Picture: ©INPHO/Cathal Noonan]
"But the truth is we were beaten by a better team on Saturday afternoon and we just have to take our medicine and move on. Are we capable of beating Italy? Absolutely. We might only have to take one chance. That might be enough for us.”

Whatever about one chance, it’s clear this is Ireland’s last one. A draw or defeat will send them home and evoke memories of Euro 2012 when the band played on as the ship went down.

At this stage The Fields of Athenry is almost a requiem for Irish soccer’s hopes. Four years ago, the fans sang in the rain of Gdansk while the Spanish moved to the rhythm of Xavi and Adreas Iniesta’s passing. This time it was Eden Hazard and Kevin De Bruyne who inflicted the pain and prompted the lament. It really was so lonely around the fields of Bordeaux.

“But we move on,” said O’Neill afterwards. “We have two ways of looking at it. We can feel very sorry for ourselves or we can take some self-confidence from the way we played against Sweden. The most important thing for us is to try and put Saturday to one side, to re-appraise it and then get our heads around the fact we have to win the Italian game. That won’t feel difficult.”

How they need to feel and what they have to do are entirely different things, though, as saying you can beat Italy is altogether different to doing it. And yet the players are positive. “It is there for everybody to see what has to be done. We need a win, three points,” said Darren Randolph.

“We aren’t relying on other people. The ball is in our hands. Everyone in that dressing room has lost games before. Saturday’s game is done now. We will go back, look over the video and see what we did well and what we didn’t do well and then we go again. Look, it is not the end of the world.” 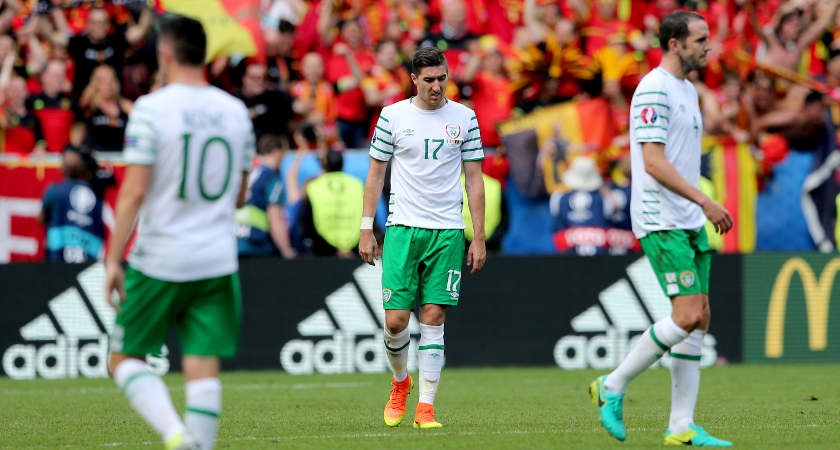 Ireland’s Stephen Ward, Robbie Keane (left) and John O'Shea (right) dejected after the game [Picture: ©INPHO/James Crombie]
Yet it felt like the end of something. Up until now, the mood had been upbeat. References to the wins over Germany and Bosnia were frequent. Mentions of Shane Long being in the form of his life; of Leicester wanting to buy Robbie Brady; of Wes Hoolahan finally getting the recognition he deserved, of O’Neill being able to pull rabbits out of hats, regularly slipped into conversation.

Strange then how a Saturday afternoon in France’s wine region can have such a sobering effect. “Look through their team,” Randolph demanded. “They are not ranked where they are (second in the FIFA rankings) for no reason. They are a good team and they proved it.”

Have Ireland become a bad one? It’d be cruel to say they have, just as it was cruel when a Swedish journalist asked Robbie Brady if the fact that Ireland’s fans were the nicest in the tournament meant the players, too, were simply too nice. “Maybe for the three goals today we were,” Brady said. “But, in general, I don’t think so.”

“Look,” he continued, “our fans have been unbelievable throughout the tournament. They are doing us proud. But we want to make sure that we do our part and make them proud too. That means going to Lille and putting in a performance. You always feel you can get a chance. We didn’t play well enough at times on Saturday. We need to improve.”

They do. Otherwise the show is over.

Euro 2016: Why Ireland have good reason to believe they can beat Belgium

Euro 2016: Everything you need to know about Republic of Ireland’s Group E opponents