LEICESTER City’s Jamie Vardy could break a longstanding record held by Irishman Jimmy Dunne, if he scores in his twelfth successive game this Saturday against Swansea.

The 28-year-old broke Ruud van Nistelrooy's Premier League record after scoring in his eleventh consecutive game, and now has his sights on defeating Dunne’s all-time record in the top tier of English football.

The Dubliner set the record in the 1931/32 season with a 12-match scoring streak for Sheffield United.

It was during his time in prison when he nurtured his footballing talent. 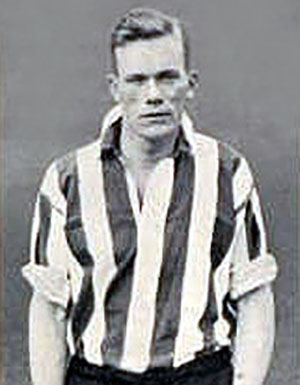 After his release, he joined Shamrock Rovers before moving to the third Division of English football to join New Brighton in 1925.

A year later, Sheffield United bought him for £800, where he went on to hold the club’s record for the most league goals in a season with 41 in 1930-31; the most ever scored by an Irishman in the top tier of English football.

He stayed at Bramall Lane until September 1933, when he joined Arsenal for over £8,000, where he played for almost three years.

After initial success, Dunne experienced a lack of first-team football, and he joined Southampton, then in Division Two, helping to save the club from relegation.

He refused a new contract in 1937 and decided to return home to end his career at his boyhood club Shamrock Rovers.

Dunne also enjoyed a colourful international career, as one of only a few to play with both the Northern Irish IFA and for the Republic’s FAI team; he scored 22 goals across both teams.

His most memorable moment from his international career came whilst captaining his country against Germany in Bremen in 1939.

When officials from Germany's Irish embassy instructed the Irish players to give the Nazi salute as a goodwill gesture to their hosts, Dunne ordered his team-mates to reject their instructions with his famous ''Remember Aughrim, Remember 1916'' speech.

Dunne’s footballing success ended prematurely when he died in 1949 aged just 44 after a heart attack.