He understandably cut a happy figure as he spoke after Saturday's Lory Meagher cup final, with All-Ireland silverware in the bag.

It wasn’t all plain sailing, but after a shaky start his charges got to grips with this encounter in the second half, and despite not scoring a goal for the first time this season, they weathered the storm well to ensure they mounted the steps of the Hogan Stand at the final whistle.

Stark contrast to hurling last Spring where Warwickshire reached the Division 3B Allianz League Final in spring, putting up a high tally, which included some well struck goals, but ultimately suffering hard break, with an extra-time loss to Longford in Carrickmore, Co. Tyrone.

Warwickshire and Joyce were determined not to end the year showing that they had lost two finals.

“I thought there was a lot of pressure having played all year, maybe 12 games-losing one, a league final,” Joyce said after Saturday’s decider at GAA Headquarters.

“Then coming to Croke Park to lose two finals would have been heartbreaking, but the pressure was on me, and probably a bit on the players as well.”

Trailing at the break, perhaps unexpectedly given Warwickshire’s record to date this year, a few stern words were said at half-time, which seemed to have worked their magic, as Warwickshire turned in a far better display on the restart.

“It wasn’t looking good at half-time, but we kept them scoreless right up to near the end, so the players really delivered in the second-half,” Joyce said.

The Tipperary native was one of just a handful of players involved in both triumphs, and he was delighted his side managed to push it over the line.

“It was a proud moment for myself to captain Warwickshire,” Kennedy told The Irish Post.

“To be given the opportunity at the start of the year was brilliant, as there is a lot of strong hurlers on the team, so it was a great honour to lead them out in Croke Park.”

Losing the league final was a key motivator in driving this success according to Kennedy.

“That day against Longford was very close, we got pipped at the post after extra-time, and I think that gave us the motivation to drive on to try and win the Lory Meagher.

“When you taste defeat you don’t want to taste it again.”

Warwickshire failed to score a goal for the first time in their current campaign, and Kennedy put this down to an impressive Leitrim defence.

“Their defence was very strong on the day, and didn’t give our forwards much time on the ball. They closed them down, I suppose we were lucky that Liam Watson kept the scoreboard ticking over to keep us in contention.

“In the second half the game opened up and we were able to create a bit of space, and boys stood up to be counted in the end.”

Trailing by two points at the break, Warwickshire knew in the dressing room at half-time that they had more in them.

“Tony came in and gave us a speech and tried to convince us to keep the faith, and to try and relax on the ball a bit.

"Chris Brough also gave us a fire and brimstone speech as well, and I think that sort of drove us on really too.” 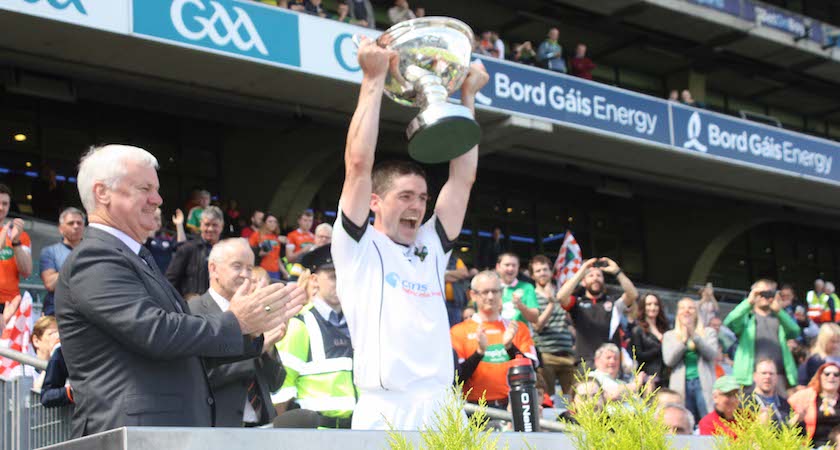 Looking at the bigger picture, with four English-born players involved, Kennedy says the win will inspire the next generation of home-grown talent.

“Thomas Kelly had a good year, there was massive competition for places for that corner-back spot with Chris and Seamus Brough also.

“It’s brilliant to see the likes of Thomas and Kieran Boxwell start, and give a great account of themselves on the biggest day of all at Croke Park.

“A win like this does boost hurling in the Warwickshire area. It definitely is a boost for hurling."

The full-time whistle saw scenes of unbridled joy, among players, management and supporters, with Joyce in particular cutting an animated figure, as he had done throughout the game, and indeed the campaign – a man who certainly lives for hurling.

And under the Hogan Stand, in the same dressing room where Warwickshire celebrated their previous Lory Meagher Cup success, the joy and excitement was also palpable afterwards.

“It was out of this world,” he said. “I wouldn’t want to see it when you get beat. It must be a sorry dressing room.

“We had words at half-time and said ‘look, we have to get the win here’ because it’s an awful day when you lose a final. So they come up trumps and it’s just fantastic.”

Warwickshire’s scoring leader throughout 2017, and the highest scorer in any competition this year Liam Watson certainly made a telling contribution.

With 11 points from frees, out of a tally of 17 points ensured it was a memorable day for the former Antrim star, who again made a winning journey to Croke Park – his first time to give an exhibition at Jones Road, since scoring 3-7 in Loughgiel Shamrocks’ AIB All-Ireland Club success in 2012.

Joyce was high in his praise of Watson.

“We had to bring Liam out to midfield to get a hold of the game and to get back in contention. Then we moved him back. They’re dogged, very dogged. It’s hard to beat them.

“He loves Croke Park, it is his playground. So he turned up on the day and thank God he did. He got us over the line really.”

The Iron Games: Looking ahead to the hurling, golf and finals in Croke Park