IN the wake of Ireland bowling out world champions England for just 85, and Shane Lowry securing victory at The Open at the expense of runner-up Tommy Fleetwood (who's English FYI), we’ve decided to spend the afternoon celebrating famous Irish victories over our Easterly neighbours.

Naturally, there’s plenty to choose from, but here’s five of our favourites:

Perhaps the narrow victory over the English in the 2001 tournament sticks out more in the memory, or maybe the 43-13 thumping in 2007 does, but we’ve chosen the win in 2015, due mainly to the strength of the two sides and just how fine the margins were in that tournament.

Going into round three, both nations were undefeated and harboured hopes of a grand slam, figuring that victory over the other would probably secure it.

The match was intense from the off, and an early penalty from Johnny Sexton set the tone. Steely defences from both sides kept tries to a minimum, and the match quickly turned into a sparring contest of sorts between Sexton and England fly-half George Ford.

Midway through the second-half, Conor Murray kicked through for Robbie Henshaw, who leapt above England’s Alex Goode to meet the ball and secure the only try of the game, and effectively take the tie beyond the English.

Despite a fourth round loss to Wales, Joe Schmidt’s Ireland held their nerve to secure one of the closest Six Nations Championships in history on points difference. 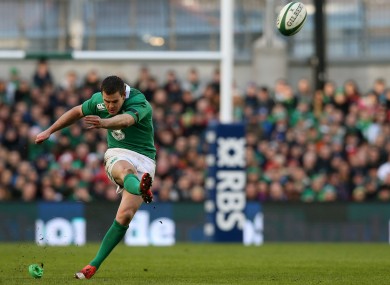 Euro ‘88 might not be as fondly remembered as Italia ‘90 which followed it, but it was the start of a six-year love affair Ireland had with football as Jack Charlton led a team which reignited the nation’s love of the sport.

It was Ireland’s first major international tournament, and their opening match couldn’t have been any tougher. England were arguably a hand of God away from securing the World Cup just two-years prior and had Barcelona forward Gary Lineker netting 17 international goals in 17 games before the event.

Ray Houghton, who would go on to grab a famous winner against Italy during the 1994 World Cup, looped a header over Peter Shilton with just six minutes on the clock.

Ronnie Whelan then struck the bar in the second-half to peg England back, while Packie Bonner flung himself around like a cat on a laser-pen to preserve the Irish lead.

The shock win proved to be the high-point of the Euros as Ireland crashed out following defeats to The Netherlands and The Soviet Union, but both ended up in the final so, y’know, you can’t ask for too much can you? (We finished above England in the group, so that’s all that matters, right?) 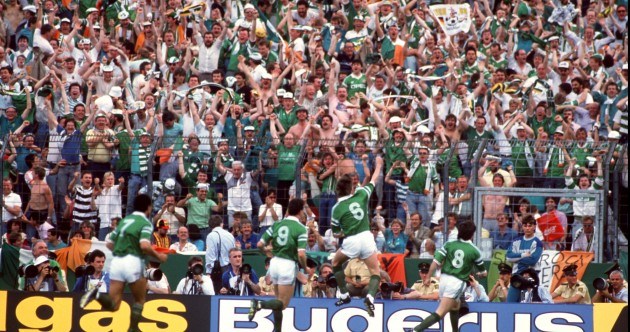 Houghton and co celebrate wildly with the travelling Irish fans at the Neckarstadion in Stuttgart after netting against England in the opening group game.

Shane Lowry isn’t the first Irishman to be seen fist-pumping on the final-day of The Open. Padraig Harrington won his first career major with victory at The Open in 2007 and he defended his crown in 2008 while also securing victory at the PGA Championship a month later.

During the 2008 Open, Harrington, who almost missed the tournament because of a wrist problem, went into the final round in joint-second behind Australian Greg Norman. Norman quickly fell away after a number of bogeys while Harrington kicked his game up a couple of notches.

A steady front-nine was followed by a tremendous back-nine in unfavourable conditions at Royal Birkdale, but the Irishman’s strokes were matched by Englishman Ian Poulter, who was hot on his tail.

As the two effectively went head-to-head, Harrington produced a couple of birdies and a magnificent late eagle, while Poulter came up with three birdies of his own during the closing stages.

Poulter matched Harrington’s final round score of 69, but having started the day four-strokes behind him, couldn’t make up the ground.

Collins was totally unfancied but managed to beat Eubank not once, not three times, but two times, the first by unanimous decision, and the second via a split decision.

Their second fight gained significant notoriety after Collins claimed he would be hypnotised during the bout after enlisted help from ‘guru’ Tony Quinn.

Collins didn’t acknowledge Eubank during his ring entrance and instead sat in his corner listening to his headphones. He adopted a more erratic and wild fighting style during the second fight, something which caught Eubank off-guard and allowed Collins to retain his title. 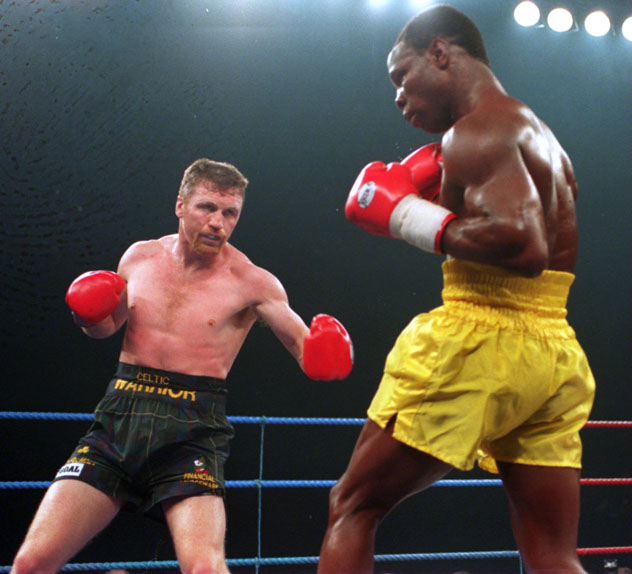 Even more unfancied than Collins or Ireland’s Euro ‘88 side was the cricket team who lined up against England during the World Cup in 2011.

Jimmy Anderson, Andrew Strauss, Kevin Pietersen and co were no match for the Irish on a remarkable afternoon in Bangalore, India.

Kevin O’Brien stormed to the fastest century in World Cup history, and ended up hitting 113 from 63 deliveries. Alex Cusack and John Mooney joined in with the innings of their lives to add to England’s misery.

Ireland crashed out at the group stage, but that didn’t really matter, the victory over England was enough to keep the Irish bars in Bangalore lively for the remainder of the tournament. 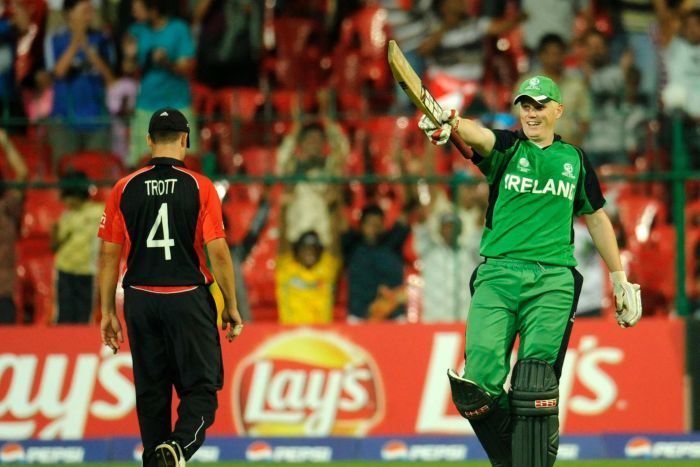