How the Irish clubs are getting on in Europe

ALL three SSE Airtricity League clubs competing in European competitions are in with a realistic chance of progress after encouraging results and performances in their respective first leg ties during the week.

Dundalk, Cork City and St Patrick's Athletic all take 1-1 draws into their second leg ties, although Dundalk must score an away goal after conceding a late equaliser in their Champions League qualifying clash at Oriel Park against FH Hafnarjordur.

Dundalk were looking good to take a first leg lead to Iceland after David McMillan fired them ahead midway through the second half.

But former Dundalk player Steven Lennon came back to haunt his old side with a 77th minute strike to give his side a vital away goal and a 1-1 draw to take into the second leg.

Dundalk had begun their 51st European match well, although it was the visitors who created the first clear chance of the match on 27 minutes, with Lilywhites keeper Gary Rogers called on to make an important save to keep out Atli Gudnason's fine curling effort.

Two minutes before half time, Dundalk's in form striker David McMillan spurned a great opportunity when Darryl Horgan's 30-yard free-kick was parried into his path by FH keeper Nielsen, but McMillan placed his shot over the bar from eight yards.

It was a big chance but the striker made amends in the 66th minutes with a superb side footed finish from Patrick McEleney's cross on a counter attack, his seventh goal in three games, to put the Lilywhites ahead.

But Scottish striker Steven Lennon, a former Rangers forward who spent six months on loan at Dundalk in 2010 and failed to score in nine appearances, silenced the home crowd with an equaliser 13 minutes from time, finding the bottom corner with a left footed drive after Bodvarsson's cross from the left was diverted into his path by Paddy Barrett.

Despite the disappointment, Dundalk will head for Iceland knowing they need to score to progress, and can take heart in the knowledge that they have scored far more and conceded far fewer goals away from home this season. 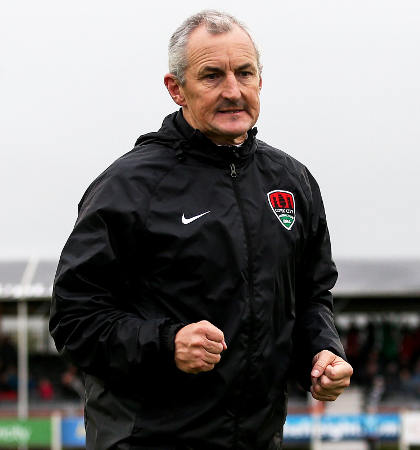 Cork City boss John Caulfield [©INPHO/Tommy Dickson]
There was a similar story for Cork City in their Europa League clash away to Hacken of Sweden, with City leading through a Sean Maguire penalty midway through the second half, only to concede a goal to their hosts with seven minutes remaining.

In a game played on an artificial pitch in Gothenberg, the Leesiders put a marker down as early as the 6th minute, when Sean Maguire fired the ball in the net only for the referee to rule the goal out for a handball in the build up move.

The home side hit back and City keeper Mark McNulty was called on to make a smart save from Paulinho to ensure the first half ended goalless.

But the small band of travelling supporters had something to cheer after 64 minutes when City took the lead.

Hacken's Baba Mensah was red carded for a challenge on Stephen Dooley inside the box, and for the third European tie in succession, Maguire fired City ahead with a penalty kick, this time driven straight down the middle of goal.

Despite being down to ten men, Hacken put the City defence under pressure and after O'Connor was forced to make a goal line clearance from a Paulinho chip shot, keeper McNulty was forced into a good save from Owoeri.

But with seven minutes left, the City defence was breached when McNulty could only push out an inswinging Paulinho free kick, and Owoeri pounced to rifle the loose ball into the net.

It was, none the less, a fine result for City, and sets the scene for an exciting second leg in Turners Cross next week.

No less impressive were St Patrick's Athletic, who came from behind to earn a deserved 1-1 draw with Dinamo Minsk in Belarus.

Pats began well and almost took the lead on 19 minutes when Billy Dennehy headed just over from a Keith Tracey cross, but they fell behind in the 25th minute when Minsk's Vladimir Korytko beat keeper Brendan Clarke with a well placed shot into the bottom of the net.

But nine minutes into the second half Pats striker Christy Fagan, the club's leading scorer in European competitions, once again proved to be the hero with a fine equaliser.

A long clearance from Clarke found Ian Bermingham in space on the left flank, and he cut the ball inside into the path of Fagan, who took a touch and curled a terrific shot into the far corner of the net for a vital away goal.

Pats had to withstand some pressure in a late onslaught from the home side, but they held out to set up a fascinating second leg tie in Inchicore on Thursday.

On this day in 2012: Celtic's historic victory over Barcelona as a tearful Rod Stewart looked on