Steven Reid: 'I'm not shy about going in hard on the younger footballers'

STEVEN Reid has never been impressed by fast motors or the high life, and he’s not slow to show the new generation what it really takes to make it as a top-level player.

It is early morning in Gatwick Airport. The sun is up but most of London is not. Steven Reid hasn’t slept.

He is 20 years old, gets paid £1,050 a week by Millwall Football Club and lives at home with his mum. But on this Thursday morning, Steven Reid has a new status.

The night before, Ireland defeated Iran in a playoff to qualify for the World Cup. So no longer is he a Millwall winger. Instead the prefix Irish international footballer is attached to his name. And even though his Aer Lingus flight has touched down, Reid’s head is still in the clouds.

He offers his new pals, Kenny Cunningham, David Connolly and Steve Finnan, a lift to Putney, where they’re all based. So they bus it out to Gatwick’s long-term car-park mainly in silence. This hour of the day isn’t conducive to chitchat. And then BANG.

“That your motor?” screams Kenny Cunningham, his face turning purple with laughter. Finnan and Connolly — men whose joie de vivre was kept secret from the public — have tears in their eyes from laughing so much.

The footballer of 2001 vintage has a certain image to live up to. And driving a red Citroen Saxo, complete with its tiny 1.1 litre engine, is decidedly untrendy.

“Two years it took me to live that down,” says Reid, now 32 and facing into the 11th, and probably last, Premier League season of his career.

“Soon as I got back in the squad for the next game, it was all anyone was talking about. We were playing for World Cup squad places and the chat around the dinner table was about two things — who’d make up the travelling party and would they have a whip-round to buy me a new car.

"They reckoned a Robin Reliant, the three-wheel van Del and Rodney drove in Only Fools and Horses, would have been a step up.”

This step back in time is used to illustrate the difference between then and now.

Neither Reid’s personality nor motoring tastes have altered — “As soon as I got my big move to Blackburn and the Premier League, I bought a 1.4 Citroen” — but modest 20-year-old footballers these days are an endangered species.

“The car-park at the club training ground is full of Mercedes Benz convertibles and all that flash. To me, it’s worrying because the guys driving them haven’t yet got to the first team.

"I see it day in and day out, these young guys who aren’t afraid to give you a bit of backchat, who want all the trappings of being a Premier League footballer but who sometimes forget that you have to produce the hard work in the first place to get there.

"When they train with the first team, I let them know what being a footballer is like when the tackles come in. It’s one thing I’m not shy about.” 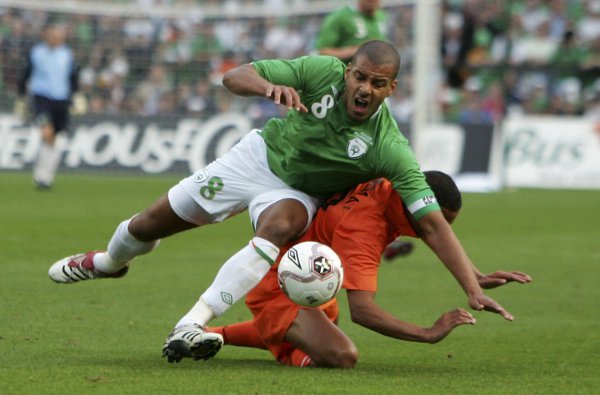 Reid during a clash with Holland in 2006

On other issues, he is more reticent. As an eyewitness to Saipan and the row that split the nation, the then 21-year-old Steven Reid was perplexed, having never seen anything as bitter or bizarre before or since.

Yet, like many of the younger members of that squad, he avoided being dragged into the McCarthy or Keane camps, McCarthy being the man who handed him his debut, Keane the player who went out of his way to offer medical advice when Reid’s career was in jeopardy following a knee operation in 2008.

“He was always decent, Roy,” says Reid. “We weren’t close because the age-gap was big. But there was a time when we lived near one another just outside Manchester and we’d meet every once in a while out walking our dogs.”

One of those walks and talks had the potential to end up in another row of Saipan proportions as Keane went into deep medical detail about the dark art of rehab while Reid went through a quiet panic attack.

“His dog [the famous Triggs] just sat at Roy’s feet as soon as he was told to, whereas mine was jumping all over the place, leaving dirty paw marks all over Roy’s clothes and refusing to listen to any of my instructions,” says Reid.

So as Keane spoke about ligaments and exercises, Reid fretted about the imminent dry-cleaning bill. Mud-wrestlers leave fights cleaner than Keane’s clobber was on that walk through Hale.

“Still, at least I got to meet Triggs,” jokes Reid about the Labrador whose impact on that World Cup was as great as any Irish player.

Reid, too, made his mark in Japan and Korea — days which proved to be the highlight of his time with Ireland.

From there, he’d play just 20 more games over six years in an Irish shirt before Giovanni Trapattoni crudely binned him, justifying his decision on the basis that he thought Reid’s career was finished.

Time — and the player — has proved Trap wrong.

Angered at what Trap had to say — and the fact there was no apologetic phone-call — he picked up the pieces and got on with his life, leaving Blackburn for West Brom, where he has just been handed a new one-year-deal.

“With Ireland, I still feel I never did myself justice in the shirt. My last three or four caps were my best. And then my knee went. That killed my international career. And it saddens me because they were the proudest moments of my career, playing for Ireland.

"The respect I was shown was incredible. I got to feel part of the country not just part of the team.

"Sometimes there were questions over allegiances — seeing as I, and other players, were English-born — but never from the squad, who made us feel as welcome as anyone.”

Post-knee operation, though, Trap made it clear he was unwelcome. And that was that. One career — his international one — was over.

Yet his club career went through a rebirth, with West Brom converting him into a right-back after signing the supposedly crocked midfielder in 2010. Three years on, he’s still there, although he knows the finish line is in sight.

“Soon — in a year or two — I will have serious questions to answer. Will I drop down the divisions? Will my body cope with the fixtures? I’m realistic enough to know that at 32, I am not going to get 30/35 games.

But if I could get 15 or 20, then I am at that stage in my career where I could accept that. This is the League to be involved in and with Nicolas Anelka on board, I can see us having a good year.”