LONDON, ENGLAND - MARCH 12: Conor Murray of Ireland celebrates after their sides victory during the Guinness Six Nations Rugby match between England and Ireland at Twickenham Stadium on March 12, 2022 in London, England. (Photo by Shaun Botterill/Getty Images)

IRELAND JUST about beat the English 32-15 in Twickenham in a game that involved an early red card, plenty of kicks and a dominant English scrum.

Tries from Hugo Kenna, Jack Conan, Finley Bealham and James Lowe made the scoreline look like a hammering, but Ireland were made to work for their win for large parts of the game.

Before the game both sets of players and fans came together in applause in honour of Ukraine and their ongoing fight against the Russian invasion. 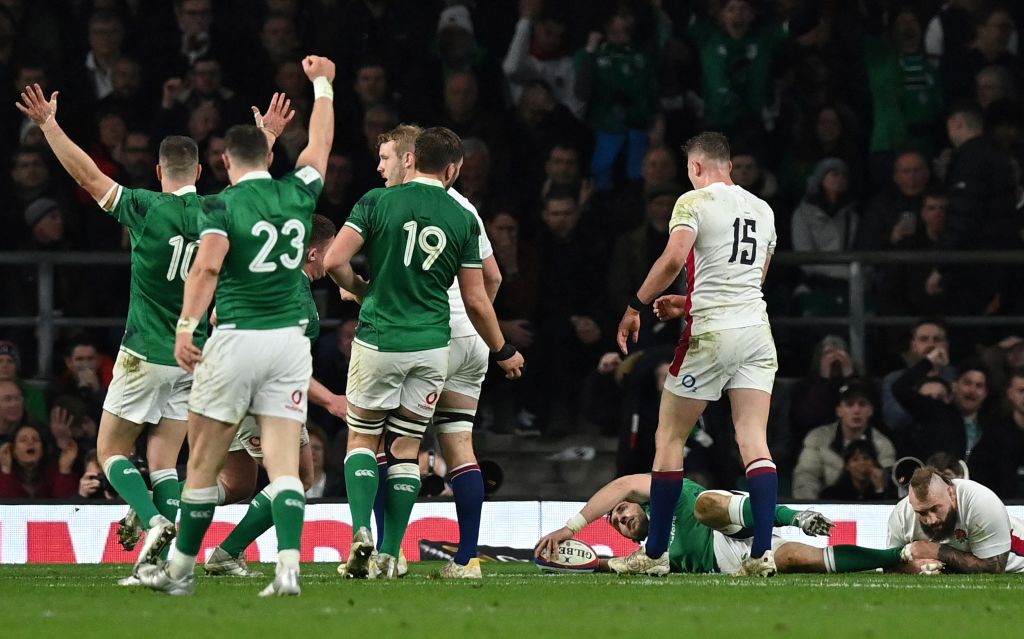 Ireland lost Ryan to a head injury early on for a clash  with 6ft7 Ewels.The Bath lock was sent off for dangerous play within the opening 2 minutes.

This was the referee Matheiu Rayna's second red for a high tackle in a Six Nations game between Ireland and England. Bundee Aki recieved his marching orders last year, Charlie Ewels this year.

Ireland made the man advantage count with a further score when James Lowe touched down after a brillant passing move.

Dan Sheehan sets Josh van der Flier away with a lovely offload inside off the left. The Leinster man found his team-mate in space and the winger raced home to the jublant Irish away crowd.

Ireland's confidence hit new levels when they turned over an English scrum.

The next phases of play showed Ireland's attacking intent and only for a knock on by Jamison Gibson-Park Ireland would have had a second try with Caelan Doris touching down.

Ireland's scrum felt the blow of losing Ronan Kelleher and Andrew Porter and with that lost battles with the English is the first half.

Marcus Smith converted a penalty to reduce the deficit to 3-8 on 18 minutes.

English momentum grew and a superb passing move brang Eddie Jone's side to the Irish line.

Sexton chipped in behind, but the ball squeezeed over the line in the English 22.

Ireland struggled against the French front row power 3 weeks ago and were second best in that department.

Tadhg Beirne was penalised for offside at an England line-out.

Marcus Smith missed the penalty and Ireland's five-point lead was kept.  Smith took the next penalty after Sexon was penalised for a needless offside. He made it 6-8 with 32 minutes gone.

Gibson-Park showed initiative with the tap 'n' go, before setting up the onrushing Keenan for the second try

Johnny Sexton converted and Ireland lead 15-6 with 38 minute on the clock.

Irealand were nealy in for a third try after the restart when Gibson-Park with the quick tap 'n' go at the line in for a try. Henderson knocked it on

Ireland like the first half gave away stupid penalties and gave the English another chance in the scrum.

Shortly after England got a penalty after Hugo Kennan caught a ball in the Irish 22. Marcus Smith again made it 15-12

Kennan again struggled to hold onto an England kick, which handed England a scrum in Ireland's 22.

Ireland gave away another penalty and Marcus Smith, who else converted to make it 15-15

England dominated the half and clearly saw Kennan as a weak link.  Sexton converted the first Irish score of the second half

Johnny Sexton had a pass intercepted but the play was brought back for an Irish penalty.

Ireland nearly sealed the game with a third try when  Hugo Keenan won a Garry Eoghan to carry the ball over half way.

Ireland did score a third try though when Josh van der Flier entered the English 22 with a big carry.

The ball was worked out to the right. Andrew Conway was nearly in, but Conor Murray was on hand to pick out fellow substitute Jack Conan, who plunged over the line to make it 15-25.

James Lowe ran a magnificent line and found by Murray  Finley Bealham touched down to make it 32-15 to the Irish and to top off a crazy game in London.

Ireland got away with it in Twickenham and with that ended their drought of no wins against the English away since 2018.