Ireland can justify their confidence ahead of England test

“WHEN they come hunting for you now they are a throwback to the good old days when you did not want to be anywhere near a ball in Dublin as the world fell in around your ears.”

Ahead of Saturday’s encounter against England, Ireland find the route to Twickenham littered with bouquets. That one from former England and Lions centre Will Greenwood.

This is former Ireland out-half Ronan O’Gara: “There’s massive self-belief there. I think if it goes to the wire I’d back the resolve of the Irish, that’s what I hope they [England] are worried about cos there are some fantastic players, fantastic people on the pitch.”

And just in case you think this opinion is not shared, a quick look at the bookies’ odds confirms that Ireland are 5/6 favourites to win their third Six Nations match on the bounce.

England is the next test. Many will say it’s the crucial test, but Ireland have enjoyed an excellent record against England since the turn of the century, making France the crucial test if they do what the critics expect on Saturday. 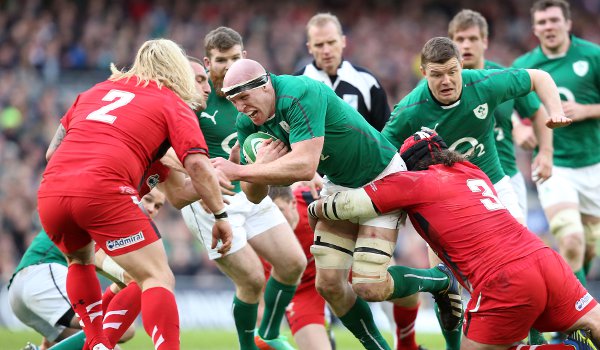 The optimism is well placed. Ireland have not recently enjoyed the kind of consistency that started with a stellar performance against the All Blacks in November and continued through two home wins against Scotland and then Wales.

New coach Joe Schmidt is being heaped with credit. So too performers like Peter O’Mahony, Jonny Sexton and Jamie Heaslip, backed up by Conor Murray, Rob Kearney and Devin Toner.

Yet Ireland’s strength has been in the power of this collective, in the efficiency, aggression and cohesion of their play since November.

Under Schmidt, the ethos appears to be one of attacking the opposition where they are strong, so you can again expect to see the execution of a strategy that will target the English front eight.

The home side look to be without prop Dan Cole and while his absence is a small victory ahead of kick-off, there are bigger battles which must be won.

On current form, Courtney Laws appears capable of competing with Paul O’Connell, but not for the duration. The battle up front could yet be epic.

According to O’Gara, any gains here will be exploited by an Irish back division that has more than an edge in terms of pace and skill.

Coming from the two-time European Cup winner, that sentiment invokes memories of 2006 when O’Gara somewhat controversially stated: “We always expect to beat England.”

Saturday will be tight, but that sentiment hasn’t enjoyed too many off-days this century.

Both out-halfs have enjoyed solid openings but Sexton’s performance in the 26-3 defeat of Wales was eye-catching. Having beaten Farrell to the Lions number 10 shirt, the Ireland playmaker will not feel threatened by his opposite number.

Both abrasive and mobile, the fancy stuff will be shelved in favour of grinding out an advantage at the scrum and lineout. Hartley is a fierce competitor. Parity here is vital.

The English second row has been in receipt of much credit of late and has enhanced his reputation with some noteworthy lineout leadership, but this head-to-head with O’Connell will be a battle England must win if they are to set a platform for victory. O’Connell on his game will prove too much.