JOHN MITCHELS made it four Lancashire Men’s Senior Football Championship titles in a row on Sunday after overcoming St Brendans 0-10 to 0-08 in a tight and tense affair at Old Bedians in Didsbury, Manchester.

The Liverpool side were looking for an eighth county title in 10 years while St Brendans last tasted success in 1996 but just as it was when these clubs met in the 2013 decider, it was Barry Morris’s charges who prevailed.

It appeared that that lack of silverware was spurring the Chorlton side on in the opening exchanges as they thundered into tackles and tried to impose their physicality on the game.

Despite an early score from a placed-ball by Michael Higgins, the reigning champions found themselves three points to one down after 10 minutes.

All three St Brendans scores came from frees as the Mitchels defence were called for over-carrying and late tackles with the boot of Stephen Sands punishing the misdemeanours.

Brendan Grieve’s men were edging the battle at this stage, restricting the play to between the two 45 metre lines with the likes of Chris Morris, Stephen Rafferty and Conrad Tierney to the fore.

However, a bulldozing run by Mitchels captain Pauric McGuirk midway through the half resulted in the ball finding its way to Niall McCartan, who slotted over to signal a change in momentum. 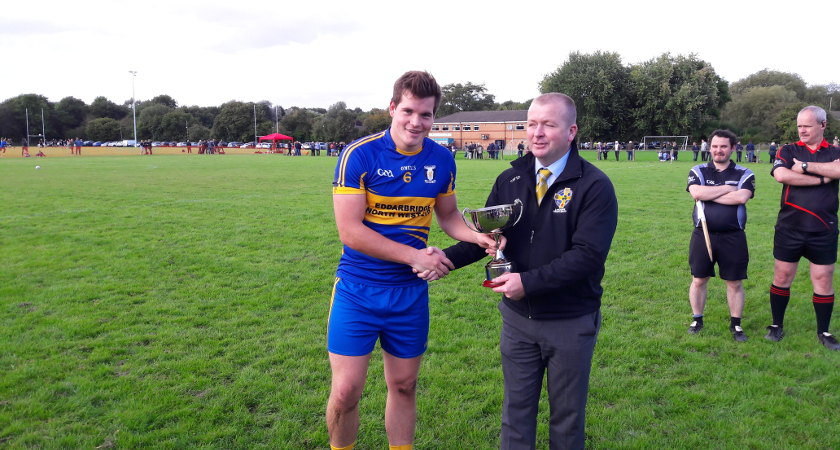 Unusually quiet inside, Michael Molloy dropped deeper and soon began to influence proceedings, drawing a foul before knocking over the resulting free to level matters.

McCartan landed a beauty from the right, linking well with the pacey Marty Carey, but back came St Brendans to restore their lead through Sands and Tierney.

The right flank proved fruitful again as Darren Russell found space to fire over, followed by another Molloy free, while the Donegal man set up Craig Owen, who handed his side a 0-7 to 0-5 lead at the break.

Morris tagged one back immediately after the restart as St Brendans looked to carry the fight to their opponents again, but Higgins and another Molloy placed-ball quelled the fight back.

Still St Brendans were not done as Sands and a fine Aaron Murtagh effort reduced the arrears to one before the lively McCartan grabbed his third of the day from a tight angle.

That proved to be the final score of the contest as the immense physical battle began to take its toll on both sides and the final 10 minutes saw Mitchels able to keep a fading St Brendans at arm’s length to ensure victory.

“It was exactly what we expected coming up here,” said Morris afterwards. “We watched St Brendans semi-final against Oisins and they were very clinical.

“It was a tough, bruising game and one which we were glad to come out of and we sneaked through in the end.”

Man of the Match: Pauric McGuirk stood up to the physical battle presented by St Brendans and led his team back into the contest with vital interceptions and surging runs.