SHAMROCK ROVERS and Dundalk continued their winning starts to the season in the second round of SSE Airtricity League Premier Division fixtures at the weekend.

Rovers moved to the top of the table on goal difference after their Republic of Ireland international striker Graham Burke scored five goals in a 6-0 win over Cork City at Tallaght Stadium.

It was a record league defeat for City, and their heaviest since they lost 7-2 away to Derry City in August 1987.

It took until just after the half hour mark before Rovers broke the deadlock when Burke fired in the opener from the edge of the area, and he doubled his tally three minutes before the break with a close range finish on the turn from a Ronan Finn cross. 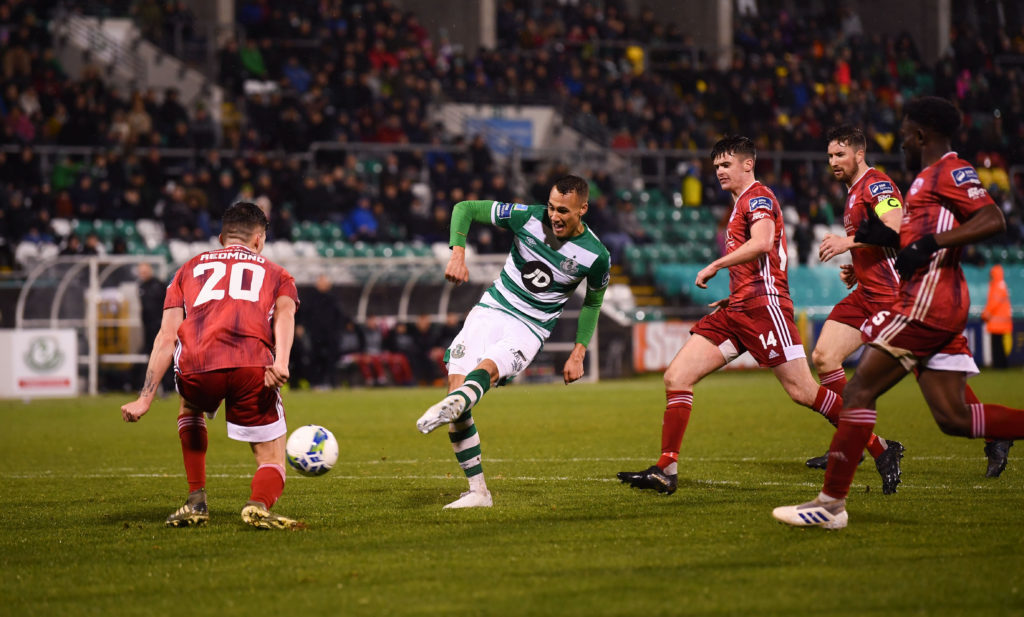 An already difficult night for the visitors got worse on the stroke of half time when Dashane Dalling was shown a straight red card for a wild challenge on Joey O’Brien.

From then on it was one way traffic, with Jack Byrne adding a third goal on the hour, before Burke completed his hat-trick 15 minutes from time with a terrific curling shot.

But there was still more to come from the Rovers striker, and he added his fourth with a deflected strike from the edge of the box before curling in his fifth of the game with a left footed finish to round off a memorable performance.

Meanwhile, Dundalk's last trip to Tolka Park to face Shelbourne was in 2013 and ended with a 2-1 win, and the first visit in 2020 delivered a victory by the same score.

By coincidence, Andy Boyle opened the scoring in the 2013 clash, and he did so again seven years on, when he tapped the ball over the line at the far post after Sean Hoare had flicked on Michael Duffy’s corner.

Shels pulled a goal back eight minutes into the second half when Gary Deegan seized on a loose clearance and blasted a shot in off the post past Dundalk keeper Gary Rogers.

Bohemians picked up their first points of the season with a 2-0 win at Waterford, although the weather affected the quality of a game played in wet and windy conditions.

Both goals came in the final four minutes of the first half, although the first was a bizarre own goal by Waterford's Sam Bone, who sent a diving header past his own keeper from a cross into the box by Bohs winger Kris Twardek.

Bohs doubled their lead on the stroke of half time , when Danny Mandroiu was brought down in the box, and the Republic of Ireland Under 21 international picked himself up to convert the resulting spot kick.

Two first half goals to secure a 2-0 win for the away side was also the story at the Showgrounds, where St Patrick's Athletic picked up their first win of the season at the expense of Sligo Rovers.

The deadlock was broken after 26 minutes in spectacular fashion by Pats' Ronan Hale, who picked up a loose ball, advanced forward and rifled a cracking 25 yarder into the net.

The second goal arrived on 36 minutes when Billy King and Robbie Benson combined down the left to set up Chris Forrester for a smart finish from eight yards.

Although Pats were reduced to ten men in the 68th minute when a second yellow card was shown to Oliver Younger, they held out comfortably to collect the points.

Sligo joined Cork City at the bottom of the table as the only two teams to be pointless after two games.

A last gasp equaliser from Derry City substitute Adam Liddle rescued a point for the Candystripes in a 1-1 draw at home to Finn Harps.

Harps had looked to be heading for their first ever win at the Ryan McBride Brandywell Stadium after taking the lead in the 33rd minute.

The goal was one to forget for the Derry defender and ex-Finn Harps captain Ciaran Coll, who misplaced a pass back towards his goalkeeper Peter Cherrie, and Ryan Connolly pounced to steer the ball into the unguarded net.

But in the final minute of stoppage time, Walter Figueira's neat footwork created space for a cross from the right, and Adam Liddle converted to earn Derry a share of the points.