AS IF winning the prestigious Cheltenham Gold Cup for the first time wasn’t enough, Willie Mullins announced after his second and successive victory that he wants three.

Mullins has been known in the sport of horse racing as one of the finest trainers in the world for years, and yet the Gold Cup had always eluded him, finishing in second on six occasions. But now, with the deadly duo of Paul Townend astride Al Boum Photo, Mullins is high on life, with his first two claims of the accolade coming in back-to-back years. Following his second Gold Cup triumph with Al Boum Photo, the BBC’s reporting that he wants three and will be conditioning his champion horse with a similar campaign to this season to have a great shot at victory.

Since the foot-and-mouth crisis of 2001, which cancelled the Cheltenham Festival, only one horse has won back-to-back Gold Cups, Best Mate. Winning in 2002, 2003, and 2004, Al Boum Photo has already joined Best Mate in the elite class of horses to win two Cheltenham Gold Cups on the trot.

In this post-war era of horse racing, only five horses have won the accolade in successive years, with Cottage Rake, Arkle, L’Escargot, and Best Mate now being joined by Al Boum Photo. Of the earlier four, three went on to win three cups in three years – only L’Escargot failed to achieve the three-peat.

Still only eight-years-old – the same age as Best Mate when he won his second Gold Cup – there should be plenty left in the engine for Al Boum Photo, especially as Mullins will be meticulously managing the horse from now until the 2021 Cheltenham Festival. 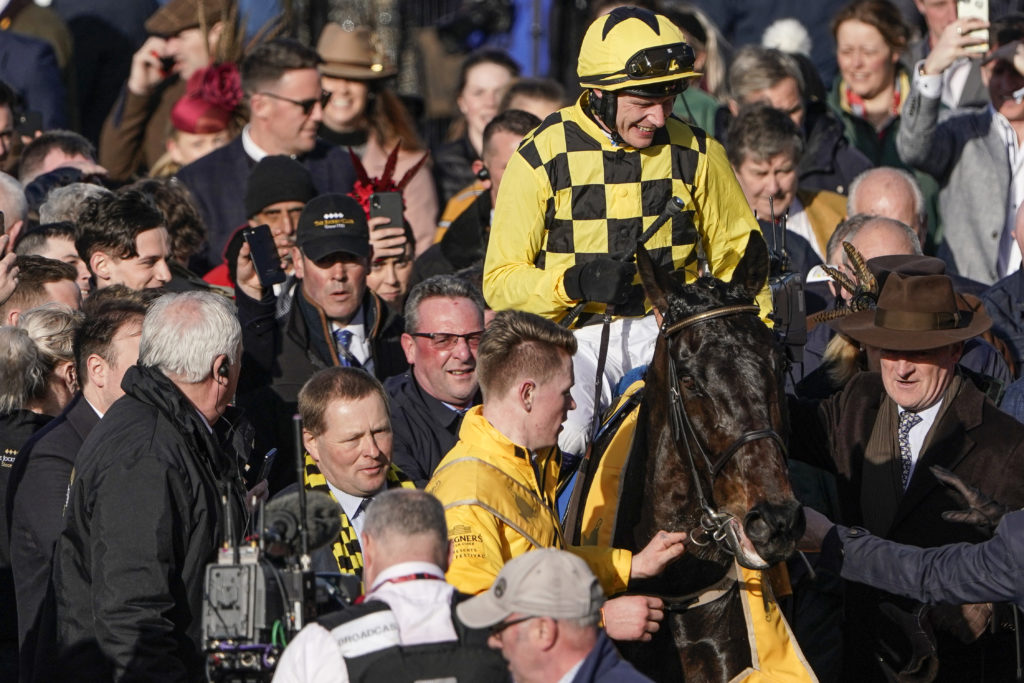 In 2019, Al Boum Photo kicked off the year with a victory in the Tramore New Year’s Day Chase. He then landed Mullins’ first-ever Cheltenham Gold Cup in March, and then he rode to second in the Punchestown Gold Cup in May, trailing stablemate Kemboy by two lengths.

Mullins saw an opportunity at this year’s Tramore New Year’s Day Chase with the soft ground, saying that it brings the big horse’s stamina into play. He was absolutely correct, of course, with Al Boum Photo charging to a six-length triumph over fellow Mullins-trained Acapella Bourgeois. Then came a historic second successive Gold Cup for the yellow-and-black chequers of Al Boum Photo and Paul Townend.

His trainer has stated that a lighter schedule is the plan once again in the running to the Cheltenham Gold Cup, similar to the workload of 2019/20. So, one could presume that the plan was to have Al Boum Photo run in the 2020 Punchestown Gold Cup. However, while there is still horse racing in place around the globe, with William Hill’s horse racing betting catering to ongoing events in South Africa, the United States, and Japan, the British Horseracing Authority’s lockdown will likely see the Punchestown Festival cancelled. The lockdown is currently scheduled to finish at the end of April, but the Punchestown Gold Cup Day is scheduled for 29 April, so it could be cancelled or postponed if Horse Racing Ireland follows suit.

Like the Cheltenham Gold Cup, Mullins has been on a hot streak at the Punchestown Gold Cup race, winning in 2018 and 2019 with Bellshill and Kemboy, respectively. In the thinking of ‘if it isn’t broke, don’t fix it,’ Mullins may have been eyeing up Punchestown again this year for Al Boum Photo. Horse racing in Ireland has been cancelled until at least 19 April, so there’s a chance that the County Kildare-based festival goes ahead.

If Mullins can’t get Al Boum Photo out before the traditional end of the jump season, he’ll be in a similar to his fellow trainers due to the UK and Ireland lockdowns. How preparation goes in light of these cancellations will be very telling for Mullins’ hopes of a historic treble.