Padraig Harrington is named European Ryder Cup Captain for 2020 during a press conference at Wentworth on January 08, 2019 in Virginia Water, England. The 43rd Ryder Cup will be held in September 2020 (Photo by Andrew Redington/Getty Images)

Sport’s worst kept secret in recent months is out. Padraig Harrington will captain Europe in the 2020 Ryder Cup at Whistling Straits in Wisconsin.

Looking at the record books, it’s a daunting task for the 47-year-old, especially when you consider that only once in the last 15 years has the away side been victorious. That came at Medinah in 2012, but there’s a reason why that contest was nicknamed “the miracle”, such was the fortune and fierce determination required in the singles on the final day.

Certainly, the easier option for Harrington would have been to wait for the home match in Rome in 2022. But we shouldn’t be surprised. 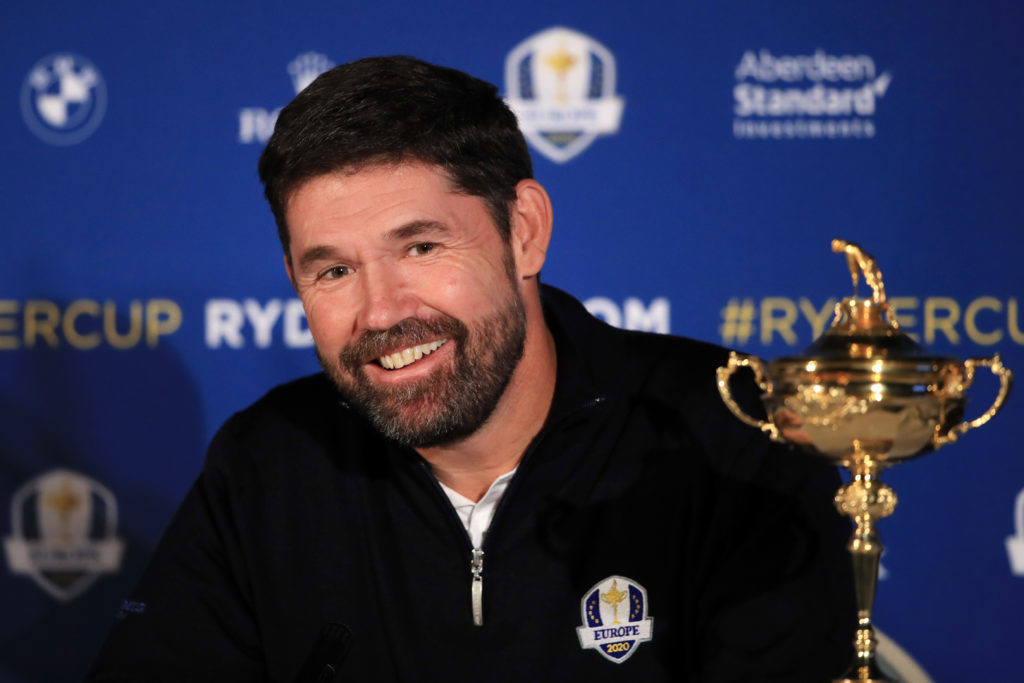 Padraig Harrington speaking to the media as he is named European Ryder Cup Captain for 2020 during a press conference at Wentworth on January 08, 2019  (Photo by Andrew Redington/Getty Images)

The Dubliner doesn’t go for easy. With resilience forming the bedrock to his golfing success, he relishes a challenge which is why he was the frontrunner for this “away game” and was so publicly backed by European stars, alike. At least, he will take over a side buoyed after crushing the USA in Paris, last September, under the stewardship of Dane, Thomas Bjorn.

Harrington will be a different type of leader to Bjorn. Less emotional and, maybe, less warm. But, definitely, more ideological and more of a man for the finer details. That’s not to say he will be lacking personality and churning out all the old clichés.

No, certainly, not. Unlike many past captains, at his coronation, last Tuesday, at Wentworth, he admitted feeling “trepidation” of how he was putting his “legacy on the line.” 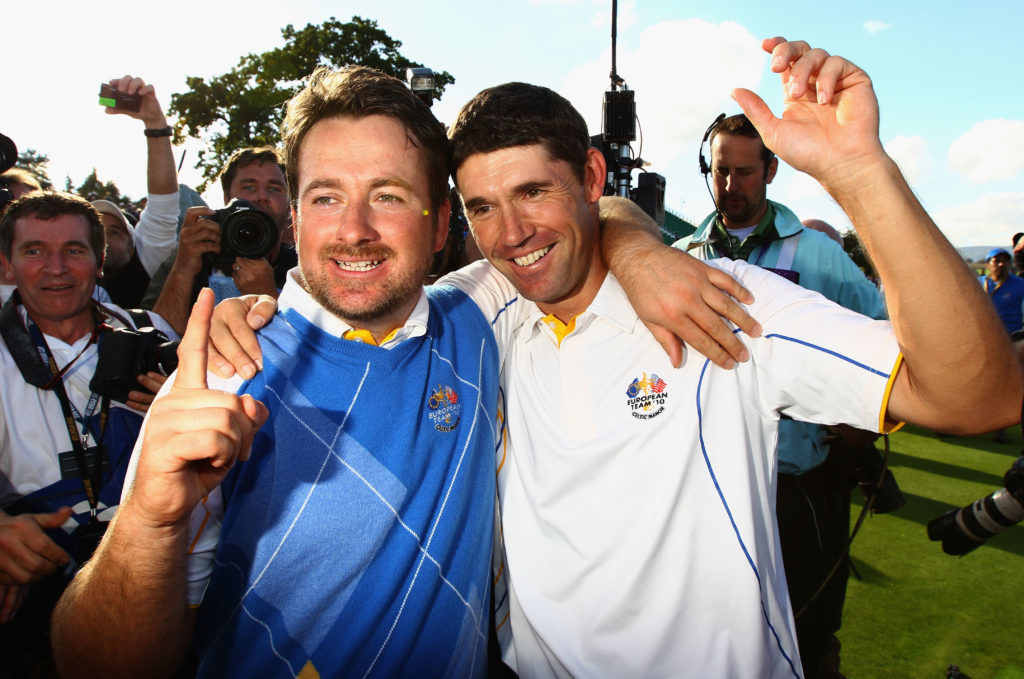 Graeme McDowell of Europe celebrates his 3&1 win to secure victory for the European team on the 17th green with Padraig Harrington (R) in the singles matches during the 2010 Ryder Cup at the Celtic Manor Resort on October 4, 2010 in Newport, Wales. (Photo by Richard Heathcote/Getty Images)

Being a three-time major champion, it seems hard to believe that his position in world golf is at risk. But that’s how Harrington is viewing it which reinforces the view that he will be giving this job his all, as if we didn’t already know that.

He had a little dig at Nick Faldo’s “half hearted” attempt as captain in 2008 and also spoke of changing the qualification system from four wildcards to three.

Elsewhere, he showed his captain characteristics already by defending Rory McIlroy amidst questions over the Ulsterman’s commitment to European golf after he branded the continent’s tour “a stepping stone” to the American PGA Tour, where he now plies his trade permanently. 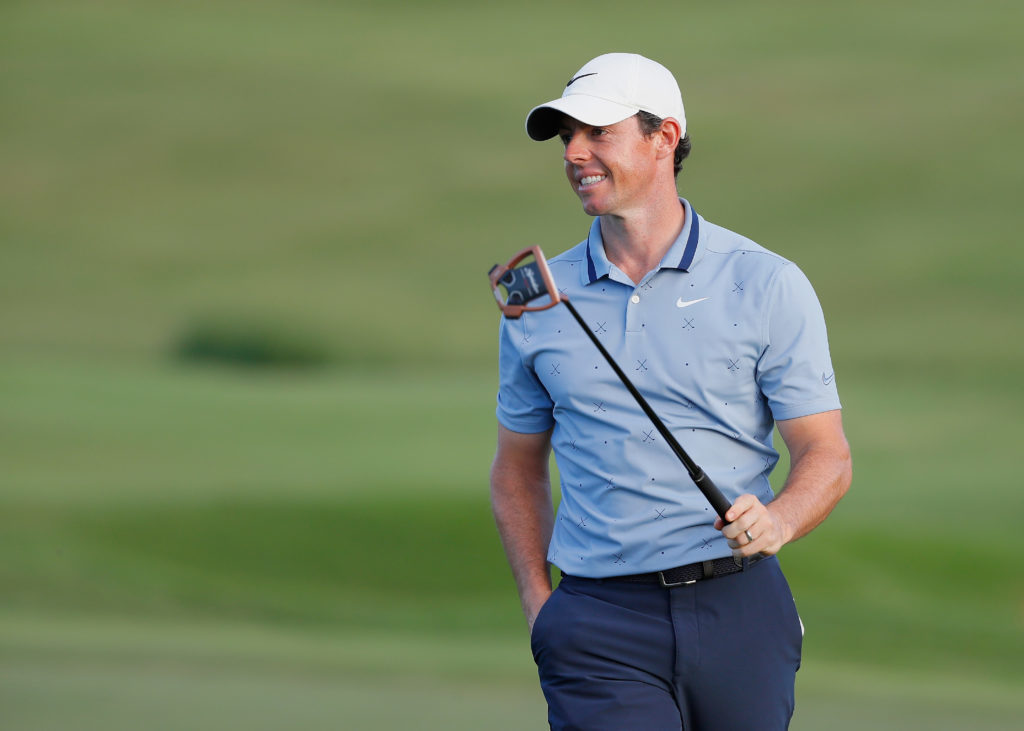 Rory McIlroy reacts on the 18th green during the final round of the Sentry Tournament of Champions at the Plantation Course at Kapalua Golf Club on January 6, in Hawaii. (Photo by Kevin C. Cox/Getty Images)

“I can only look at his (McIlroy) actions,” Harrington said. “That man loves the Ryder Cup. He has become a leader in the team room. He gives so much to the Ryder Cup. He will be 100% behind, and in, that Ryder Cup team, there’s no doubt about it. You just have to know the man behind the scenes.”

However, while, clearly, Harrington has his feet under the table and is looking a brilliant fit, the one characteristic where you could find a chink in his armour is, ironically, in his manic search for perfection. For instance, after winning the last of his three majors in 2008, he decided to change his swing, believing he could get even better.

Yet it didn’t work, and his career suddenly went downhill as he suffered a seven-year barren spell in Europe and America. Looking from the outside in, you would be forgiven for thinking that ripping up a winning formula was an illogical move.

Indeed, this is where Harrington’s success could hinge. While he will undoubtedly leave no stone unturned, you get the feeling that if his tenure as captain of Team Europe did turn out a failure, his obsessive and ambitious nature overriding rational judgement is where his downfall would, most probably, come from.