LAST year the margin was two, this year it was one. Ultimately the result remained the same as Sean McDermotts sealed their sixth successive Warwickshire Senior Football Championship and their eighth of the decade with a 3-5 to 1-10 victory against Roger Casements.

The champions will hit the road in just over a week’s time to take on Yorkshire champions Hugh O’Neills in the quarter-final of the All-Britain Junior Football Championship but to get there they had to navigate a fraught second-half against Roger Casements after John Dowling’s dismissal shortly before half-time.

It was the fourth successive clash between the two clubs in the final and this was the closest of the lot as Casements ratcheted up the pressure on McDermotts who needed to be at their best defensively to keep the Coventry challengers at bay.

Casements will rue the ten wides they clocked up on a rain-sodden pitch at Pairc na hÉireann, the game only given the go-ahead after a pitch inspection on Sunday morning. 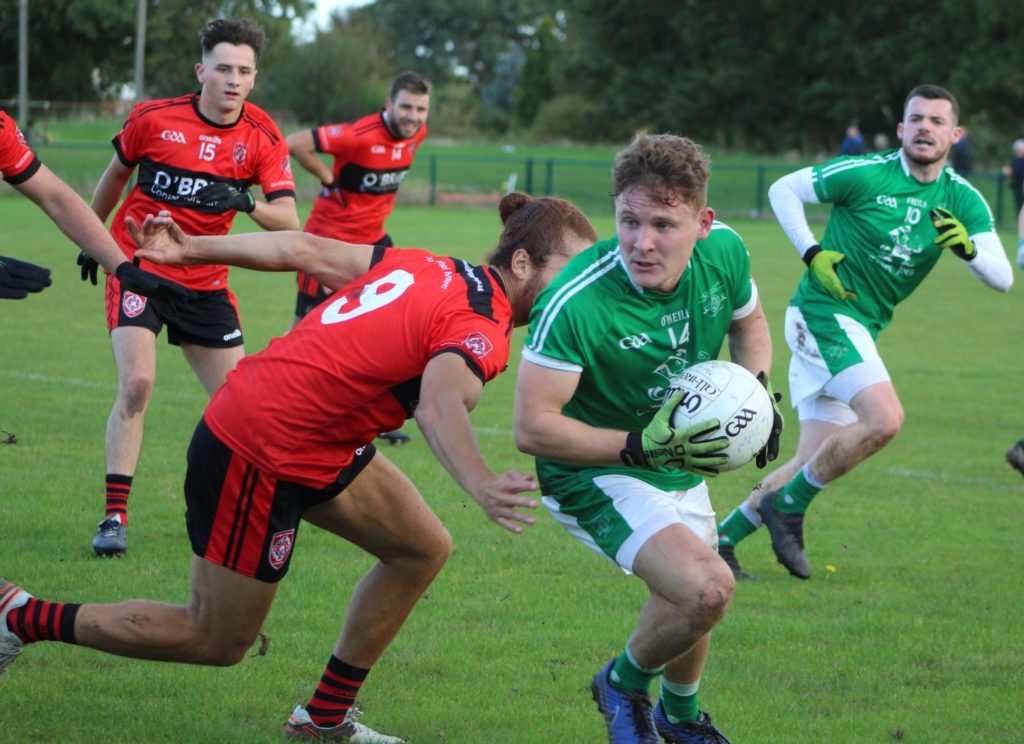 Despite coming up agonisingly short, this was another encouraging performance that demonstrated their progression in recent seasons and their reward for making the county final is entry into the All-Britain Shield competition and a trip to face Newcastle’s Cú Chulainns in the quarter-final.

It was McDermotts who started the brighter of the two sides, Niall Gilbride opening the scoring from a free before Declan Staunton raced through to narrowly fire over Callum Browne’s crossbar.

Back came Casements with a Daniel Walsh free that was followed by the first goal of the game, Tom Massey flicking a Walsh free in off the post.

Joel Powney went close for McDermotts before they struck back through James McDowell who ghosted through the Casements defence to fire low beyond Browne.

Browne needed to be alert to keep out a Gilbride rebound but McDermotts were looking threatening and when Paddy Willis took a chance from full-back it was his pass into Joe Owens that concluded an excellent team move for their second goal of the half.

Jack Keogh landed two points (one free) in reply before the interval to reduce the deficit to three but it was the straight red shown to Dowling that gave them fresh impetus with the extra man in the closing thirty minutes.

McDermotts doubled-down in defence and were rewarded with a swift counter-attack that culminated in Staunton being hauled down for a penalty which Conal Dowling tucked into the corner of the net.

It proved a crucial score, for McDermotts would go some twenty minutes without adding to it as Casements looked to seize their numerical advantage.

A dropping Keogh side line ball nearly ended with Massey flicking home his second goal yet points from Ronan Cunningham and Walsh from a forty-five nibbled away at the lead.

McDermotts conceded twenty-three frees across the match, two of which presented Keogh with the chance to bring Casements to within just one point.

With the championship firmly on the line, it started to look like Casements were going to end a fourteen year wait for the title.

McDermotts did extremely well in those closing stages to stifle their opponents, hitting them out of midfield to score a vital fifth point through Michael Mannion.

Casements needed to find two scores in the last few moments but they could only secure one, McDermotts rallying and harrying the ball away from them in the final seconds to run the ball out of danger and secure a hard fought victory.