GALWAY city, which started out life as a simple fishing village, is increasingly seen as the cultural, culinary and entertainment capital of Ireland.

Shortly, the International Arts Festival will be kicking off, followed by several other festivals of every hue and type, right through to October — craic ’n’ roll guaranteed all the way.

Of course, even outside festival time Galway has plenty to offer, with more pubs featuring music and craic than you could reasonably shake a bodhrán stick at. For gigs of every type (rock to traditional, and every stop in between), head for Roisín Dubh on Upper Dominick Street; if you want to immerse in traditional music, Tigh Neachtain, Cross Street is a gem of a place, and nearby Busker Browne’s is both gastropub and a place for tremendous Galway craic.

Once the wine capital of Ireland, it’s natural that the merchants of the city developed a reputation for fine food. The ethos remains the same and Galway probably boasts more restaurants, gastro-pubs and upmarket cafes  per square mile than any other part of Ireland.

But of course you could go to Galway with nothing more in mind than to wander through its ancient streets. The walls of the city date back to 1270, mostly all gone now. But the body of the town, centred on Shop and Quay Streets, still retains the feel of an ancient, handsome, large village — one with a disproportionate amount of places to drink, let it be said.

Must-sees include the Lynch Memorial situated in Market Street — a tribute (if that’s the correct word) to Chief Magistrate James Lynch FitzStephen, 1493, who hanged his own son, thus giving the English language a new word; although to be fair, other jurisdictions, notably in the US, also claim this grisly honour.

An area with a more uplifting theme is the Spanish Arch and Spanish Parade, perhaps the most distinctive part of Galway. This 16th century structure recalls the trade formerly carried on with Spain; its main purpose was to protect galleons unloading wine and spirits.

Close by, the Galway City Museum is a surprisingly modernist looking construction amongst the rest of the weather and history worn buildings of the city. Home to a number of fascinating artefacts, the museum is currently featuring an exhibition of paintings by Maurice Quillinan called Music on the Water.

The museum’s permanent exhibition ‘Galway — Within the Walls’ is a must for anyone with an interest in history. Little is known about the city prior to the 12th century — it first appears in recorded history as the place where Toirdhealbhach Ó Conchobhair, king of Connacht erected a fortification at Bun na Gaillimhe (the mouth of the River Galway).

This fascinating exhibition traces events from there to 1230, when the Anglo-Norman Richard de Burgo fought with Gaelic Irish at Galway — but was forced to withdraw. Richard returned in 1232, this time prevailed, and built the first stone castle in Galway. The story of life in medieval Galway is brought alive in this collection of artefacts, drawings, exhibits and paintings.

The museum also features a sobering permanent archive of the men from the Connaught Rangers who died in world wars and other campaigns for the now defunct British army regiment.

Co. Galway, home to the largest Gaeltacht in Ireland, stretches from the wilds of Connemara through the Corrib country and on to the banks of the Shannon. It has everything you could want in a holiday — and then some.

This westerly land is the more spectacular, the most evocative part of Ireland. With its quintessential Irish countryside, it is the Emerald Isle of films, postcards and song. Stretching between Lough Corrib and the Atlantic, the area is dominated by the majestic Twelve Bens mountain range and bordered by the deeply indented Galway coastline, where Ireland eventually crumbles into the sea.

To the east, beyond the low mountains of Slieve Aughty, is a more fertile plain — the fields of Athenry really do lie low — eventually leading to the more gentle River Shannon and Co. Roscommon. Throughout the county are ancient towns such as Ballynahinch, Leenane or Recess, which look as if they’ve tumbled out of a Disney vision of Ireland.

If you journey out across north Connemara, through the towns of Moycullen, Oughterard, Maam Cross and on to the capital of west Connemara, Clifden, you’ll be bowled over by the breathtaking scenery the county has to offer. This is an area of exceptional beauty, with towering peaks, wild bogland and tiny crofts. Life has always been hard here, with every scrap of land utilised. Generations of Galway people have tried to scrape a living from the mean-spirited soil — some succeeded; many others emigrated in droves.

In the 19th century even the bog cotton — the little white plants that dance in the breeze of a summer’s day — were put to use. In the town of Carna, in former times, a factory employed local girls to make buttons, using the bog cotton for their fillings.

Clifden itself is perched above an inlet of Ardbear Bay on the edge of the Atlantic and is an ideal base for touring north Connemara. This is where the Connemara Pony Show is held on the third Thursday in August, and if you want to get a real slice of Connacht life — or indeed want to buy a horse — you should try to make it for this unique occasion. 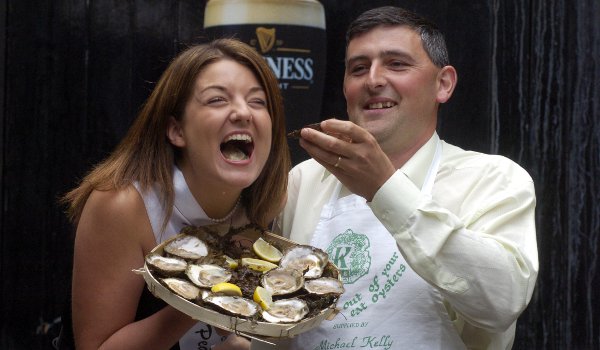 Galway has not just one but two oyster festivals

The city has become famous in terms of festivals — from the Galway International Arts Festival which begins next week (July 14-27) to the equally world famous Galway Races (July 28-August 3).

But Co. Galway is also home to a whole range of festivals and gatherings over August and September.

These are the ‘other Galway Races’, the Omey Races take place annually at Omey Strand, Claddaghduff in Connemara, Co. Galway. The setting is spectacular, and the races attract up to 5,000 people.

With up to nine races on the card, there’s opportunities for young, upcoming jockeys to hone their skills. And even if you don’t back a winner, you can glory in the dramatic scenery of Connemara.

The west coast fishing village of Kinvara is an almost impossibly picturesque fishing village with all the accoutrements any self-respecting Irish village should have — massive mediaeval castle overlooking the bay, listed Georgian courthouse, a thatched hotel, small pastel-washed houses, neat little shops all independently owned, and an ancient fishing harbour.

Cruinniú na mBád, or The Gathering of the Boats festival, honours the local boat, the Galway hooker, with races, exhibitions and loads of craic. Some of the races require the boats to be filled with turf — the original purpose of the hookers was for commerce, including the transportation of turf.

This is a friendly, exciting and very different festival.

The Great Spin Out West (GSOW) is the fastest growing cycling event in Ireland. Taking place every August in Connemara, with all proceeds going towards Cancer Care West. Starting and finishing in the lovely town of Oughterard, the 125 km route takes in some of Galway’s most scenic views and landmarks.

This festival showcases the life and work of Oscar Wilde in a west of Ireland setting. The huge influence the west of Ireland had on Oscar is not often commented on. His father, in particular, Sir William Wilde, has strong family connections with the west and displayed a huge interest in the area. The festival aims to educate and entertain people about Wilde’s west, through readings, dramatic interpretations, music and acting.

This is the 60th Clarenbridge Oyster Festival, a celebration of seafood which first began in 1954 and hasn’t missed a year since. Beginning on September 12, the week-long festival features an extravaganza of seafood, outrageous culinary treats, as well as art exhibitions, yacht races, fine wine and gourmet evenings, traditional music and dancing. This year featured acts include The Stunning, the Galway Bay Jazz Band, The Bluenotes and The Amazing Apples.

The centerpiece of entertainment at this year’s proceedings is The 2014 Diamond & Pearls 60th Oyster Gala which begins at 4.30pm on Saturday, September 13, going on till very late.

So why is the Clarenbridge oyster so famous? Well, quiet simply for the taste — it’s unrivalled. Probably nowhere else in the world can match the perfect conditions that exist in Clarenbridge for growing and harvesting oysters — a sheltered bay, a perfect ratio of fresh and salt water and added to this the skill and knowledge of a community who’ve been harvesting the bivalves for the last couple of thousand years.

Now in its fourth year, Guinness Live in The Latin Quarter will be a four day music festival featuring an extensive line-up of national and local acts. The gigs take place in intimate venues and pubs throughout the city’s Latin Quarter, with more than 50 live performances over four nights.

Admission to all gigs is free and on a first-come, first-served basis.

Most places would be happy to host one internationally renowned festival for bivalves — Galway has to gild the lily with two. Still, the oysters are certainly good enough to merit two such gatherings and the International Oyster Festival is one of the biggest events in Ireland’s social calendar.

A feast of live entertainment, gourmet food, fine wine and of course Oysters and Guinness are enjoyed by some 10,000 people with guests and luminaries from all over the world.  The Oyster Opening Championships is the main happening — but several events have no prizes, including dancing, jazz, parades and stuffing yourself at seafood lunches.

Chester boasts plenty of history as one of Europe's "prettiest towns"