IT was a night of celebration and occasion that marked the return of The Irish Post Awards last Thursday.

Over 400 people from across Britain descended on London's Dorchester Hotel on Halloween night to enjoy an evening of entertainment and pay tribute to success of the Irish business community here.

Returning as Master of Ceremonies was broadcaster Eamonn Holmes, who described the evening as "a night of great optimism".

Scroll down for a full gallery of images from the night

Global dance superstar Michael Flatley was one of four people honoured at the black tie event.

Attending the gala dinner and awards with his stunning wife Niamh, he spoke of his delight at being honoured by the Irish community in Britain.

The dancer and choreographer first shot to fame in the 1994 Eurovision Song Contest interval act Riverdance, and has created and produced scores of highly successful dance shows including Lord of the Dance, Feet of Flames and Celtic Tiger. 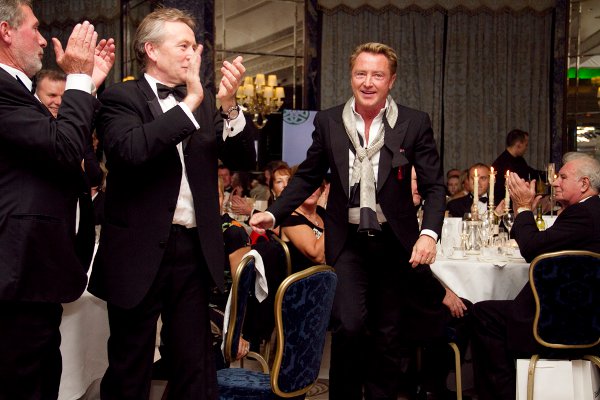 Michael Flatley gets up to accept his award

He spoke too of his great desire to encourage the next generation of young dancers from around the world to follow their dreams.

Mr Flatley was joined among the award-winners by Ray O’Rourke KBE, executive chairman of global construction firm Laing O’Rourke, who was given the gong for Outstanding Contribution to Business in Britain.

The Mayo-native said: "Britain has always been good to me and is a great place to do business in.”

Meanwhile, founder and CEO of Alexander Mann Solutions Rosaleen Blair accepted the award for Company of the Year. It was quite a day for the Dubliner who had just sold her company to US private Equity firm New Mountain for £260million.

Ms Blair, who is a former Veuve Clicquot Businesswoman of the Year, said an award from the Irish community was "very special". "It really means so much to me," she added.

Addison Lee chairman John Griffin completed 2013's fantastic business four when he accepted his award - all were specially crafted by the Crafts Council of Ireland and designed by artist Michele Hannan - for Business Person of the Year. 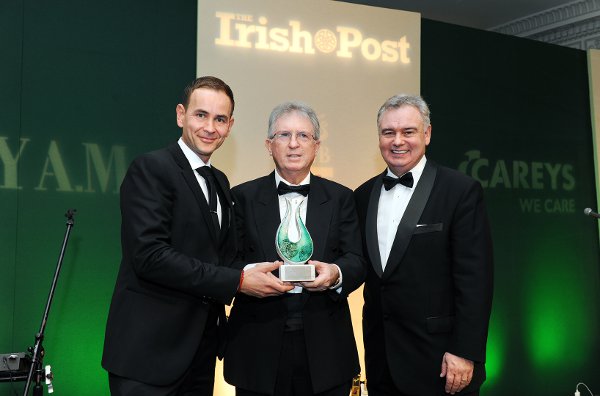 Earlier this year the Irishman also sold his minicab business, which started in the seventies with one car, for £300million to US private-equity giant Carlyle.

Heralding the positive impact of Irish people in Britain’s economy, Irish Post Editor Siobhán Breatnach said: “At a time when economic and trade relations between our two countries are being prioritised at the highest levels of Government, the Irish are playing their part.”

She added: “From traditional industries such as construction to technology and emerging companies, green shoots are springing up in towns and cities across England, Scotland and Wales.”

This evening also brought together key speakers and personalities from the world of business with some of the most famous faces of the Irish in Britain. It was attended by award-winning fashion designer Paul Costelloe and author Jeffrey Archer.

Minister Howlin said: "It was a pleasure to meet so many inspiring Irish people who have really made their mark on the business world here on Britain I enjoyed meeting so many dynamic members of the Irish community and congratulate The Irish Post for bringing together a gathering with so many people engaged in celebrating the global Irish and their impact in London and beyond." 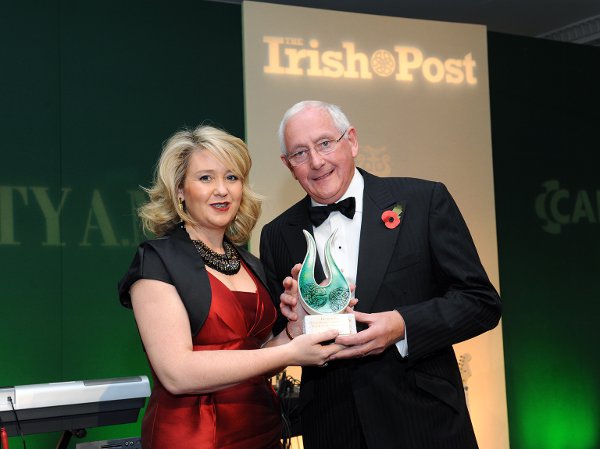 City A.M. Editor Allister Heath and New York-based irishcentral.com founder Niall O’Dowd were the keynote speakers at the event, giving their thoughts on the Global Irish and the British-Irish economic relationship.

“Our Business Gala Dinner and Awards is the only event which brings together Irish business leaders and success stories from all sectors across Britain to celebrate that success, share knowledge and create further valuable business connections,” said Irish Post Regional Editor Fiona Audley.

She added: “This unique occasion offers a rare chance to champion the best of Irish business minds from London to Birmingham, Manchester, Leeds and beyond; to reflect on what has been a bountiful year of business in Britain for many and to support the growth of our Irish network nationwide to secure continued success for our business community in 2014.” 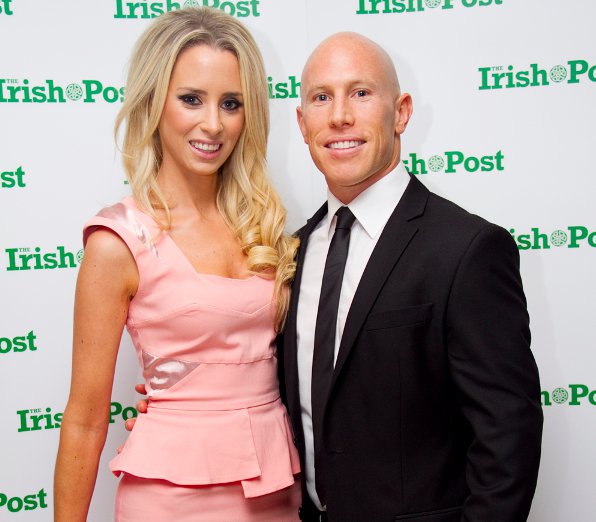 The Awards night also saw the release of The Irish Post’s In Business 2013 magazine, which profiles the most significant Irish business leaders in Britain, spanning industries from tourism to transport, retail to finance and hospitality to the arts.

The publication also incorporates The Irish Post’s Legal50, which acknowledges the contribution and excellence of leading legal minds.

Music on the night was provided by Irish Heritage musicians Jean Kelly on harp and soprano Daire Halpin, with The Main Attraction bringing proceedings to a close.

The Irish Post Music Awards to launch in Ireland this summer