Medieval wood confessionary found inside St. Malo's Church in the Brittany province of France. It's a free service offered to all sinners who want to confess

CONFESSING your sins to your priest isn’t the most enjoyable of tasks, and one aphoto shows it can be pretty trying for priests too.

The sign, posted on Reddit, by a user named BlackPharaohX appears to have been written by an Irish priest and hung in the church for all to see.

It states very clearly that confession will not be heard after 5.30pm sharp.

It also warns mass goers to make their confession "direct" and "to the point".

It goes on to say there is no need to say why you committed the sin, basically it urges people to just confess and be gone.

In the Roman Catholic Church, the Seal of the Confessional is the absolute duty of priests to not disclose anything they learn from parishioners during the course of the Sacrament of Penance.

Roman Catholic canon law states that priests are “absolutely forbidden” from betraying this confidence and if found to do so, face excommunication.

One Reddit user agreed with the sign, expressing frustration at how long some spend making their confessions.

“It's a problem. Granddaughter recently made her first communion and had to do one last confession beforehand. I took her to confession on Saturday the day before. Confession time was only 45 minutes before the Saturday vigil mass. We got in line (figured I'd do it too since it's been awhile) and the first few people in line took their time. Vast majority of us got shooed away so the priest could perform the mass.” 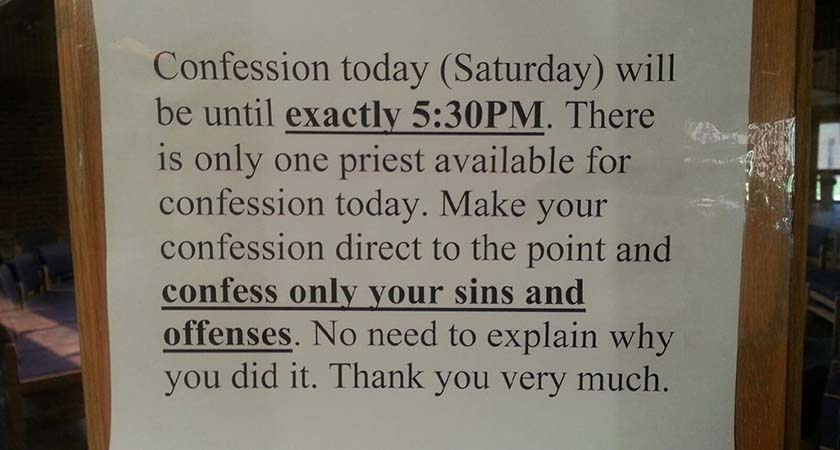