“THIS is a country of ruins. Lordly or humble, military or domestic, standing up with furious gauntness, or shelving weakly into the soil."

That was Dublin novelist Elizabeth Bowen talking about Irish terrain.

She certainly could have been talking about Galway. The landscape is festooned with crumbling castles, stone dolmens, fortified houses, derelict monasteries; ivy and hawthorn grapple at them inside and out, and sheep graze where once battles raged.

It is an infinitely melancholy yet utterly mesmerising landscape, and with the Wild Atlantic Way following the snarling coastline, you’re never far from the crashing sound of the ocean.

To explore this last outpost of the Old World and its rugged land, there are few better places to base yourself than the Connemara Coast Hotel in Furbo, some five miles west of Galway City. 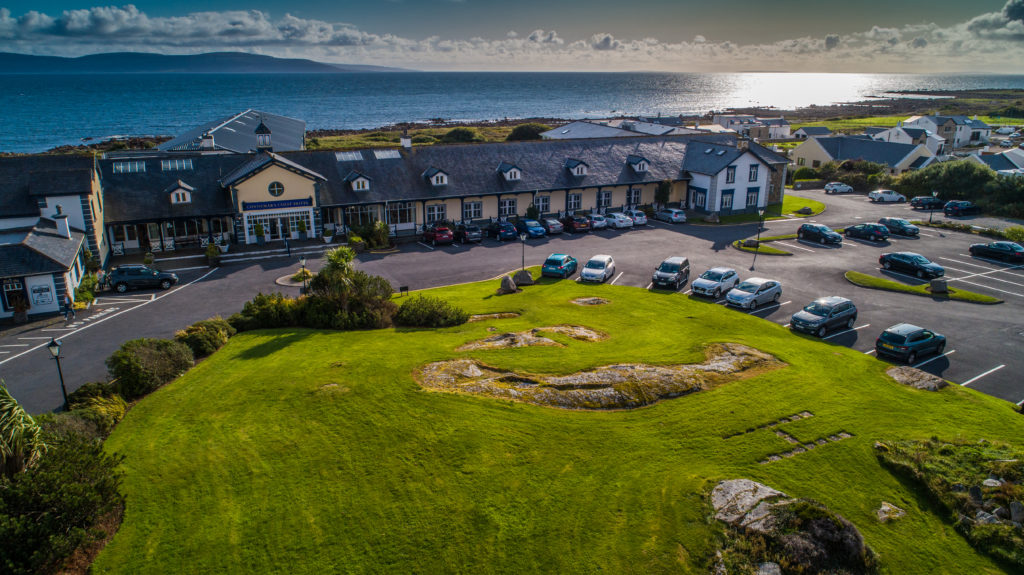 The Connemara Coast Hotel in Furbo

This 4-star luxury lodgings on the edge of Galway Bay, has dramatic views south towards Co. Clare, and in the other direction, if you stand on tiptoes, to America.

At night you can tuck up in bed, open the balcony doors and listen to the ocean. The only way you’ll get closer to the sound of the sea is by sleeping on the beach.

If you don’t fancy a few lengths of the 18.5-metre pool or take full advantage of the gym immediately on your arrival, you can limber up by strolling through the gardens, towards the hotel’s gazebo.

A few yards further on is the rocky foreshore of the bay. Later, for recovery, the jacuzzi and steam rooms should see you right.

By the way if love means nothing to you — in other words if you’re an avid tennis player, outside tennis courts are available too.

Just be careful though: your backhand half volley with topspin, if not executed with care, could end up in Galway Bay. 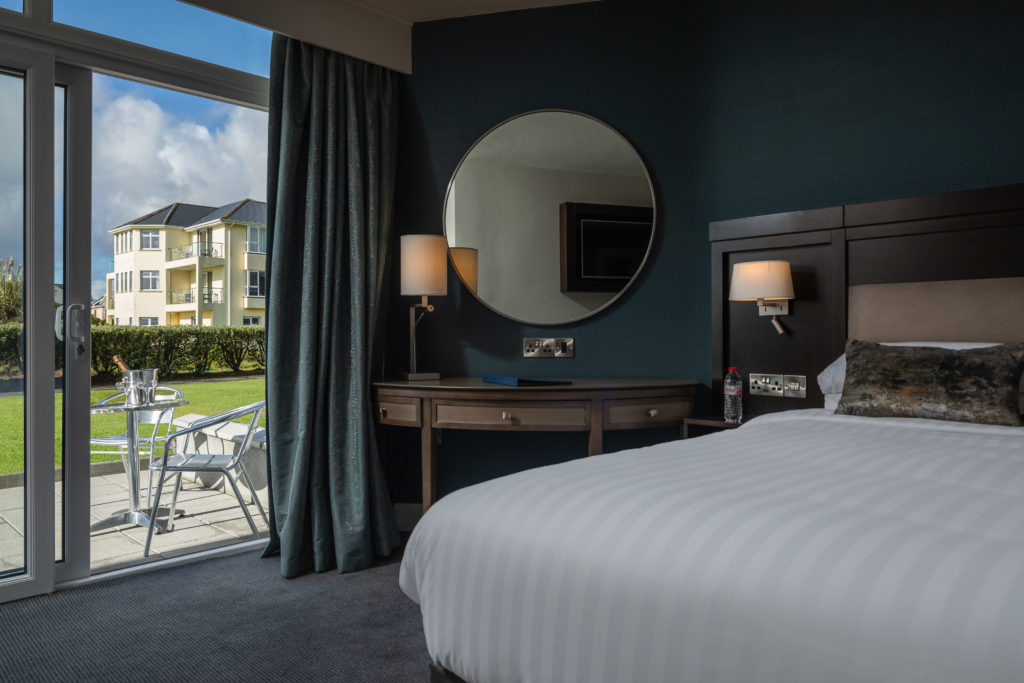 Basically, whether you’re a hunk or a chunk you’ll find something to suit your needs at the Connemara Coast.

The Connemara Coast also has that ultimate treat — an outdoor tub with a sea view. Lie back in the hot water, sip on a prosecco, and enjoy sheer luxury.

Which brings us to the two bars, complete with turf fires, pub grub available all day, and views across Galway Bay. You can wave at your tennis ball as it floats by.

The hotel is privately owned and run – so no bland standardisation here.

The overall feel is traditional and characterful while the service is efficient and modern.

In short, this is a palatial resort. 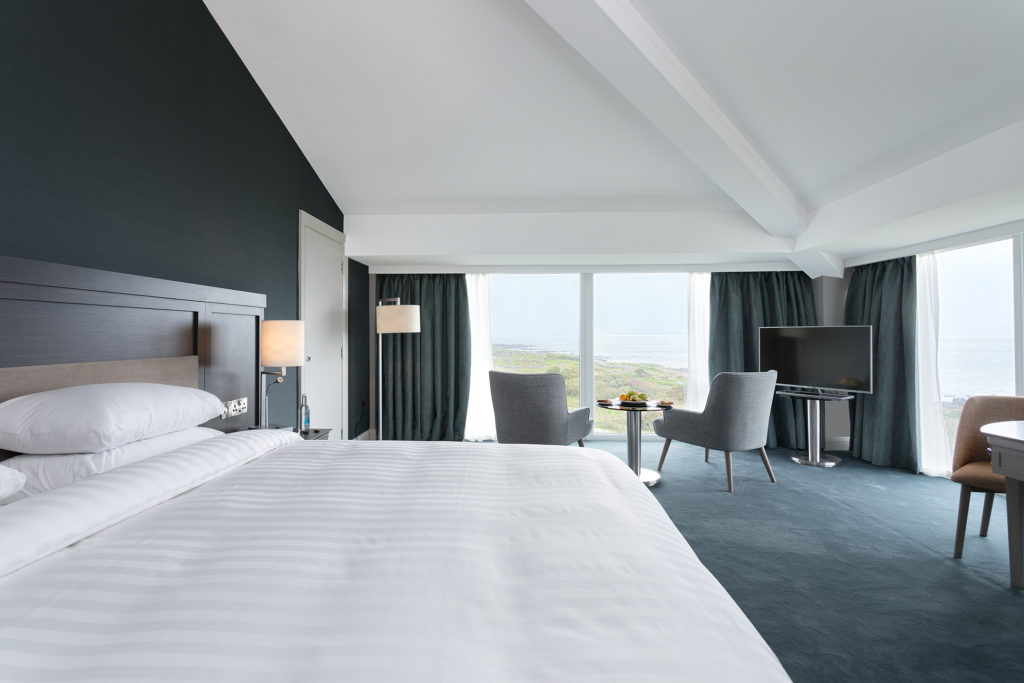 ...and it offers wall to wall views

The Galway Gaeltacht, the largest in Ireland, was home to the poet, academic and writer Pádraic Ó Conaire.

Born in 1882, he was orphaned at the age of eleven, thereafter living with his uncle in Garaffin, Ros Muc.

Soon the young Pádraic was fluent in the native tongue .

Emigrating to London in 1899 he landed a job with the British Board of Education.

Back then a university degree entitled a civil servant to extra money.

So as Patrick Conroy, the wily Galway man approached London University to sit a degree paper in Irish.

He could help set the required paper, Dr Hyde said.

So, for possibly the first time in British academic history, a candidate set, took and marked his own exam.

Naturally he passed with flying colours. There is a statue to him in Galway City.

Galway stretches from the wilds of Connemara through the Corrib country and on to the banks of the Shannon. 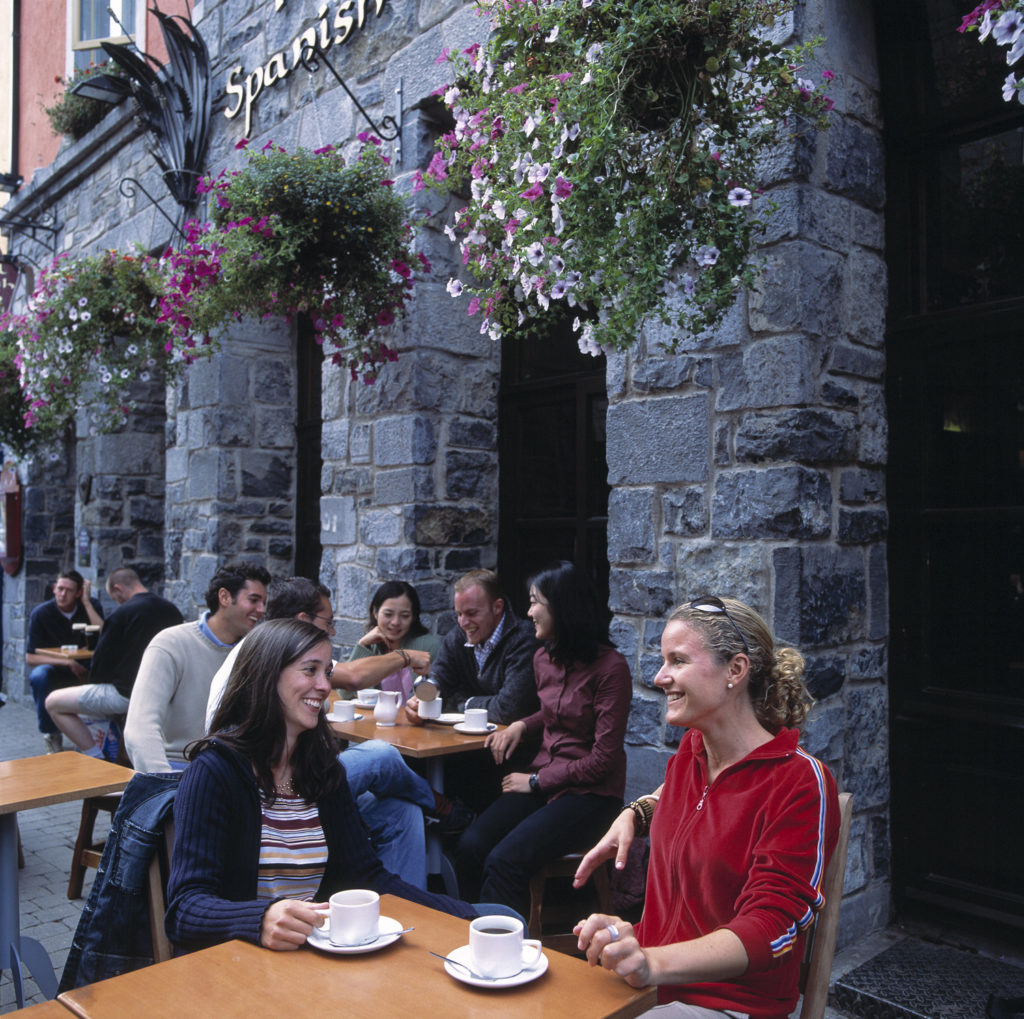 This west of the county, sandwiched between Lough Corrib and the Atlantic, is dominated by the majestic Twelve Bens mountain range and bordered by the Galway coastline, where Ireland eventually crumbles into the sea.

North Connemara is an area of exceptional beauty, with towering peaks, wild bogland and tiny crofts.

Life has always been hard here, with every scrap of land utilised.

Generations of Galway people have tried to scrape a living from the mean-spirited soil — some succeeded; many others emigrated.

In the 19th century even the bog cotton - the little white bogland plants that dance in the breeze - was put to use.

In the town of Carna in former times, a factory employed local girls to make buttons, using the bog cotton as a filling for the buttons. 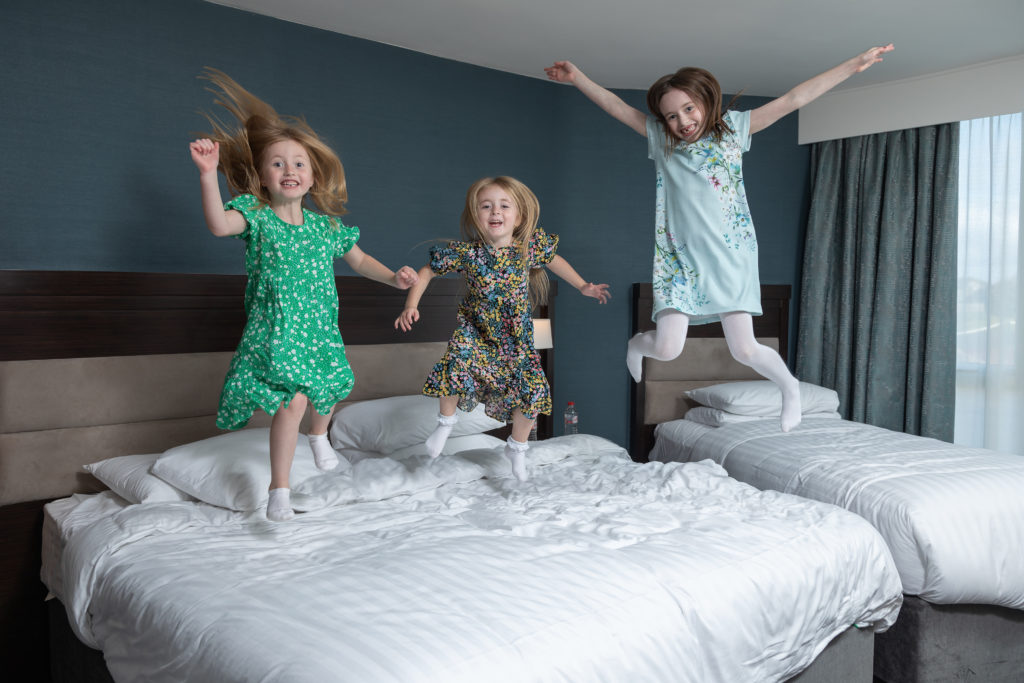 Fun for all the family at the Connemara Coast Hotel

Food, drink and craic in the city

Galway has more music pubs than you could reasonably shake a bodhrán stick at. For gigs of every type (rock to traditional), head for Roisin Dubh on Upper Dominick Street; if you want traditional music, Tigh Neachtain, Cross Street is a good bet, Whiskey drinkers: go to Garavan’s in William Street or Sonny Molloy’s in High Street. You’ll find something to your taste. Or head for Salthill, back out on the road to the Connemara Coast Hotel. Pádraic Ó Griallais runs the Micil distillery producing poitín (legally) using local Connemara botanicals.

Tours and tastings take place throughout the week, click here for more information.

Just off Shop Street in the old city  is Lynch’s Castle. The nearby Lynch Stone is reputed to be the very spot where Walter Lynch was executed — on the orders of his father Chief Magistrate James Lynch Fitzstephen. According to legend, young Lynch killed a Spaniard for flirting with his girlfriend.

In a display of possibly unrivalled jobsworthiness Mayor Lynch promptly had his son hanged for the deed, thus giving the English language a new word.

It would be fair to point out that most linguists dismiss this etymology for ‘lynching’.

The Lynchs, by the way, were one of so-called 14 Tribes of Galway, the merchant families who controlled the city and its hinterland from the mid 13th century to the 19th.

The Hall of the Red Earl was Galway’s 13th-century seat of power. The medieval archaeological site in the heart of the city was opened in 2010. Thousands of artefacts from Galway’s past were excavated and are today on show.

Nearby, The Spanish Arch, the last remnants of the old walls, along with the Spanish Parade make up perhaps the most distinctive part of Galway. This 16th century structure recalls the trade formerly carried on with Spain; its main purpose was to protect galleons unloading wine and spirits.

The museum’s permanent exhibition 'Galway — Within the Walls' is an excellent round-up of the city’s goings-on. Little is known about the place prior to the 12th century, but after that, no bother. Handbags between various factions are brought alive through a fascinating collection of objects, drawings, exhibits and paintings.

The museum also has an exhibition on our old friend and exam-taker extraordinaire Pádraic Ó Conaire.

More history, as well as salvation, is available at the Cathedral of St Nicholas, founded in 1320. This is the largest medieval parish church in Ireland, visited by many luminaries across the centuries including Christopher Columbus who worshipped here in 1492 before sailing west. 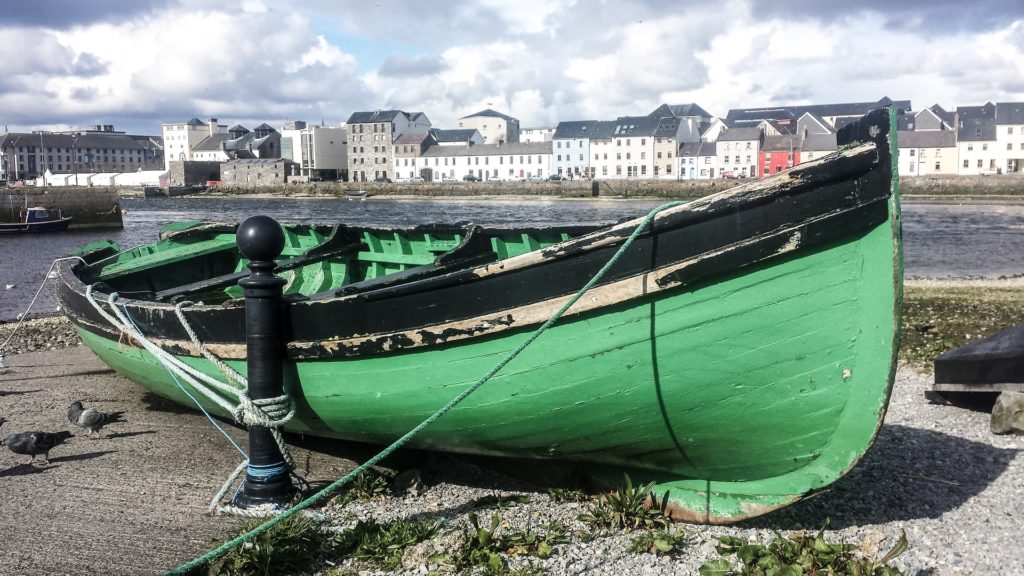 Galway is home to some of Ireland’s biggest shindigs including the Galway International Arts Festival held in July.

Highlights include Macnas, the Galway theatre group specialising in spectacular, visual storytelling. They parade through the city accompanied by music, throbbing drums and fire. Their procession through the town looks as if its plucked from a storybook’s scariest pages.

The Galway Jazz Festival is expected to return in the autumn of 2022. Expect blue-notes, diminished sevenths and hanging chords from jazz musicians of international renown.

The Connemara Coast Hotel is currently taking bookings for Christmas.

A choice of two packages is available: